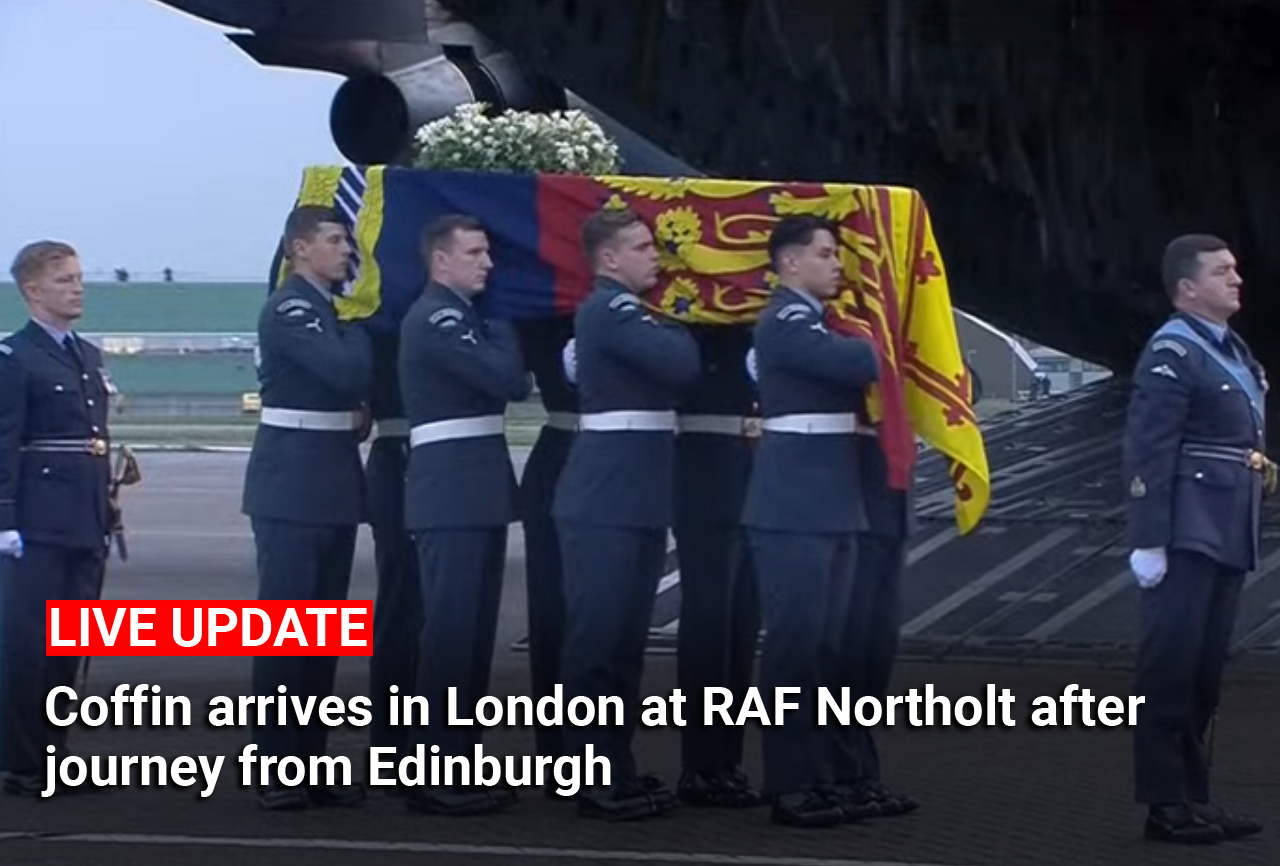 The Queen’s coffin has arrived in London on a flight from Scotland, escorted by the Princess Royal.

A RAF C17 aircraft carrying the casket has touched down at RAF Northolt in west London following a flight from Edinburgh.

It will shortly be taken to Buckingham Palace where it will be met by King Charles III and other members of the Royal family, including the Duke and the Duchess of Sussex.

The king has arrived back in London separately after a visit to Northern Ireland as part of his tour of the UK following his mother’s death.

He said the Queen had “never ceased to pray for the best of times for this place and its people”.

The RAF aircraft carrying the Queen’s coffin and the Princess Royal and her husband has touched down at RAF Norholt in west London.

The bearer party from the Queen’s Colour Squadron march into position as they await the Queen’s coffin at RAF Northolt in west London, from where it will be taken to Buckingham Palace to lie at rest overnight in the Bow Room.

Princess Royal: ‘An honour and privilege’ to accompany Queen

The Princess Royal, who is accompanying the Queen’s coffin on the journey from Scotland to London, has issued a statement paying tribute to her late mother.

“It has been an honour and a privilege to accompany her on her final journeys,” she said.

The Queen’s coffin: Journey through London

People have started lining the A40 Westway in London ahead of the arrival of the Queen’s coffin.

It is travelling from Edinburgh and is set to arrive at RAF Northolt in west London this evening.

The Queen’s coffin will be driven up the A40 before reaching central London, where it will travel past Lancaster Gate and Hyde Park Corner before arriving at Buckingham Palace.

The full route is:

People gather along the A40 to see Queen’s coffin

In Perivale, west London, people are gathering along the A40, along which a state hearse carrying the Queen’s coffin is expected to drive after it lands at nearby RAF Northolt.

Mr James, 52, added: “I think it is going to be hard to visit her coffin in Westminster so this is the last chance we will get to see it.”

People have gathered outside Buckingham Palace despite the rain to catch a glimps of the Queen’s coffin as it arrives from Edinburgh on Tuesday evening.

Queen Elizabeth Death Live Updates: Queen Elizabeth’s coffin has been escorted out of Edinburgh’s St Gile’s Cathedral and is now on its way to the airport from where it will be flown to London. The coffin was at the cathedral for 24 hours, where the public paid tributes to the late queen.  King Charles, who visited Northern Ireland today will receive the coffin in London.

Meanwhile, King Charles III on Tuesday reaffirmed his vow to follow the “shining example” set by his late mother, Queen Elizabeth II, in a speech at Hillsborough Castle in Northern Ireland during his state mourning tour of all parts of the United Kingdom. The 73-year-old monarch went on a brief walkabout in Hillsborough shortly after landing in Belfast for what is the first visit to the devolved nation by a British King in nearly 80 years.

In his first official since Queen Elizabeth’s death, her grandson Prince Harry hailed her as a “guiding compass” and praised her “unwavering grace and dignity. The personal statement, posted Monday on Harry and his wife Meghan’s Archwell website, said he cherished their times together “from my earliest childhood memories with you, to meeting you for the first time as my Commander-in-Chief, to the first moment you met my darling wife and hugged your beloved greatgrandchildren.”

The coffin of Queen Elizabeth II was carried out of St. Giles’ Cathedral in Edinburgh on Tuesday to begin her final journey through Scotland to a Royal Air Force plane that will carry her back to London.

A bagpiper played as the flag-draped coffin was carried out of the cathedral and crowds again lined the Royal Mile through the historic heart of Edinburgh to watch as the coffin, accompanied by the queen’s daughter, Princess Anne, was driven away.

Crowds again lined the Royal Mile through the historic heart of Edinburgh as the coffin, accompanied by the queen’s daughter, Princess Anne, was driven away. (AP)20:59 (IST)13 SEP 2022King Charles III’s plane leaves Belfast as he returns to London to receive his mother’s coffin

Hotel prices in London and airfares to the British capital are soaring as hundreds of thousands of people flock there ahead of Queen Elizabeth’s funeral on Monday, potentially providing some respite to the city’s tourism business amid economic woes.

The death of the queen, 96, on Sept. 8 ended a 70-year run on the throne that made her Britain’s longest-reigning monarch and one of the world’s most recognisable faces as the only British monarch most living people have ever known.

Since the announcement of her death, the average rate for a hotel in London increased to $384 per night from $244 per night, according to Hayley Berg, lead economist at travel startup Hopper. (AP)19:37 (IST)13 SEP 2022Arrests of UK anti-royal protesters spur free-speech debate

In a country famed for irreverence, some worry a new code of silence has taken hold.

Since the death of Queen Elizabeth II, a handful of people in Britain have been detained by police for expressing – often bluntly – anti-monarchy views.

A woman in Edinburgh holding a sign reading “F– imperialism, abolish the monarchy” was charged with a breach of the peace. A man faced the same charge after he heckled Prince Andrew as the queen’s hearse travelled through the Scottish capital.

In Oxford, peace activist Symon Hill was put in handcuffs after he shouted his opposition during a ceremonial proclamation of the new king. (AP)18:28 (IST)13 SEP 2022King Charles vows to seek welfare of Northern Ireland inhabitants

Britain’s King Charles said on Tuesday he would seek the welfare of the people of Northern Ireland, taking up the example of his mother late Queen Elizabeth.

“I take up my new duties resolved to seek the welfare of all the inhabitants of Northern Ireland,” Charles said, recalling the “shining example” set by his mother.

“At the very beginning of her life of service, The Queen made a pledge to dedicate herself to her country and her people and to maintain the principles of constitutional government. This promise she kept with steadfast faith.”  (Reuters)17:37 (IST)13 SEP 2022King Charles arrives in Belfast, greets crowd

King Charles III landed in Northern Ireland on Tuesday on the latest leg of his tour of the four parts of the United Kingdom, where crowds of well-wishers gathered to greet him in a region with a deeply contested British and Irish identity divided over the British monarchy. (AP)

British officials say some 500 foreign dignitaries will attend Queen Elizabeth II’s state funeral, but invitations have not been sent to the leaders of Russia, Belarus or Myanmar.

Officials said the funeral next Monday, to be held at London’s Westminster Abbey, will be the biggest international event Britain has hosted in decades.

US President Joe Biden was among the first to announce that he would be flying in with his wife, Jill Biden. The leaders of most Commonwealth countries, including Australia, New Zealand and Canada, are also expected to attend.

Japan’s Emperor Naruhito and Spain’s King Felipe VI and Queen Letizia, as well as former Spanish monarch Juan Carlos I and Queen Sofia, are also due to travel to London for the occasion. (AP)16:36 (IST)13 SEP 2022In Pics: Massive queues form as Queen’s coffin to travel from Edinburgh to London

Charles III: How the new king became the most pro-Islam monarch in British history