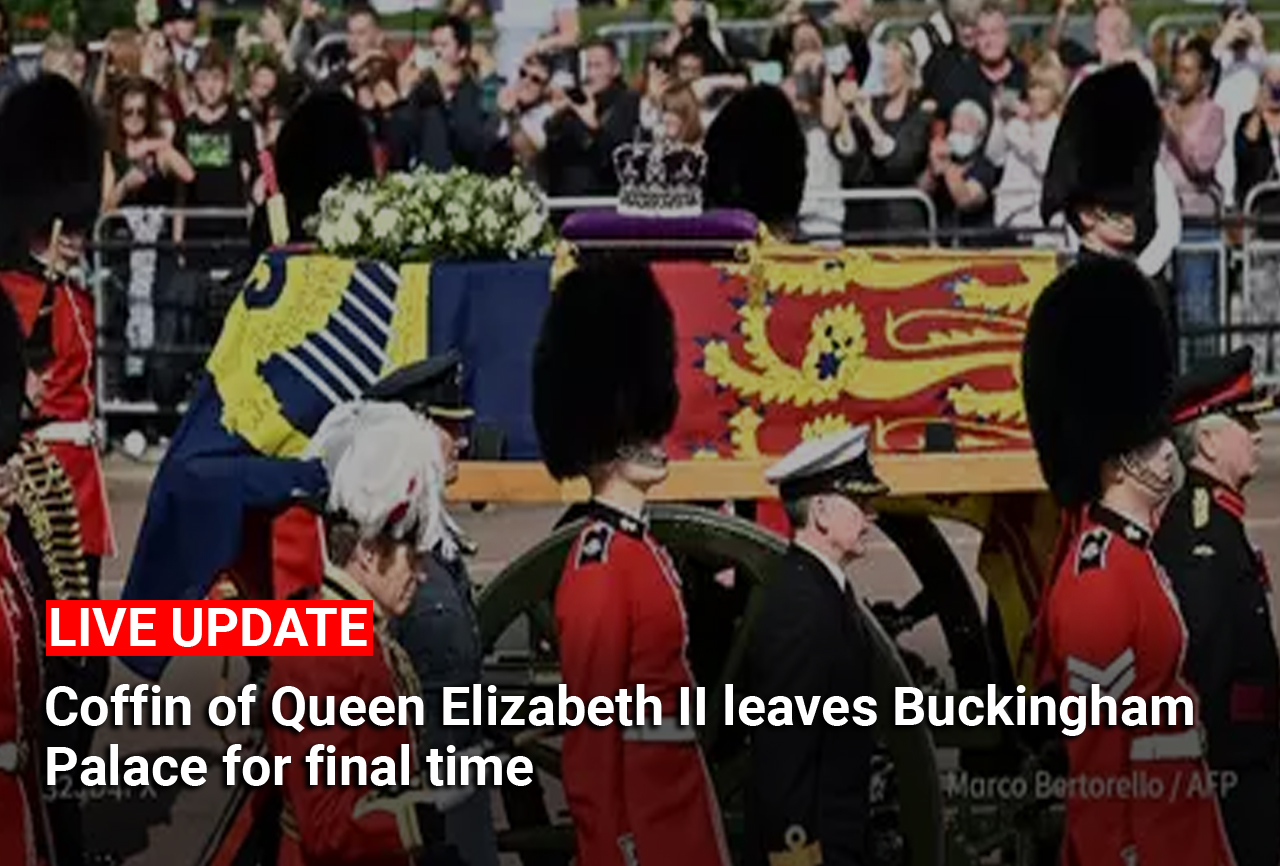 The coffin of Queen Elizabeth II left Buckingham Palace in London on Wednesday for the final time as it began its journey to Westminster Hall, where the late monarch will lie in state for four days19:23 (IST) Sep 14

The Queen’s coffin was draped in the Royal Standard and topped with the Imperial State Crown – adorned with almost 3,000 diamond

With the royal standard and crown of state resting on top of the coffin and artillery firing salutes at one-minute intervals, the solemn procession was designed to underscore Queen Elizabeth II’s 70 years as head of state19:18 (IST) Sep 14

The queen’s coffin is on a gun carriage from the King’s Troop Royal Horse Artillery19:18 (IST) Sep 14

Crowds have gathered in London to pay their final respects to Queen Elizabeth II. Her coffin will soon leave Buckingham Palace for the Houses of Parliament, where the late monarch will lie in state for four days18:59 (IST) Sep 14

Elizabeth II: Queen of the world

Elizabeth Alexandra Mary Windsor was not just Queen Elizabeth II. She was simply The Queen. For billions of people, she was the one constant in a world of bewildering change, an omnipresent matriarch linking the past with the present.

A British trade union on Wednesday criticised as “callous” a decision by the monarchy to issue redundancy notices this week to some staff at King Charles III’s former official residence. Up to 100 employees who work at Clarence House, including some there for decades, reportedly received the notifications on Monday during a prayer service in Edinburgh for the late Queen Elizabeth II. 17:05 (IST) Sep 14

The coffin of Queen Elizabeth II will make its final journey from Buckingham Palace in London on Wednesday, to be conveyed in procession to Westminster Hall in the Houses of Parliament complex for Lying-in-State until the state funeral at Westminster Abbey nearby on Monday.15:28 (IST) Sep 14

Troops involved in the procession have been preparing since the queen died.

Maj. Gen. Christopher Ghika of the Household division, who is responsible for organising the ceremonial aspects of the Queen’s funeral

Thousands of people are gathering on The Mall outside Buckingham Palace and along the banks of the River Thames hours before the coffin procession begins.15:24 (IST) Sep 14

Crowds began massing early along the flag-lined road outside the palace for the procession from the monarch’s official London residence to the historic Westminster Hall at Parliament.

King Charles III and other members of the royal family will walk behind the coffin.