Home ISLAMIC The Benefits and Virtues of Rajab, the Month of Allah 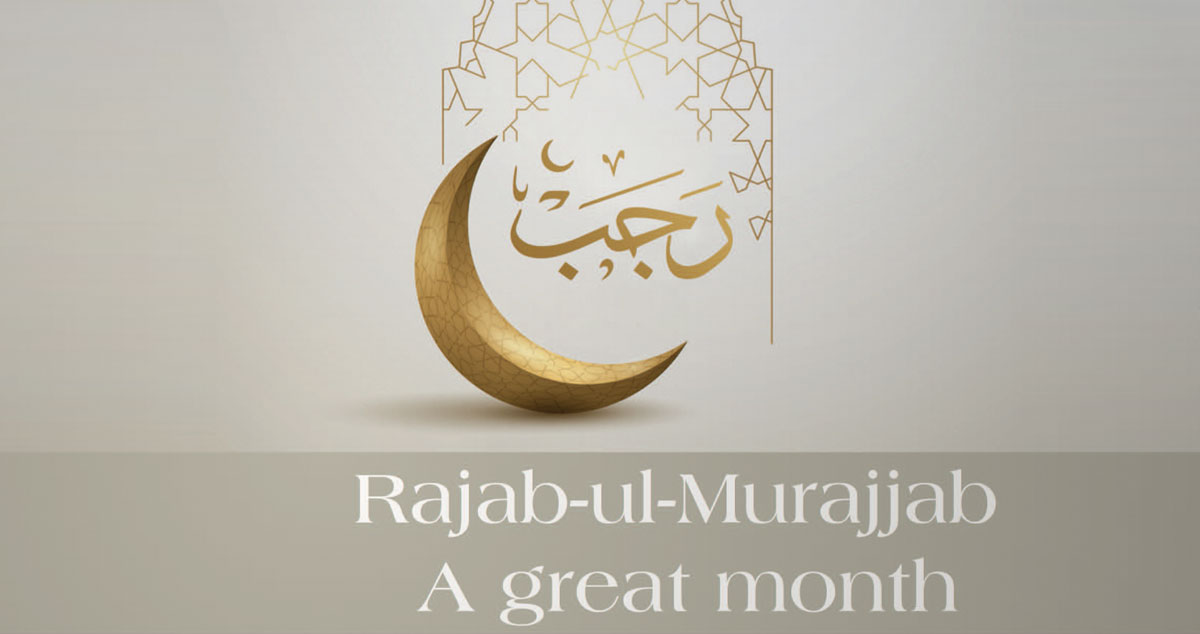 The above ayah references four sacred months, with Allah (swt) specifically commanding us not to wrong ourselves during them. (We’ll get to this command later!) The Prophet (saw) clarified what these months were in the following hadith:

′Time has come back to its original state which it had when Allah created the Heavens and the Earth; the year is twelve months, four of which are sacred. Three of them are in succession: Dhul-Qa‘dah, Dhul-Hijjah, Al-Muharram and Rajab of Mudar [a title of Rajab], which stands between Jumada (ath-Thani) and Sha‘ban’. [Bukhari]

This year, the sacred month of Rajab will most likely begin on Tuesday 1st February 2022, at Maghrib time. Allah has chosen Rajab above other months to be sacred, so of course, we must pay special attention to this period and ensure we are acquainted with its virtues!

Without further ado, let’s take a look at the history and purpose of the sacred months, the virtues of Rajab in particular, and how we can make the most of this time!

The history of the sacred months

Since the beginning of time, fighting has been forbidden during the sacred months. The sequence of the sacred months protected pilgrims to the Ka’bah both before the advent of Islam and during its early days. They were divinely designed to allow pilgrims safe passage to and from Makkah during the Hajj season.

Meanwhile Rajab, the seventh month of the lunar year, stands apart from the other sacred months. It is thus called ‘Rajab al-Fard’ or ‘Rajab the Separate One’. Allah made it sacred in order to preserve people’s safety during ’Umrah, the minor pilgrimage.

Unfortunately, many of the Arabs in pre-Islamic times didn’t respect the sanctity of Rajab, and they often switched it to elsewhere in the year so they could fight in the seventh month! They would pretend that Rajab was in a different month to suit their own political agendas.

The exception was the tribe of Mudar, who consistently observed the order of the lunar months and the sanctity of Rajab. Thus, when the Prophet (saw) was confirming the sacred months for us, he named it ‘Rajab of Mudar’, so the Companions knew he (saw) meant the seventh month of the lunar year.

The purpose of the sacred months

As mentioned above, the sacred months allowed pilgrims to travel safely to and from the holy lands. This particular purpose is less relevant today, when we don’t need a whole month to travel to Makkah!

Our deeds weigh heavier on the scales during these four months. Allah commands us: ‘Do not wrong yourselves during them’ [The Noble Qur’an, 9:36], because it is graver to commit a sin during a sacred month. Equally, it becomes more rewardable to perform a good deed!

Thus, we need to be extra-vigilant in everything we do and say this Rajab, and extra-keen in seeking Allah’s pleasure:

The first virtue of Rajab

Rajab has three main virtues which we will cover in this article. The first of them is that it is the month of Allah.

Subhan’Allah, this is a great title to be honoured with, and no doubt we should be paying special attention to the month that bears this honour.

The second virtue of Rajab

Rajab was divinely selected for three historic and momentous events:

SubhanAllah, while most Muslims – rightfully! – give importance to Ramadan as the month in which the Qur’an was revealed, we must not neglect Rajab’s status. Not only was the Prophet (saw) conceived in Rajab, we also received three further divine gifts during Al-Isra’ wal-Mi’raj:

(In sha’ Allah, we will discuss these divine gifts more in a future blog post).

It is clear, therefore, that Allah chose Rajab above other months for extraordinary events.

The third virtue of Rajab

Did you know that Rajab is also known as ‘Rajab al-Asabb’ or ‘the Pouring Rajab’? This is because Allah pours His numerous blessings and favours down during this month, as well as His abundant mercy.

Similarly, Rajab is also known as the Month of Tawbah (repentance) and the Month of Istighfar (seeking forgiveness).

Again, most Muslims – rightfully! – increase their good deeds and worship during Ramadan, hoping to receive the blessings and mercy which are pouring down. But we also have a chance to do this during Rajab, and we definitely shouldn’t miss out! Remember, our deeds weigh heavier on the scales in the sacred months, so this is an excellent opportunity to invest in our akhirah.

The meaning of ‘Rajab’ and its titles

Before we go into the recommended actions for Rajab, we’d like to touch on a few of its names.

This amplifies the meaning of the sacred month, in which war and fighting were unlawful since the beginning of creation. This rule was even respected by some of the pre-Islamic Arabs in the Time of Ignorance (Jahiliyyah).

To further emphasise its sanctity, Rajab is also called ’Rajab al-Murajjab’, which means that it is extraordinarily honoured, revered and magnified.

Moreover, it is called ‘Rajab al-Asamm’, which means ‘the Deafening and Silent Rajab’. This is because you cannot hear the clashing of swords during Rajab, as fighting is prohibited.

Earlier, we mentioned that it is called ‘Rajab the Separate One’, because it stands alone as a sacred month.

Finally, there is one more linguistic wonder we’d like to mention. Some scholars have mentioned that ‘Rajab’ is composed of three letters, which represent other profound words:

As you can see, even the meaning of ‘Rajab’ reflects its virtues in so many ways.

It is highly recommended to turn to Allah on the first night of Rajab. Though we don’t have an authentic hadith of the Prophet (saw) regarding this, many scholars have mentioned the virtues of this night.

Moreover, it has been narrated that Ali ibn Abi Talib (ra) used to spend four nights in worship: the first night of Rajab, the nights before the two Eids, and the 15th night of Sha‘ban.

In light of the above quotes, we should make sure to make du’a to Allah on the first night of Rajab!

Make sure to make a list of du’as which you really want Allah to answer, so you are fully-prepared when the night begins!

Recommended: Seek forgiveness throughout the month

It has been narrated, ‘Seek much forgiveness from Allah in Rajab because in every hour (of the month) Allah frees people from the Fire’. [Dailami]

We recommend saying this short and powerful du’a every day in Rajab:

Recommended: Prepare for Ramadan in Rajab

There are now only two months to go until Ramadan! It is essential that we start preparing from now, laying the foundations of good habits and making a plan of action for this blessed month.

This imagery perfectly describes the significance of each month in the lead-up to Ramadan! In Rajab, we should be laying foundations and making preparations; in Sha’ban, our preparations will become more tangible and our increased worship will become habitual – and in Ramadan, our good deeds will overflow, in sha’ Allah!

So how can we use Rajab to prepare for Ramadan? Here’s our simple, three-step plan:

One: To start with, you have to make a good intention. The Prophet’s (saw) du’a is perfect for this:

Two: Write down everything you regret NOT doing last Ramadan. Did you find it difficult to pray at night? Did you put off making up fasts until two weeks before Ramadan? Did you forget to make certain du’as?

Three: Make a plan for addressing these issues during Rajab. For example, you could start praying at night once a week. You could start fasting on Mondays or Thursdays (or both!) from now. You could make a list of du’as that you must make, so you can check them off every day in Ramadan.

Remember to set realistic and tangible targets so you can make real progress during Rajab.

Recommended: Understand the weight of a sacred month

Above all, remember that a sacred month is similar to a sacred place. We know that it is recommended to bathe and purify oneself before entering the haram of Makkah, and become more conscious of the weight of our actions. Likewise, we should try to enter a sacred month in a state of purity, and strive to maintain that purity throughout the month.

For example, the Messenger of Allah (saw) recommended fasting at least some days in each of the sacred months. Some of the Companions, among them Umar (ra) and his son Abdullah (ra), and Aisha (ra), liked to make ’Umrah in Rajab.