Home NEWS Charles III: How the new king became the most pro-Islam monarch in British history 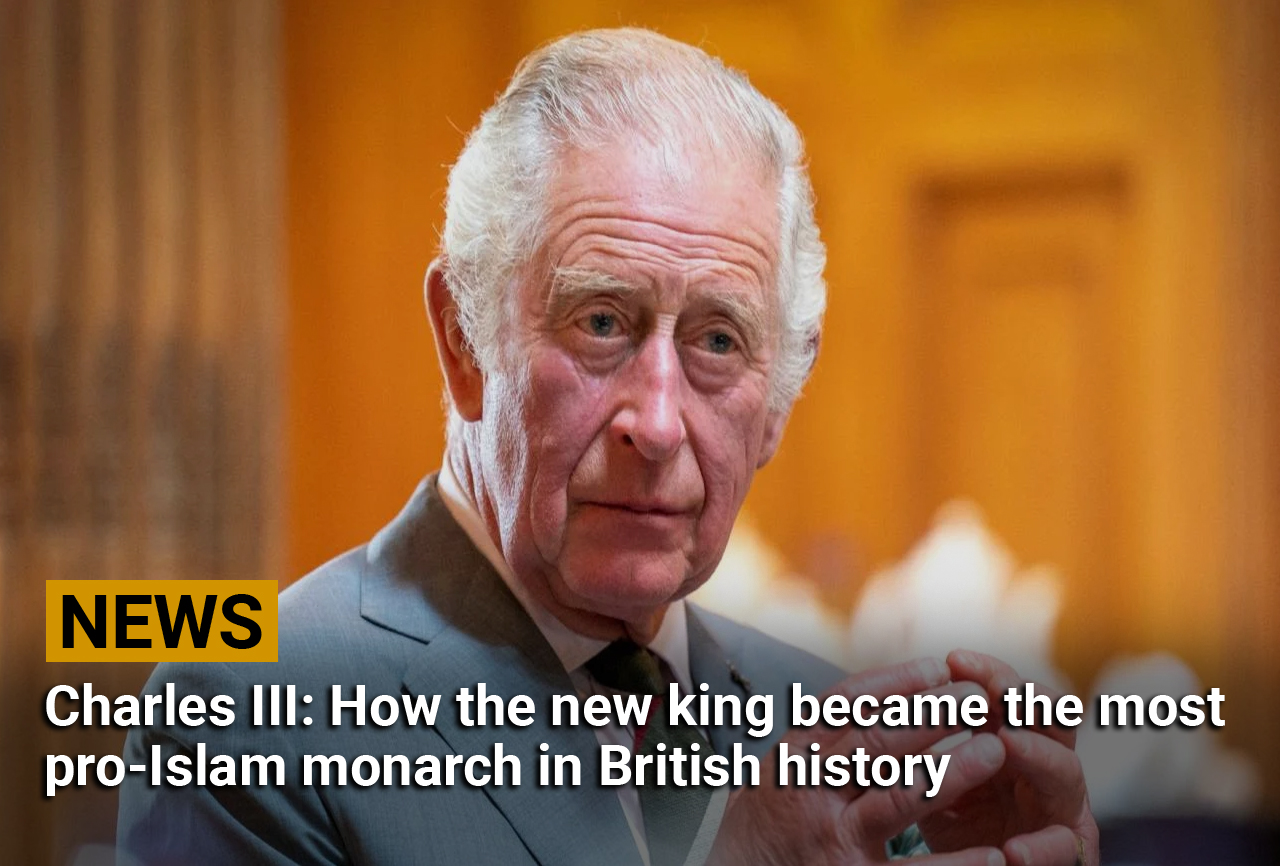 A thoughtful man, he has studied Islam deeply, even going to the lengths of learning Arabic in order to read the Quran

Last week, Liz Truss took over as prime minister of what many consider to be the most Islamophobic government in British history.

A government which refuses to engage with the largest representative body of British Muslims and has framed an invidious security regime (Prevent) which targets them; in which a minister was sacked because her “Muslim woman minister status was making colleagues feel uncomfortable”. A government accused this week of treating Muslims like second-class citizens.

Little surprise: more than half of the members of the ruling Conservative Party entertain wild conspiracy theories about British Islam.

Two days after Truss became prime minister, King Charles III acceded to the British throne. A thoughtful man, he has studied Islam deeply, even going to the lengths of learning Arabic in order to read the Quran.

The new king is the most Islamophile monarch in British history. The contrast with his government is stark.

In a series of statements dating back several decades, King Charles III has rebutted the “clash of civilisations” thesis which argues that Islam is at war with the West. On the contrary, he argues that Islam, Judaism and Christianity are three great monotheistic religions which have far more in common than is generally appreciated.

Since 1993, the new king has been a patron of the Oxford Centre for Islamic Studies. In that year he delivered its inaugural address, entitled “Islam and the West”. It wasn’t the sort of speech on religion that most people expect from politicians and royals; they tend to utter little more than empty platitudes.

Then Prince of Wales, he launched into a sophisticated musing on Islamic civilisation and its relationship with Europe. The prince said that Islam is “part of our past and our present, in all fields of human endeavour. It has helped to create modern Europe. It is part of our own inheritance, not a thing apart.”

He urged people in the West to see past contemporary distortions of Islam: “The guiding principle and spirit of Islamic law, taken straight from the Quran, should be those of equity and compassion.”

He noted that women were granted the right to property and inheritance in Islam 1,400 years ago, paid tribute to the “remarkable tolerance” of medieval Islam, and lamented western “ignorance about the debt our own culture and civilisation owe to the Islamic world”.

The then-prince described Britain’s Muslim communities as an “asset to Britain” who “add to the cultural richness of our nation”.

Unlike those who demand that Muslims discard their identities in order to assimilate, Charles called for a process of two-way integration: Muslims must “balance their vital liberty to be themselves with an appreciation of the importance of integration in our society”, while non-Muslims should adopt a “respect for the daily practice of the Islamic faith and a decent care to avoid actions which are likely to cause deep offence.”

It was an electrifying speech: here was the heir to the throne telling Britain’s Muslims, most of them migrants from the former colonies, that their presence in the country was not just welcome but valued.

It’s hard to conceive of a greater contrast with recent interventions by Britain’s most senior politicians.

In more recent years Charles’s attitudes towards Islam and the Muslim world have often caused controversy.

A 2018 book by royal correspondent Robert Jobson, written with the cooperation of Charles’s office, revealed that he opposed the 2003 invasion of Iraq, privately voicing his objections to Prime Minister Tony Blair. According to Jobson, Charles believed that “marching in carrying a banner for western-style democracy was both foolhardy and futile”. Charles has also told ministers that he no longer wishes to have his connections with Gulf leaders used for British arms companies to sell weapons.

Then there’s his sympathy towards the Palestinians, which may be why it was his son Prince William, and not Charles himself, who carried out the first royal visit to Israel in June 2018. It was only in 2020 that Charles made his first visit to Israel. He took care to visit the Occupied Palestinian Territories, where he declared it his “dearest wish that the future will bring freedom, justice and equality to all Palestinians”.

If Charles returns to the subject of Islam, he is certain to open himself up to brutal criticism from the neoconservative right

Charles has come under fire for his charity work. Last June, the then-prince was in the headlines after the Sunday Times revealed that he accepted a suitcase containing a million euros in cash from Sheikh Hamad bin Jassim bin Jaber Al Thani, the former Qatari prime minister. Charles’s charitable fund denied wrongdoing and there’s no suggestion at all that he benefited personally.

He may have made errors of judgement, but much of the press reporting has been ignorant and unfair.

Consider the flurry of sensational articles in July about a million-pound donation his charitable fund received from the family of Osama Bin Laden in 2013. There was no wrongdoing: the Bin Laden family is one of the most established in Saudi Arabia, and the implication of a connection with terrorism and Al Qaeda was nonsense.

Anti-Muslim commentators mock Britain’s new king for his intellectual curiosity. The American neoconservative commentator Daniel Pipes is one example. His blog post entitled: “Is Prince Charles a Convert to Islam?” cites numerous pieces of “evidence” that he himself has become Muslim, including that Charles took part in a fast-breaking ceremony in Ramadan and his criticism of Salman Rushdie for insulting the “deepest convictions” of Muslims.

A century ago, similar false rumours once swirled around Winston Churchill.

In truth, the king is a devout Anglican whose deep engagement with Islam (as well as Judaism and Orthodox Christianity) is connected to his interest in Traditionalism, the esoteric 20th-century school of thought whose early proponents railed against the modern world, believing that all the great religions share universal truths that could be antidotes to contemporary woes.

In an address to the Church of Scotland’s General Assembly in 2000, Charles warned that our age is “in danger of ignoring, or forgetting, all knowledge of the sacred and spiritual”. It’s this concern which underpins his environmentalism. Charles believes that the modern West “has become increasingly acquisitive and exploitative”, suggesting that we can re-learn the “trusteeship of the vital sacramental and spiritual character of the world” from Islam.

Guenon himself looked to the east, writing several books on Hinduism and Taoism before leaving Paris for Cairo. There he became initiated into the Ahmadiyya Shadhiliyya Sufi order and studied at Al Azhar, one of the world’s centres of Sunni Muslim scholarship. He died a Muslim in Cairo in 1951.

Guenon’s role in shaping the king’s worldview has bewildered many mainstream commentators. Military historian Max Hastings is one case in point. In a review of Charles’s 2010 book Harmony: A New Way of Looking at Our World, he wrote in the Daily Mail that the “chief peril to our royal institution in the decades ahead lies within his well-meaning, muddled, woolly head.”

Undeterred by the disapproving gaze of the British media, Charles used his position as Prince of Wales to further his ideas in a practical sense. In 1993, The Prince’s Foundation began to house the Visual Islamic and Traditional Arts Programme.

Will Charles quietly emphasise Britain’s traditions of tolerance and multiculturalism, in contrast to the nationalism of the Johnson and Truss governments?

It remains to be seen whether, on the throne, he will continue to speak about religion as openly as he did when he was Prince of Wales. He needs to bear in mind the lesson of his mother, who astutely steered clear of public controversies. It is nevertheless profoundly significant that we have a king who openly admired Islam.

Mosques across the country wished their condolences on the death of Queen Elizabeth, and many Muslims have been noting the new king’s attitudes towards Islam.

In his sermon before the prayer last Friday in Cambridge’s eco-friendly mosque, Shaykh Abdal Hakim Murad, the University’s Shaykh Zayed Lecturer in Islamic Studies, quoted extensively from Charles’s 1993 speech on “Islam and the West”, reflecting that Charles’s generous interest in Islam set him apart from much of the British political class. Noting that Charles learnt Arabic to read the Qur’an, he asked: “How many people in Parliament would do that?”

Will Charles follow the gentle example of his mother and quietly emphasise Britain’s traditions of tolerance and multiculturalism, in contrast to the nationalism of the Johnson and Truss governments?

There is some evidence that he will.

Consider King Charles III’s first address as sovereign: “In the course of the last seventy years, we have seen our society become one of many cultures and many faiths,” he said, before promising that “whatever may be your background or beliefs, I shall endeavour to serve you with loyalty, respect and love”.

This was a bold and unequivocal statement of pluralism. And anyone who has paid attention to Charles’ pronouncements and actions as Prince of Wales will know that he means it sincerely. It is a position that sets him apart from the British government.

The views expressed in this article belong to the author and do not necessarily reflect the editorial policy of Middle East Eye.

This article is available in French on Middle East Eye French edition.