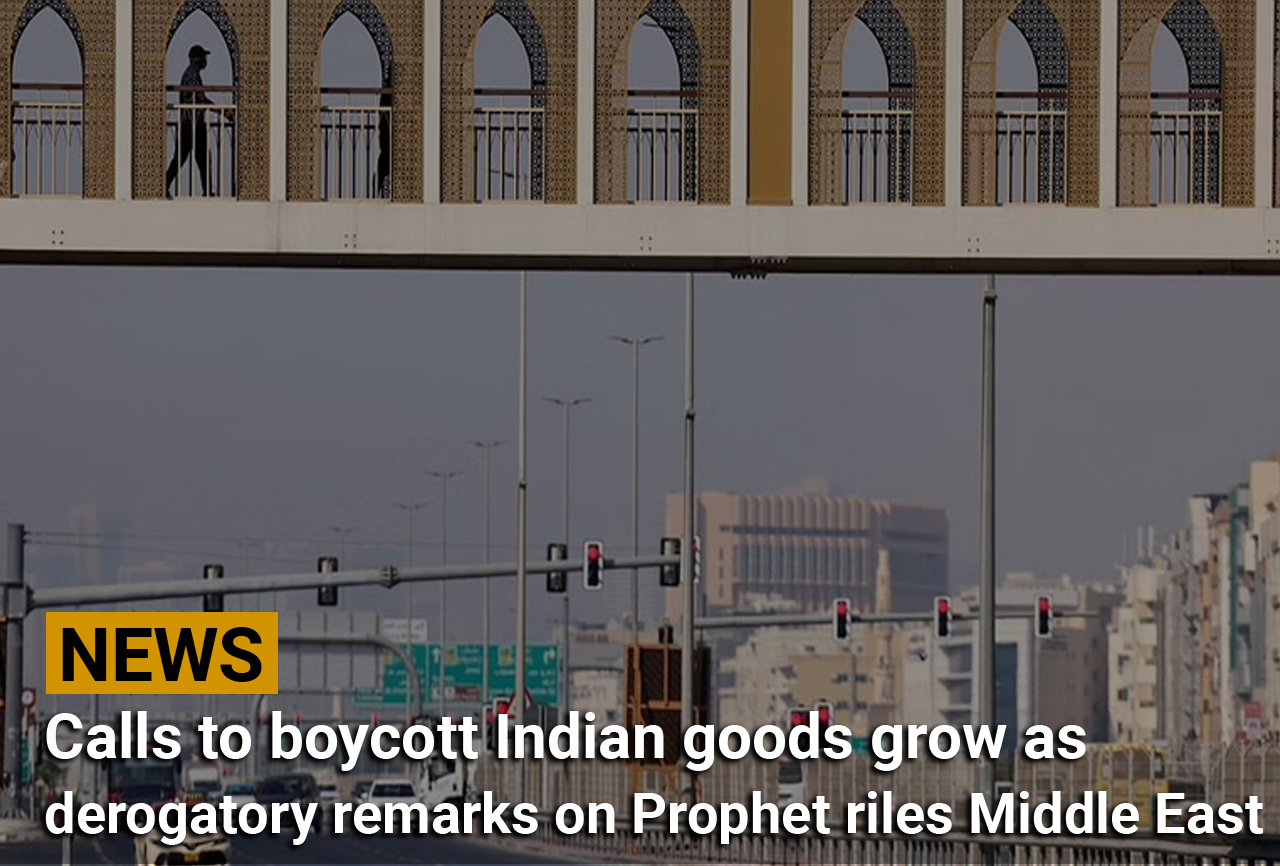 #BoycottIndiaProducts and #Stopinsulting_ProphetMuhammad were trending on Twitter and Facebook in several Gulf countries for derogatory remarks on Prophet made by members of ruling BJP.

India is coming under fire in the Middle East for derogatory remarks on Prophet Muhammad made by members of the ruling Bharatiya Janata Party, sparking online calls for boycotts in a region that accounts for more than a tenth of the South Asian country’s total trade.

#BoycottIndiaProducts and #Stopinsulting_ProphetMuhammad were trending on Twitter and Facebook in several Gulf countries. It was a spillover from a spat over the weekend that saw Qatar, Iran and Kuwait summon Indian envoys to protest the comments made by two members from Prime Minister Narendra Modi’s party.

A boycott poses a further headache for Modi who spent the last eight years building ties with the Middle East countries to draw in investments and to build markets for Indian grains, clothing and machinery. While it remains to be seen if this will gain traction, a supermarket in Kuwait has removed Indian rice, spices and chillies from its shelves, AFP reported.

Both the United Arab Emirates and Saudi Arabia make up about 10% of India’s $1 trillion trade. The region accounts for more than half of the South Asian country’s oil imports.

Millions of Indian workers also power the economies in the Middle East and six Gulf countries alone account for over half of worker remittances to the South Asian nation.

India’s government has sought to downplay the impact of the controversy on trade ties with the Middle East. Minister for Commerce and Industry Piyush Goyal said Gulf countries had only said that such statements against Prophet Muhammad shouldn’t be made, local media reported late Tuesday.

“All the Indians living in Gulf countries are safe and do not have to worry,” Goyal was cited as saying by the Indian Express. “With all these countries, we have a very good relationship and our relations will continue to be very good.”

There’s no implicit or explicit threat from any of these Middle Eastern governments that there will be any economic repercussions, said Sushant Singh, Senior Fellow at Centre for Policy Research.

“The damage is still limited to the kind of local condemnation that has come from foreign ministries of the governments,” he added.

The international furore shines a spotlight on India’s domestic politics. Modi and the BJP have fast-tracked a Hindu nationalist agenda after winning a sweeping mandate for a second term in 2019 and have retained the support of voters with a strong victory in a recent state election in March.

Modi’s administration has revoked Article 370 of the constitution that granted special autonomous status to India’s only Muslim-majority state, Jammu and Kashmir, and approved a citizenship law that discriminates based on religion. In March, a high court in south India ruled that educational institutions can bar Muslim students from wearing headscarves.

The remarks against Prophet Muhammad and Islam were made on two separate occasions during a TV debate and a social media exchange. The BJP suspended one of the party members and expelled another. Both were also party spokespersons and the party said it was “against any ideology which insults or demeans any sect or religion.”

While the episode had damaged India’s reputation, it would now depend on how effective New Delhi is in the coming days and months to reassure Arab partners that it is sensitive to their concerns about Islam, said Harsh V. Pant, a professor at King’s College London.

“In the long term there are enough convergences between the Arab world and India and the global order,” when it comes to energy security, future of work and people linkages, he added. – Bloomberg.

Ministry of Hajj opens online registration for pilgrims from Europe, the US and Australia