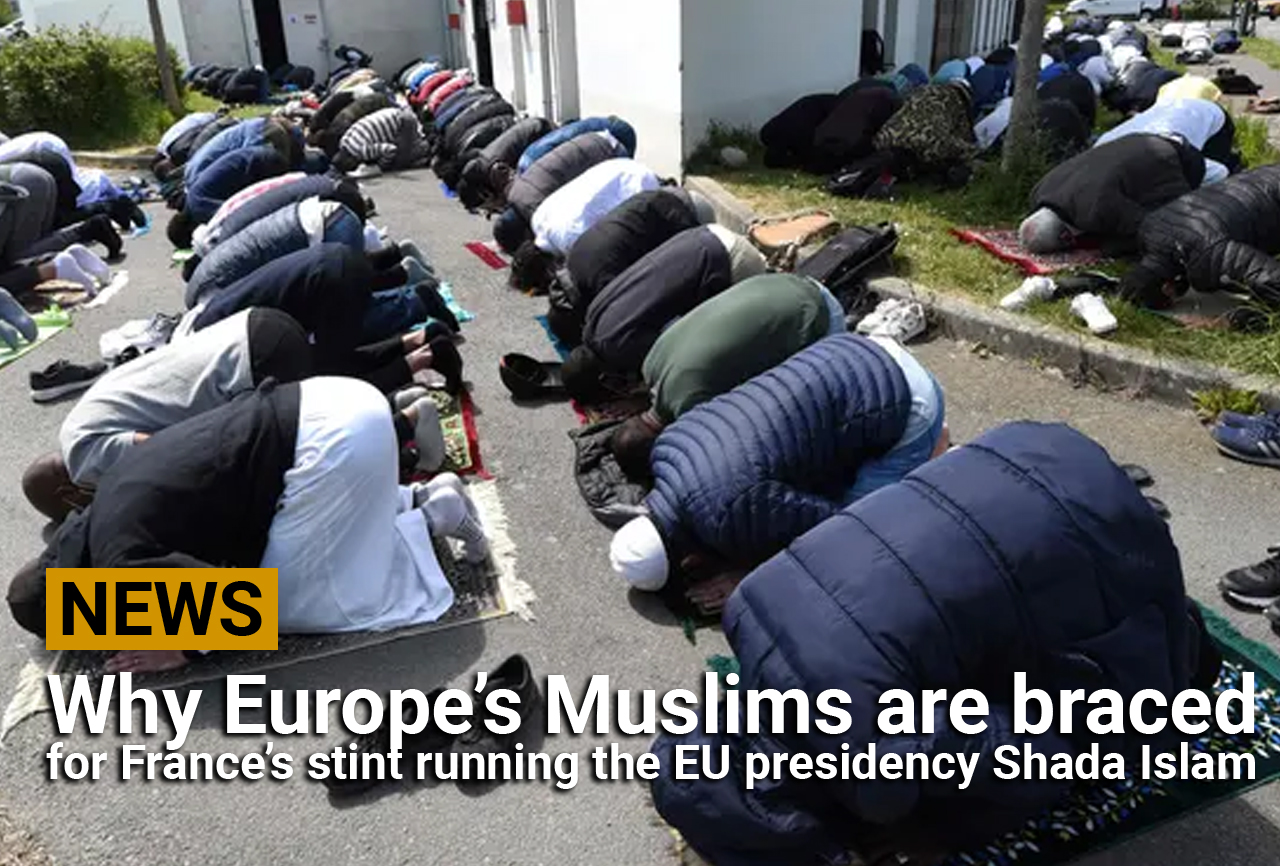 France has taken over the rotating EU presidency for the next six months, an opportunity the president, Emmanuel Macron, will no doubt use to nudge Europe towards his goal of greater “strategic autonomy” in the world. Some in Brussels worry that hotly contested presidential elections in April could interfere with France’s EU presidency before a key conference on the future of Europe delivers any results. It’s not reassuring that Macron’s decision, temporarily, to fly the blue and gold EU flag at the Arc de Triomphe in Paris has already drawn the fury of far-right and conservative election candidates.

But many European Muslims are concerned about the French stint in the EU chair for another reason: they fear that France’s divisive anti-Muslim political discourse will seep dangerously into EU policymaking.

The French election campaign essentially means it is open season on Muslims in France. Many French politicians have adopted rampant Islamophobia as an electoral strategy. Toxic debates on Islam and Muslims, mixed with acrimonious intersectional swipes at race and migration, are becoming increasingly venomous.

Alarmingly, Muslim-bashing is no longer the preserve of the far-right anti-immigration candidate Marine Le Pen. Macron’s hardline interior minister, Gérald Darmanin, accused Le Pen, during a recent television debate, of going “soft” on Islam. The former TV pundit Éric Zemmour has brought an even more vicious anti-Muslim agenda to the presidential contest, while candidate for the Gaullist Les Républicains party, Valérie Pécresse, is taking a hard line on immigration, having previously banned the wearing of burkinis at outdoor leisure centres in the Paris region.

Macron himself, who is expected to seek re-election, is already enforcing a spate of anti-Muslim policies, including a bill supposedly aimed at preventing “separatism” and the emergence of a “counter society” among France’s six million Muslim citizens. Macron’s government is also under criticism for shutting down the Collective Against Islamophobia in France, a leading anti-discrimination body which documents anti-Muslim hate crimes. The European Network Against Racism warns of a full-blown “Islamophobic witch-hunt” of French Muslims and says the government is using “countless administrative procedures” to close down Muslim-led organisations, mosques, schools, and even Muslim-owned snack bars, on unproven claims of links to the Muslim Brotherhood.

But the fear now is that France will use its EU presidency to push for even tougher Europe-wide measures.

It’s a reasonable fear in the context of French ministers calling out Helena Dalli, the European commissioner for equality, for meeting members of Femyso, the Forum of European Muslim Youth and Student Organisations, a network that also participated in a Council of Europe anti-discrimination campaign focusing on hijabs. That campaign caused a political outcry in France as an attack on its “values”. Dalli rightly defended meeting Femyso representatives to discuss challenges facing young European Muslims as “a result of stereotyping, discrimination and outright hatred”. Attacking Dalli for the meeting, Marlène Schiappa, the citizenship minister in the Macron government, said Femyso was an “Islamist association” that was “attacking France” and “infiltrating” EU institutions, allegations which Femyso flatly denies and which its president, Hande Taner described in a statement as “laughable”.

An intervention by the French government with the European Commission meanwhile prompted a delay which led ultimately to the cancellation – ostensibly for administrative reasons – of planned EU funding for another rights group, Alliance Citoyenne, which has defended the right of Muslim women to swim in public pools wearing burkinis.

My own reports and articles on France and Europe written over the years note a persistent unease about Islam as an alien faith, Muslims as undesired foreigners and an irrational fear of the hijab and of halal food. Diatribes conflating Islam, extremism and terrorism are a tediously recurring phenomenon at both formal and informal gatherings.

France’s Muslim-panic has parallels elsewhere. In Austria the former chancellor Sebastian Kurz took aim at the alleged rise of so-called political Islam after the launch of a much-criticised website called “Islam map” which shows the locations of more than 600 mosques. The map, according to rights groups, has led to incidents of violence against Muslims.

Denmark’s former immigration minister, Inger Støjberg , was given a jail sentence recently for illegally ordering the separation of young asylum-seeking married couples from Syria and Iraq, where the woman was under 18. Seeming to implicitly link Islam and refugee policy as is often the case across Europe, Støjberg had said she wanted to protect “child brides”. She previously caused controversy by arguing that Danish Muslims be kept out of work places during Ramadan because daylight fasting could create safety hazards. Støjberg has now been impeached, and may be a political outlier, but it is hard not to see Denmark’s hardline approach to “integration” and refugees, including a June law which enables it to transfer asylum seekers outside the EU while their cases are being processed, as at least partly driven by a fear of Muslims.

The Austrian academic Farid Hafez raises troubling questions too about the motivation behind the Vienna forum on countering segregation and extremism in the context of integration, an annual conference launched by Austria with the support of France and Denmark to fight “political Islam” and so-called “non-violent extremism and Islamism”. If not outright McCarthyism, as Hafez calls it, such initiatives are a dangerous step towards prejudging all Muslims as a potential threat to liberal societies.

Once restricted to the EU’s far-right groups, France’s fixation with Muslims has extended across the European political landscape; Islam is seen either as a threat to national secular traditions or to the idea of “Christian Europe”. Hungary’s Viktor Orbán and his EU allies have long raged against Islam, but dog whistling to anti-Muslim extremists is becoming the standard pattern for many mainstream EU conservatives.

Even without chalking up any major electoral victories (so far), far-right parties have in effect succeeded in mainstreaming their hostile narrative on Muslims and migrants. No wonder hostility and discrimination towards Europe’s Muslims is widespread as the EU’s own Fundamental Rights Agency warns. The 2020 issue of the annual European Islamophobia report, co-edited by Hafez with scholars, experts and civil society activists from more than 30 European countries, concluded that anti-Muslim racism has worsened across the continent.

There are bright spots. In Germany, which welcomed more than a million refugees from Syria and other countries in 2015, the new governing coalition has promised a “modern immigration country”.

EU governments and the European Commission are – quite rightly – struggling against violations of the rule of law, attacks on the judiciary and the erosion of media freedoms in Hungary and Poland. But they have turned a blind eye to policies and actions that reinforce exclusion and prejudice in some western EU member states.

Being a European Muslim has never been a walk in the park. With about one-third of French voters saying they will vote for far-right and ultra-nationalist candidates, France’s Islam-panic is likely to escalate in the coming months.

Despite the EU’s lofty talk of equality, diversity and non-discrimination, European Muslims should be braced for a tough start to the new year.

As 2022 begins, and you’re joining us from India, there’s a new year resolution we’d like you to consider. We’d like to invite you to join more than 1.5 million people in 180 countries who have taken the step to support us financially – keeping us open to all, and fiercely independent.

In 2022, we’ll be no less active, with a cluster of elections (France, Brazil, the US to say the least), economic pinch points, the next phase of the pandemic, the gathering climate emergency and the first ‘winter World Cup’ to keep us busy.

With no shareholders or billionaire owner, we can set our own agenda and provide trustworthy journalism that’s free from commercial and political influence, offering a counterweight to the spread of misinformation. When it’s never mattered more, we can investigate and challenge without fear or favour.

Afghan universities reopen with female students joining in as well