Home NEWS Uyghurs: China may have committed crimes against humanity in Xinjiang – UN 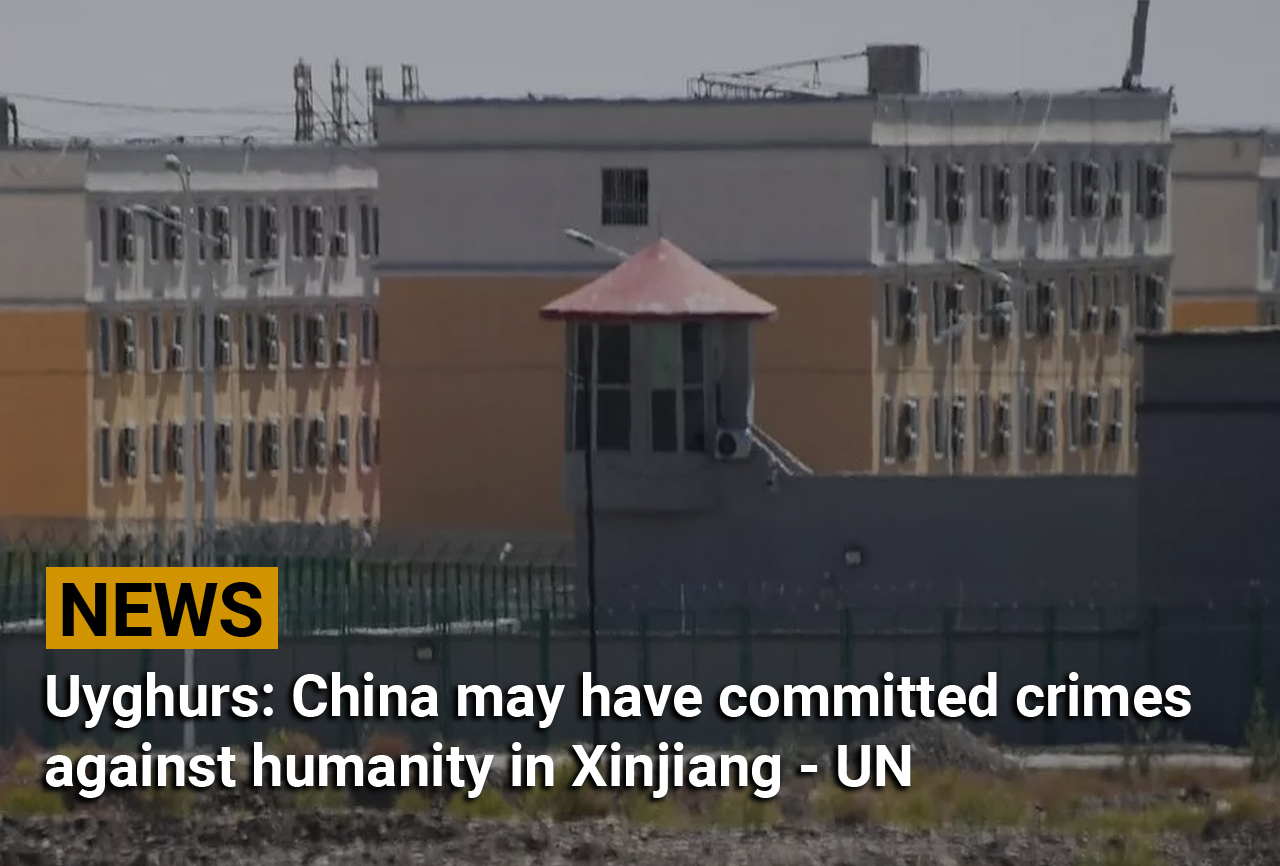 The UN has accused China of “serious human rights violations” in a long-awaited report into allegations of abuse in Xinjiang province.

China had urged the UN not to release the report – with Beijing calling it a “farce” arranged by Western powers.

The report assesses claims of abuse against Uyghur Muslims and other ethnic minorities, which China denies.

But investigators said they found “credible evidence” of torture possibly amounting to “crimes against humanity”.

Human rights groups have been sounding the alarm over what is happening in the north-western province for years, alleging that more than one million Uyghurs had been detained against their will in a large network of what the state calls “re-education camps”.

The BBC’s own reporting in recent years has uncovered documentation – including police files detailing those in detention – which appear to support the claims, as well as allegations of rape, torture and forced sterilisation.

However, the UN’s report concluded that “the extent of arbitrary and discriminatory detention of members of Uyghur and other predominantly Muslim groups … may constitute international crimes, in particular crimes against humanity”.

The report recommended that China immediately takes steps to release “all individuals arbitrarily deprived of their liberty”.

Beijing has already rejected the findings, with Foreign Ministry spokesperson Wang Wenbin telling reporters the “so-called suggestions were pieced together based on disinformation to serve political objectives”.

The World Uyghur Congress welcomed the report and urged a swift international response.

There are about 12 million Uyghurs, mostly Muslim, living in Xinjiang. The UN said non-Muslim members may have also been affected by the issues in the report.

The US and lawmakers in several other countries have previously denounced China’s actions in Xinjiang as a genocide, but the UN stopped short of making the accusation.

Beijing – which saw the report in advance – denies allegations of abuse and argued that the camps are a tool to fight terrorism.

China has always insisted that Uyghur militants are waging a violent campaign for an independent state, but it is accused of exaggerating the threat in order to justify repression of the Uyghurs.

Its delegation to the UN human rights council in Geneva on Thursday rejected the findings of the report, which it said “smeared and slandered China” and interfered in the country’s internal affairs.

The Xinjiang Police Files – the title given to the cache by a consortium of international journalists of which the BBC is part – have formed the basis of a large part of reporting done by the BBC on the Uyghurs in recent years. Here, the BBC’s former China correspondent John Sudworth reveals some of what the cache of documents have been able to tell us.

In the most significant document in this part of the dataset, officers are ordered to be prepared to use the weapons in the event of an escape.

When the alarm is triggered, the papers say, the perimeter roads must be sealed off, the buildings locked down and the camp’s own armed police “strike group” sent in.

After a warning shot is fired, if the “student” continues to try to escape, the order is clear: shoot them dead.

China insists that the camps provide grateful and willing Uyghurs and other Turkic minorities with lessons that steer them away from the dangers of terrorism and extremism.

In some regards, they bear a passing resemblance to schools, with the rote learning of Chinese and the reciting of propaganda slogans.

But the cache goes further than ever before in showing the harsh, involuntary nature of these facilities designed to target almost any aspect of Uyghur identity, and replace it with an enforced loyalty to the Communist Party.

The report has long been the subject of intense international attention, with UN Human Rights Commissioner Michelle Bachelet admitting last week she had been under “tremendous pressure to publish or not to publish”.

Some Western human rights groups alleged Beijing was urging her to bury damaging findings in the report, especially after publication was delayed several times.

Ms Bachelet defended the delay, arguing that seeking dialogue with Beijing over the report did not mean she was “turning a blind eye” to its contents. But Amnesty International called it “inexcusable”.

In the end, the report was made public just 13 minutes before the end of her four-year tenure.

And while it has been welcomed by many, some have expressed disappointment – including the World Uyghur Conference. Spokesman Zumretay Arkin said they had “expected her to be firmer on China overall”.

Olaf Wientzek, director of the Geneva office of the German Konrad Adenauer Foundation, went on to accuse Ms Bachelet of having “avoided the aftermath” of the report’s publication.

Ms Bachelet, meanwhile, has blamed the “politicisation” of the issue by some countries, saying it made “engagement more difficult and… trust-building and the ability to really have an impact on the ground more difficult”.

Now attention will turn to what will happen next.

Uyghur rights activists are calling for a commission of inquiry to be set up, and asking businesses around the world to cut all ties with anyone abetting the Chinese government in its handling of the Uyghurs.

Tom Tugendhat, an MP and chair of the UK’s foreign affairs select committee, said the findings of the report represented an “extremely serious charge” and rejected Beijing’s argument that the allegations were stoking anti-Chinese sentiment. Germany has called for the release of all arbitrarily detained Uyghurs.

However, there is unlikely to be much pressure from inside China: the issue of Uyghur human rights abuses has long been a taboo topic and heavily censored – as of Thursday afternoon, the UN report had yet to be mentioned in Chinese mainstream media or social media platforms.

China’s ambassador: “There is no such concentration camp in Xinjiang”