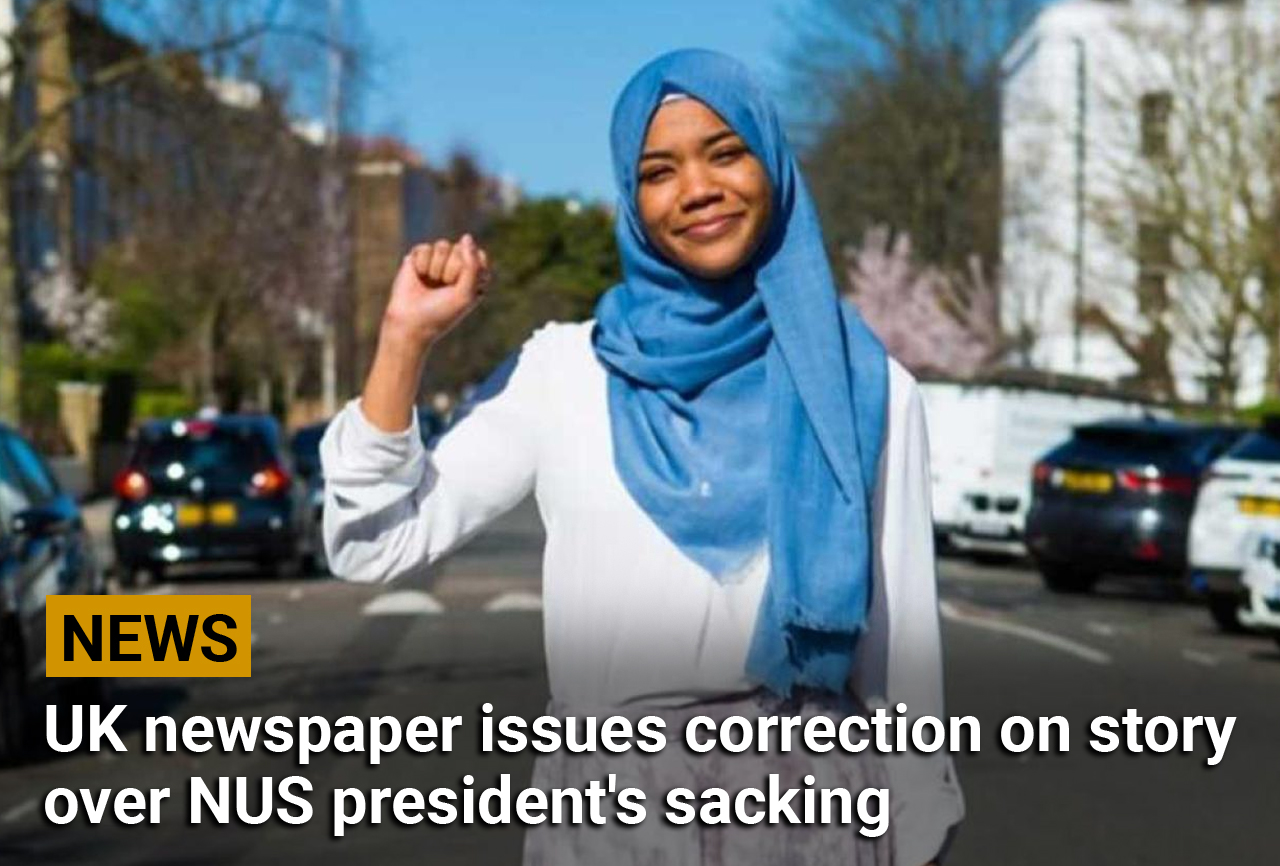 The British newspaper Jewish Chronicle recently issued a correction to an article from November 2022, in which it originally reported that Shaima Dallali, the former president of UK’s National Union of Students (NUS), was formally notified of her dismissal prior to it being reported publicly.

The Jewish Chronicle had cited a source at the NUS, who said that Dallali was given notice of her dismissal prior to it being made public. In a tweet on Friday, Dallali showed that the newspaper issued a correction this month stating it was “clarifying the circumstances” in which she learned of her dismissal.

“That the NUS leaked details regarding my employment status was simply appalling. To then provide false quotes to the very same media outlets they leaked it to in an attempt to smear me as a liar makes their behaviour even more shameful,” Dallali said on Twitter.

Dallali, a Black Muslim woman of Tunisian descent, was elected in March 2022 to lead the national student body.

After her election, Dallali was placed under investigation following complaints of antisemitism and homophobia relating to a number of tweets dating back to 2012.

Dallali apologised for the tweets and welcomed the investigation into her actions.

In September, the Federation of Student Islamic Societies (FOSIS) said it was dismayed at Dallali’s treatment and it would encourage its members to launch disaffiliation campaigns against the NUS.

In November, she was dismissed, making her the first president to be dismissed in the NUS’s 100-year history.

And then later in November, following the FOSIS call, the Queen Mary University of London’s student union voted to disaffiliate from the NUS – the motion was approved by the university’s board of trustees in December. The student body also passed a motion in support of the Palestinian-led Boycott, Divestment, and Sanctions (BDS) movement.

Earlier this month, a long-awaited investigation said that the NUS has created an “unwelcome” and hostile environment for Jewish students.

The report said that complaints of antisemitism had been viewed as politically motivated and made in “bad faith to try and avert pro-Palestinian or anti-Israel policy advocacy”.

“This has resulted in antisemitism as well as hostility towards Jews, which has not been challenged sufficiently or robustly or proactively by NUS,” it said.

However, the Palestine Solidarity Campaign, the UK’s largest pro-Palestine group, raised concerns about the report over the “disproportionate involvement of the Union of Jewish Students (UJS), who were given significant authority in the framing of the investigation and the appointment of the Independent Investigator”.

“The report’s main focus is antisemitism in the context of discourse about Palestinian rights. It calls for such discourse to be nuanced,” a spokesperson from PSC previously said in a statement.

Following Dallali’s dismissal, the PSC also raised concerns that the case represented “a failure from the outset to distinguish between genuine antisemitism and legitimate advocacy for the rights of Palestinians”.