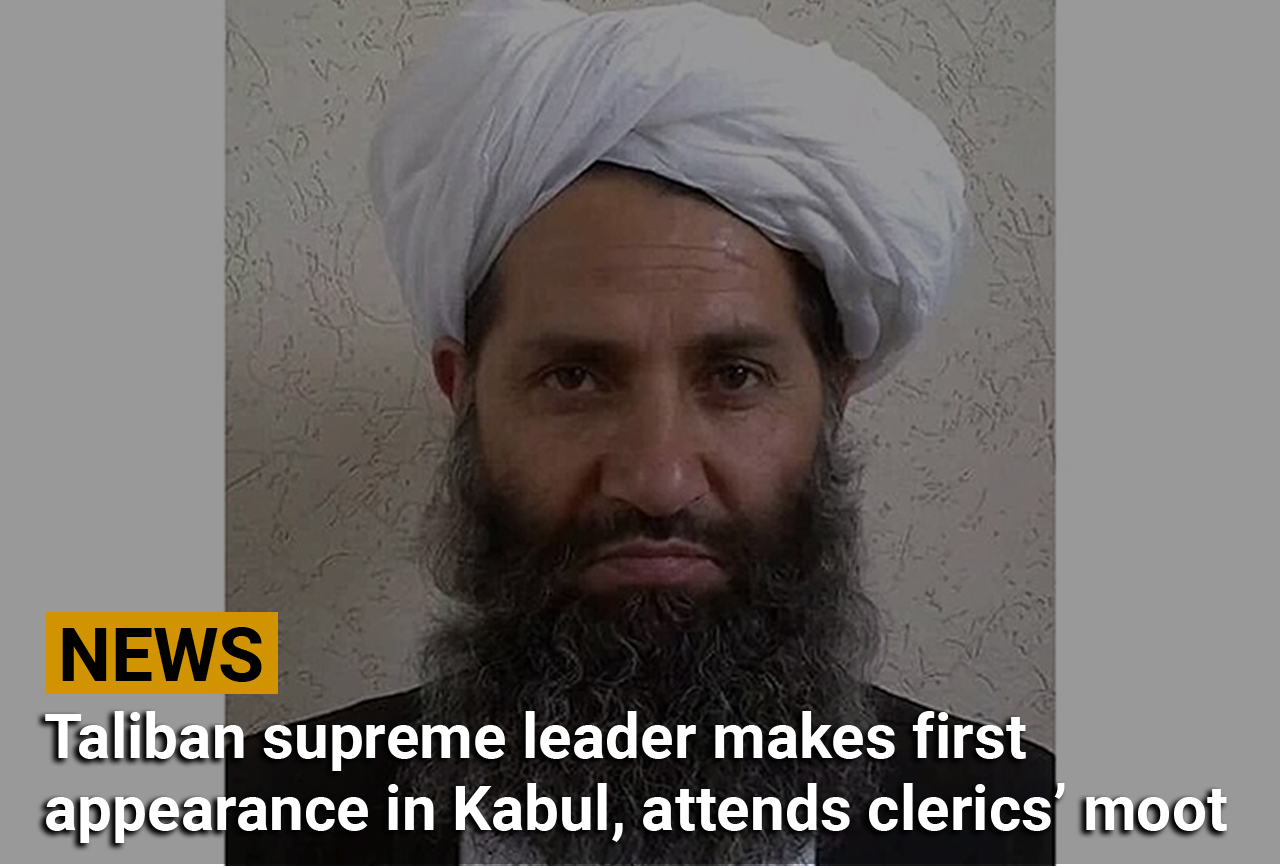 The supreme leader of the Afghan Taliban, Sheikh Hibatullah Akhundzada, on Friday arrived in the capital, Kabul, for the first time since the group took control of Afghanistan in August last year.

Akhundzada, who has not been filmed or photographed in public since the Taliban’s return, spoke at a grand meeting of religious scholars and tribal elders on the second day that is discussing important issues.

Organisers said that over 3,000 scholars and influential personalities from across Afghanistan were taking part in the moot which would continue till Saturday (July 2).

During his speech, which was delivered in Pashto, the Taliban supreme leader defended his government’s policies and said that the Taliban had the right to fully implement the Islamic system.

Akhundzada said it had never been the objective of the Taliban to target Afghans during its resistance against foreign invaders. But those Afghans who were guarding foreign occupation, he continued, “we had no option but to fight them”.

“When the Americans left Afghanistan, we declared a general amnesty for all and told them that they were pardoned despite their brutalities against the Mujahideen,” the Taliban chief said.

He urged officials to end corruption in all government departments and avoid giving positions on the basis of favouritism and friendship.

“If such ills are part of our government, then it will be totally against the struggle we waged for the establishment of an Islamic system,” Akhundzada said.

He further went on to defend the policies of the Islamic Emirate and said the government was facing challenges from the international community.

“There would be more opposition to our government when we start implementing decisions of Islamic courts,” he said, adding that “we should not care about the world’s criticism but try to enforce the Islamic system.”

Earlier, speakers at the gathering vowed to defend their country despite external and internal challenges.

Afghan Prime Minister Mullah Hasan, in his address, urged the delegates to question those who were against the Islamic administration.

“Now, the Islamic system has been established, we must do all we can to strengthen it,” the state’s Bakhtar News Agency quoted the premier as saying.

“You are well aware that under the rule of the Islamic system, all those who used to fight the Mujahideen have been pardoned, but they still create troubles for our country from abroad,” he said.

Meanwhile, Afghan Defence Minister Mullah Yaqoob sought a religious decree from the participants for the solution to some problems. He asked the scholars to identify weaknesses in the implementation of the Islamic Sharia and urged them to suggest solutions.

“Neither any Islamic nor any non-Islamic country has recognised our system. Give us advice on how to formulate a foreign policy that could lead to the recognition of the government,” Yaqoob added.

Taliban officials said the armed men wanted to fire at the participants of the conference. They also issued a video showing three bodies lying in different parts of a house.

The Taliban government’s spokesman Zabihullah Mujahid played down the incident when asked at a press conference in Kabul calling it “small”.

He said that the incident did not disrupt the meeting. When the security forces fired at the suspects, they lobbed a hand grenade at the raiding party, but no one was injured, he said.

Separately, a diplomatic source said that two to three rockets were fired towards the venue of the grand meeting, out of which one landed near the Polytechnical school where guests were residing. An exchange of fire was also reported near the site.

Later, several videos in which heavy firing could be heard were posted on social media.

Meanwhile, local and foreign journalists were not allowed access to the “Loya Jirga” tent where the meeting was being held. Only the Afghan state TV, radio, and social media aired audio of the speeches. Pictures or videos of the conference were, however, not released to the media.

Since returning to power in August, the Taliban have increasingly curtailed freedoms — particularly those of women and girls.

The United Nations and several countries, including the United States, have criticized those policies and urged the Taliban rulers to “swiftly reverse the policies and practices which are currently restricting the human rights and fundamental freedoms of Afghan women and girls”.

In May, Akhundzada had ordered the country’s women to wear the all-covering burqa in public. “They should wear a chadori (head-to-toe burqa) as it is traditional and respectful,” he had said.

The Taliban have also announced a number of other restrictions, including asking Afghanistan’s television channels to stop showing dramas and soap operas featuring women actors.

Last year, Taliban authorities said that women seeking to travel anything other than short distances should not be offered transport unless they are accompanied by a close male relative.

The guidance, issued by the Ministry for the Promotion of Virtue and Prevention of Vice, also called on all vehicle owners to offer rides only to those women wearing hijabs.

The Afghan government has also shut down girls’ secondary schools in the country.

The international community has made the right to education for all a sticking point in negotiations over aid and recognition of the Taliban regime, with several nations and organisations offering to pay teachers.

In the same vein, UN rights chief Michelle Bachelet on Friday urged the Taliban to look to other Muslim countries for inspiration on improving the rights of women, and ending their “systematic oppression”.

According to an AFP report, she said, “I strongly encourage the de facto authorities to engage with predominantly Muslim countries with experience in promoting women and girls’ rights, as guaranteed in international law, in that religious context.”