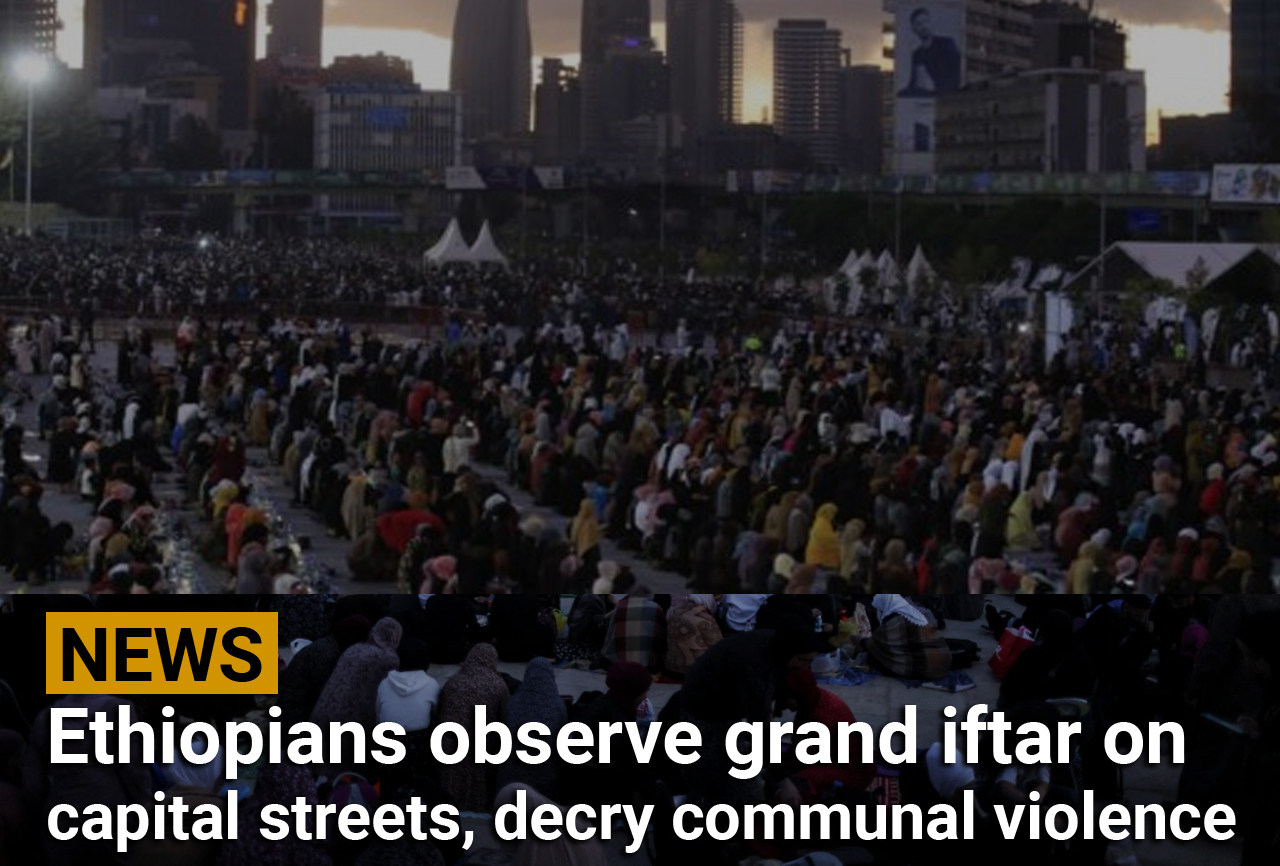 ADDIS ABABA, Ethiopia: Over half a million people broke fast on the streets in the Ethiopian capital of Addis Ababa on Friday in solidarity with the Muslim community, which is observing fast during the holy month of Ramadan.

On the somber occasion, people chanted slogans and condemned the heinous attack, in which miscreants torched several mosques in the northern province of Gonder three days ago.

In retaliation, a group of extremists in the Muslim-dominated southern province of Silte, burnt two churches, according to witnesses.

So far, no causalities were reported from the region.

The breaking of the fast, or iftar, was attended by several Muslim leaders, government officials, and guests from other countries.

In his address, Deputy Mayor of Addis Ababa Zhantrar Abbay said: “There are forces bent on pitting the faithful of one religion against another. We don’t have shoulders to carry such destructive forces.”

Ustaz Abubeker Ahmed, a leader of the Islamic movement Dimtsachn Ysema, complained that Ethiopian Muslims are not given the place they deserve in the country. The movement shook the government between 2011 and 2018.

Speaking to Anadolu Agency, Abubeker said the iftar was aimed at embarking on a long journey of earning the respect, place, and acceptance Muslims deserve in the Ethiopian mainstream.

“Even the current horrific attack is an explicit example that shows how extremists see Muslims in the country. We have lots of work to do,” he said while referring to the April 27 attack.

Adugnaw Muche, one of the organizers, told Anadolu Agency that the event attracted a lot of people mainly in reaction to the unfortunate communal incidents.

“Half a million people peacefully gathered and used the iftar to underscore solidarity against Islamophobic attacks in the country,” he added.

He said the sunset meal was one of a series of events launched to introduce Muslims and their history to the world.

Prime Minister Abiy Ahmed has called on the Ethiopian diaspora, and other friendly nations who love the country to join Ethiopian Muslims in different events marked over three months between Eid al-Fitr (festivity marking the end of Ramadan) and Eid al-Adha (marking pilgrimage to Makkah, Hajj, Eid of sacrifice), known as Eid-to-Eid program.

“It is an initiative by the Ethiopian Prime Minister especially targeting Muslim diaspora,” Adugnaw said.

Ethiopian envoy to Ankara Adem Mohammed urged Turkish people and organizations to visit his country to know more about Ethiopian Muslims and their historical and cultural value in the East African nation, as well as the Horn of Africa.

He told Anadolu Agency that Ethiopia, as the country of historic migration of Prophet Muhammad’s companions to his country some 1,400 years ago from Makkah, can be a great chance for those who want to explore tourism, and investment opportunities.

According to an official announcement, cultural visits, symposiums, conferences, and festivals are planned to welcome the diaspora community.

During the iftar, attendees waved flags of the Ethiopian tricolor, as well as the flags of Turkey and Palestine.

The event was broadcast live on numerous channels, including the state-owned Ethiopian Television.

Last year, Ethiopian Muslims rolled 30,000 meters of plastic sheet to host 100,000 people to break the fast on the streets of the capital.