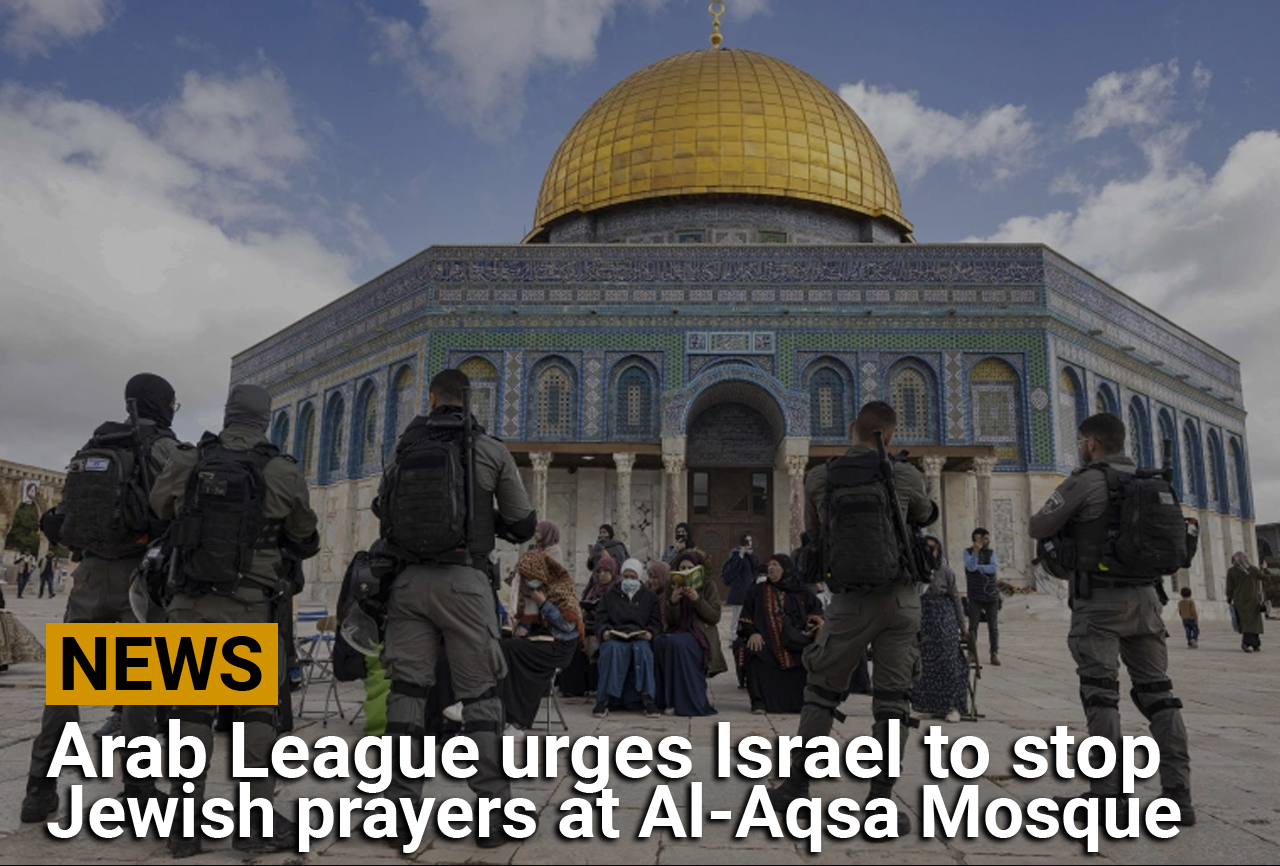 Arab League: ‘Al-Aqsa and Haram al Sharif in all its area is a sole place of worship for Muslims.’

The Arab League has called on Israel to end Jewish prayers inside the Al-Aqsa Mosque compound in occupied East Jerusalem and warned that such actions were a flagrant affront to Muslim feelings and could trigger wider conflict.

The league broke its silence on Thursday on recent violent events at Al-Aqsa, saying Israel had restricted Muslims in their right of worship in Jerusalem’s Old City, while also allowing ultra-nationalist Jews to enter the sacred site under police protection.

“Our demands are clear that Al-Aqsa and Haram al Sharif in all its area is a sole place of worship for Muslims,” Jordanian Foreign Minister Ayman Safadi told reporters after an emergency meeting of the league in Amman.

The meeting was called to discuss what the league termed “illegal Israeli policies and measures” in Jerusalem.

Arab League chief Ahmed Aboul Gheit said Israel was violating a centuries-old policy according to which non-Muslims may visit the Al-Aqsa compound, but they must not pray there.

Israeli riot police stormed the Al-Aqsa mosque compound last week during which at least 158 Palestinians were wounded and hundreds were detained.

Safadi, who spoke with United States Secretary of State Antony Blinken this week, met senior US Department of State officials touring the region on Wednesday to discuss reducing tensions at the sacred site.

The foreign minister said he had received assurances that Israel would halt Jewish worshippers from entering Al-Aqsa.

Sitting atop the walled Old City plateau, the Al-Aqsa compound is Islam’s third holiest site and is known to Muslims as al-Haram al-Sharif (Noble Sanctuary). To Jews it is known as the Temple Mount, the holiest site in Judaism where they believe two ancient temples were located.

Jordan’s Petra news agency said that Arab League warned that Israel’s actions at Al-Aqsa “threatens to ignite a cycle of violence”, and the “attacks and violations represent a blatant provocation to the feelings of Muslims”.

The meeting included member countries that recently normalised ties with Israel, including the United Arab Emirates and Morocco, as well as Tunisia, Algeria, Saudi Arabia, Qatar, Egypt and representatives of the Palestinian Authority.

The surge of violence in Israel and the occupied Palestinian territory over the past month – and during the height of the Muslim fasting month of Ramadan – has raised fears of a slide back to a wider conflict similar to last May’s 11-day Israeli assault on Gaza, in which more than 250 Palestinians in Gaza and 13 people in Israel were killed.

Far-right lawmaker Itamar Ben Gvir, a controversial opposition politician, led the protest after being barred from the Damascus Gate area earlier in the day by Israeli Prime Minister Naftali Bennett.

Ramadan 2022: Importance of justice in Islam