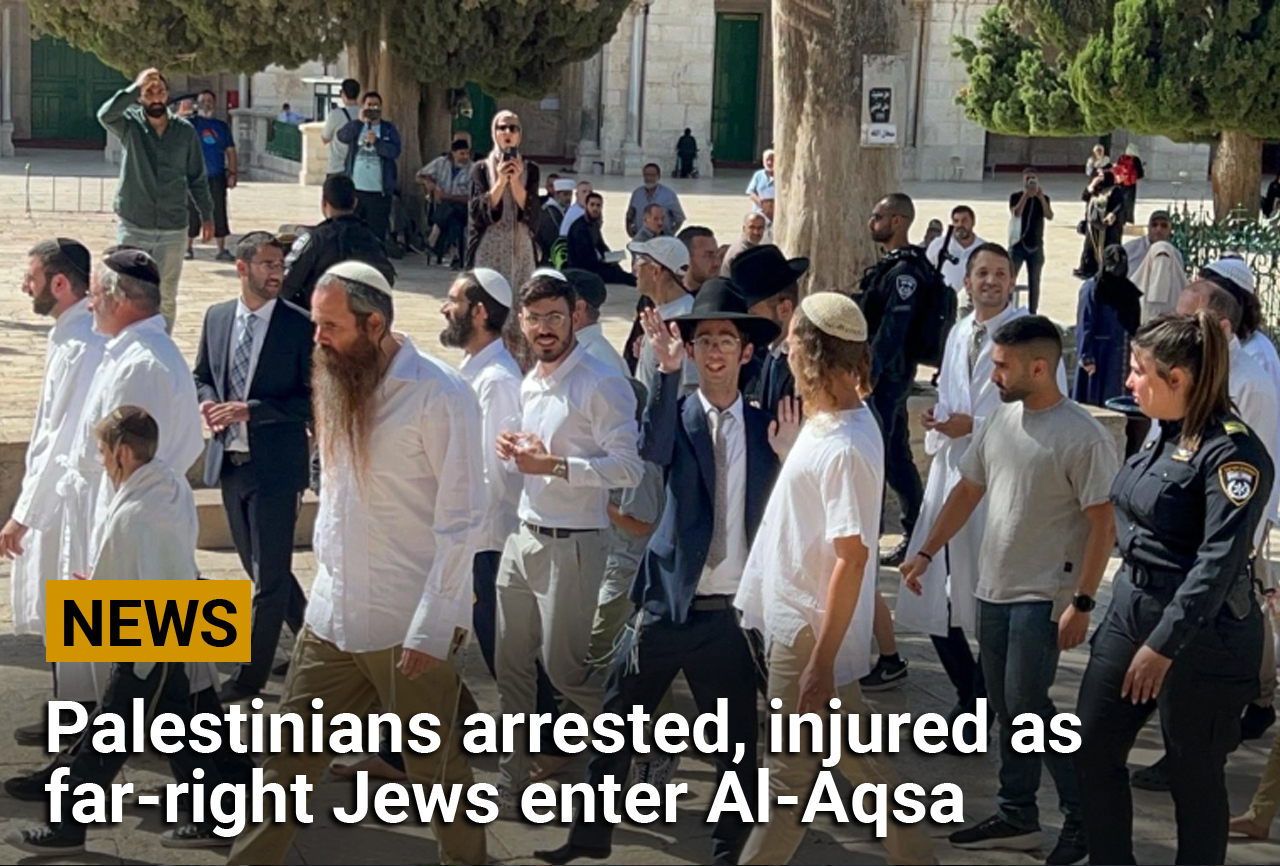 Hundreds of ultranationalist Jews have entered the Al-Aqsa Mosque compound in occupied East Jerusalem – under the protection of Israeli authorities – for the second day in a row, as Israeli police attacked Palestinians gathered in the compound and prevented others from entering.

Palestinian journalists reported on Monday that at least 264 ultranationalist Israelis had entered the compound – one of the holiest sites in Islam and a Palestinian national symbol – in Jerusalem’s Old City, which Israel occupied and illegally annexed in 1967. On Sunday, more than 400 had entered.

The number of ultranationalist Jews – supporters of Israel’s settler movement – entering the Al-Aqsa Mosque compound increased on Sunday and Monday in light of Rosh Hashanah, or the Jewish New Year, which is from September 25 to 27 this year.

Some of those who entered prayed at the site, despite a general consensus among Orthodox Jews that Jewish prayer is not allowed in the Al-Aqsa Mosque compound.

Jewish prayer at the site, which is also known as the Temple Mount to Jews, is seen as provocative by Palestinians, and a reversal of a decades-long consensus to not allow the practice.

That has led to increasing tension with Palestinians, who fear attempts by far-right Jews to take over the site. Some far-right Jews have openly expressed a desire to demolish Muslim structures in the Al-Aqsa compound to make way for what is referred to as the Third Temple.

Palestinians had gathered in the compound in an attempt to defend the site.

An elderly Palestinian man, Abubakr al-Shimi, was hospitalised after suffering head injuries when he was pushed to the ground by Israeli police in an incident that was filmed.

Al Jazeera’s John Hendren, reporting from occupied East Jerusalem, said that the violence happened “on a regular basis” and that it was “seemingly unnecessary”.

Members of the press were also attacked, with the head of the Turkish Anadolu Agency office in Jerusalem, Anas Janli, pushed to the ground in an altercation with police.

Israeli forces began restricting Palestinian entry into the compound after dawn Muslim prayers at 6am (03:00 GMT). Entry of ultranationalist Jews began about an hour later and continued on into the afternoon, until about 2pm (11:00 GMT).

Palestinians under the age of 40 were banned from entering the mosque, while dozens gathered at the Chain Gate (Bab al-Silsila) and the Lion’s Gate (Bab al-Asbat), prayed, and protested.

The Palestinian Authority (PA) condemned what it called the “storming” of the mosque compound.

The spokesman for the PA presidency, Nabil Abu Rudeineh, said “the storming of the Al-Aqsa Mosque by the occupation and its settlers comes within the framework of the Israeli escalation against our people, their land and their holy sites,” and warned that the “continuation of these practices will lead to an explosion of the situation and more tension and violence.”

Abu Rudeineh held the Israeli government “fully responsible for this dangerous escalation and its repercussions”.

Al Jazeera’s Walid al-Omari reported that the city’s famous Al-Ibrahimi Mosque, which has been divided between Palestinians and Jewish settlers, had been fully closed off to Palestinians during Rosh Hashanah, the fourth such closure of the mosque this year.

The mosque is known to Jews as the “Tomb of the Patriarchs”.

Last year, escalating tensions around the expulsion of Palestinian families from their homes in Jerusalem were the catalyst for widespread Palestinian protests across Israel and the occupied Palestinian territory.

Raids of the Al-Aqsa Mosque by Israeli security forces during the holy month of Ramadan heightened tensions further, and four days later, an 11-day Israeli assault on Gaza began.

Al Jazeera’s Hendren said it is expected there will be armed escorts of ultranationalist Jews will increase in the coming days, as “these are the high holy days in the Jewish calendar”.

“Next week there is Yom Kippur, the holiest day in the Jewish calendar – the day of atonement, so we can expect more visits to the [Al-Aqsa] mosque,” Hendren said.