Home NEWS What time is the Queen’s state funeral? Will shops and schools close? And other questions 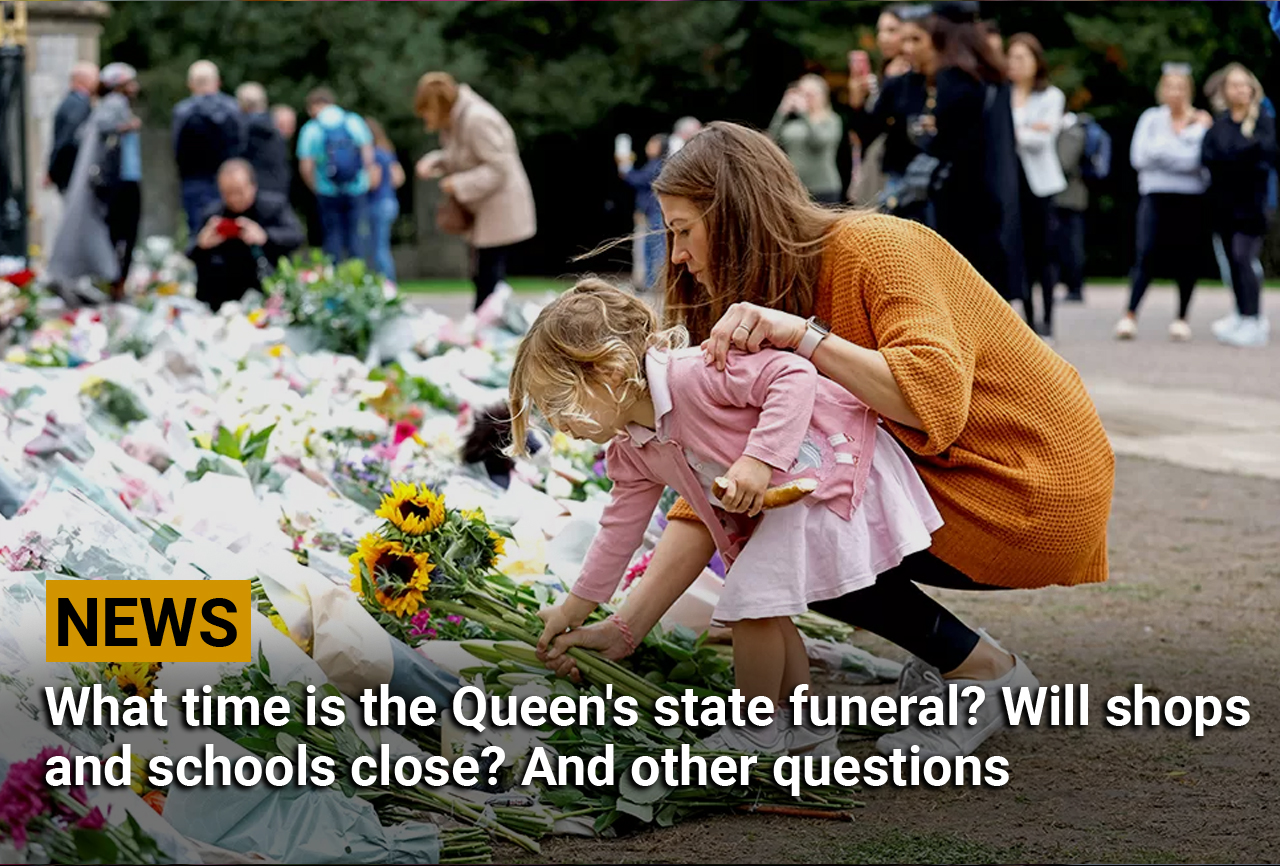 A period of national mourning for Queen Elizabeth II is under way in the UK. It will continue until the end of the day of her state funeral.

Before then, her coffin will be on display in Edinburgh, and then in London for the public to pay their respects.

When is the Queen’s funeral?

The funeral will be held at Westminster Abbey – the historic church where Britain’s kings and queens are crowned.

How can I watch the funeral?

It will be broadcast on BBC television and be available to stream on BBC iPlayer, with updates on the BBC news website and BBC radio throughout the day.

Other networks are also expected to broadcast the event, and it will be shown on big screens in many towns and cities across the UK.

What is a state funeral?

A state funeral is typically held for a king or queen and follows strict rules of protocol. There is usually a military procession carrying the coffin to Westminster Hall, a period of lying-in-state, and a service at Westminster Abbey or St Paul’s Cathedral.

In rare cases, a state funeral can also be held for “other exceptionally distinguished persons”. These have included Sir Isaac Newton, Lord Nelson, the Duke of Wellington and Lord Palmerston.

The last state funeral was that of Sir Winston Churchill on 30 January 1965. The state funeral of George VI, the Queen’s father, took place on 15 February 1952.

Ceremonial funerals share many of the elements of state funerals.

These were held for Diana, Princess of Wales, in 1997 and the Queen Mother in 2002. Baroness Thatcher had a ceremonial funeral with full military honours at St Paul’s Cathedral in 2013.

Who will attend the funeral?

Leaders and royals from around the world will join members of the UK Royal Family.

No guest list has been published yet, but US President Joe Biden, Canadian Prime Minister Justin Trudeau and New Zealand’s Jacinda Ardern are among those to have confirmed their attendance so far.

What does lying-in-state mean?

Lying-in-state describes the formal occasion in which a coffin is placed on view before the funeral ceremony. It happens after the death of a King, Queen or Queen Consort, and sometimes former prime ministers.

The lying-in-state begins at 17:00 BST on Wednesday at Westminster Hall in London. It will last until 06:30 BST on Monday.

It is expected that hundreds of thousands of mourners will be able to file past. Those wishing to attend should expect to queue for many hours – with little opportunity to sit down, as the queue will be continuously moving.

What is a vigil?

Watching over a coffin is sometimes called a vigil.

A vigil was also mounted at St Giles by the Royal Company of Archers – “the sovereign’s body guard in Scotland”.

During the Queen’s lying-in-state in Westminster Hall, each corner of the platform on which her coffin rests will be guarded around the clock by a vigil of soldiers. These will be drawn from units from the Sovereign’s Bodyguard, the Household Division and the Yeoman Warders of the Tower of London.

Where will the Queen be buried?

The final journey of the Queen’s coffin will be to St George’s Chapel, at Windsor Castle.

There will be a committal service with a small congregation including the Royal Family, which will also be televised. This will end with the coffin being lowered into the Royal Vault.

Later in the day, in a private service, the coffin will be interred at the King George VI memorial chapel, inside St George’s Chapel.

Will there be a bank holiday?

Yes. One of King Charles III’s first acts as monarch was to approve a national bank holiday, on the day of the Queen’s state funeral.

The government says it will “give as many people as possible the opportunity on the day of the State Funeral to mark Her Majesty’s passing”.

Will schools, shops and businesses be closed?

Schools are not expected to be open on the day of the funeral.

GP surgeries have also been given permission to close. There have been reports of some hospitals in England and other parts of the UK cancelling routine treatments due to take place on the day of the funeral too.

However NHS bosses have been told to make sure patients can access emergency out-of-hours care on the day.

Most businesses and many shops will close as well, as is the case with other bank holidays.

However, the right to a bank holiday day off is not automatic. The government says it encourages “employers to respond sensitively to requests from workers who wish to take time off”.

Will events be cancelled?

There is no obligation to cancel or postpone events during the period of national mourning.

However, government guidance says if sporting fixture or events are planned for the day of the funeral, organisations may want to adjust the timings.

Three Premier League games have been postponed this weekend ahead of the funeral, but other football matches are resuming after a pause last weekend.

When is the coronation?

No date has been set so far for the coronation, which is when King Charles is formally crowned.

The ceremony is unlikely to take place immediately, because of the planning required. Queen Elizabeth succeeded to the throne in February 1952, but was not crowned until June 1953.

A decision about whether the day of the coronation will be a bank holiday will be made nearer the time.

The Royal Mint won’t say how or when it will start issuing coins with King Charles III’s head on them.

Bank notes with the Queen on will also be gradually phased out, but all notes and coins will remain legal tender.

The Bank of England will give lots of notice if that is to change.