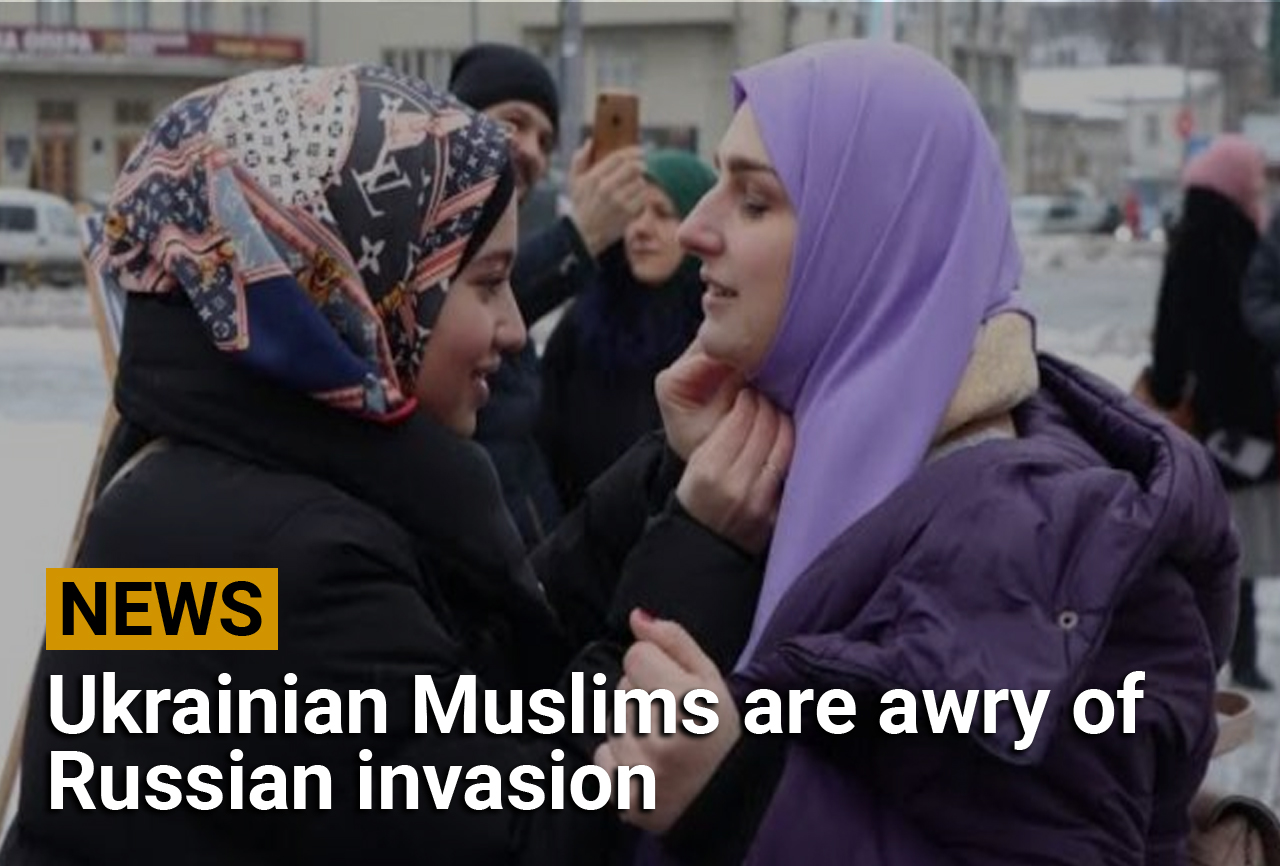 The Russian invasion of Ukraine on Feb 24, 2022, has brought uncertainties to about 400,000 Muslims, the majority being Crimean Tatar. According to an estimate 100,000 Muslims are living in the capital Kyiv alone, others in cities like Kherson, etc. The other ethnic Muslim groups in Ukraine besides Crimean Tatar are Volga Tatars, Azeris, North Caucasians,s and Uzbeks.  After the Russian invasion, the future of the Ukrainian Muslims hangs in balance and largely depends on the ongoing diplomatic efforts by world leaders to defuse the escalating tensions.

The Union of Islamic Communities of Italy has urged Muslim communities in the country and across Europe to open the doors of their centers so they can be safe havens for those fleeing from war in Ukraine. Muslim communities throughout Italy have been organizing local initiatives to collect food and medicine to be donated to Ukraine, in cooperation with the Catholic organizations.

In this regard, there is little effort made by the Muslim countries. In fact, their reaction to the current Ukraine war is hopeless. While the Turkish President Erdogan has criticized the Russian invasion, Iran has accused the U.S. and the West of causing the ‘problem’ in Ukraine. The other Muslim countries are silent about the Russian invasion of Ukraine and they have no words of support for the fleeing Ukrainian Muslims.

To recall in March 2014, Russia annexed Crimea after a disputed and internationally rejected referendum. The occupying forces immediately began to crack down on the Crimean Muslims. The war displaced some 750,000 Muslims from the Crimea peninsula and they moved to the capital Kyiv and Kherson, a city in southern Ukraine.

Now with the Russian invasion of Ukraine, the nightmare of persecution once again looms large on the mind of the Muslims and they are awry about their future. The renewed threat of their displacement by the Russians holds their future into uncertainty and they fear to be treated in the same way as they were in 2014, the Crimea war.

The history of Ukraine Muslims is associated with the Crimean Tatars, the Turkic-speaking descendants of Turkic and non-Turkic peoples who had settled in Eastern Europe as early as the 7th century.

The Crimean Tatars are a Muslim ethnic indigenous group to the Crimean Peninsula, on the northern coast of the Black Sea. Muslim settlements are concentrated in the countries in the southern half, particularly in Crimea, although there are Lipka Tatar’s colonies in other regions such as Volhynia and Podolia.

Muslims established the Crimean Khanate in southern Ukraine in the 15th century. The Khanate soon lost its sovereignty and fell to the Ottoman Empire, although its local rulers retained a significant degree of autonomy. The Khanate ended after growing Russian influence leading to its annexation into the Russian Empire after the Russo-Turkish Wars in the late 18th century.

At the time when the Khanate was annexed by Russia, its capital of Bakhchysarai had at least 18 mosques along with several madrassas.  Later at the time of the Russian Revolution in 1917, Muslims constituted one-third of Crimea’s population. Nearly all major cities in Crimea had a significant Muslim population.

However, the Russian Empire began persecuting the Muslims. Crimean Muslims were subjected to mass deportation in 1944 by Joseph Stalin who accused them of collaborating with Nazi Germany. This stigma was propagated about the Muslims despite tens of thousands of Crimean Tatars serving the Red Army.

In 1944 more than 200,000 Crimean Muslims were deported to Central Asia, primarily to Uzbekistan. They were forced onto the cattle trains and exiled. It is estimated that about half of them died due to the harsh journey, starvation, and subsequent diseases.

After the collapse of the Soviet Union in 1991, the Crimean peninsula became part of Ukraine, and the exiled Muslims were asked to return to their homeland. The repatriation though began in 1989, accelerated after 1991. The returnees faced challenges such as being blocked from buying or renting homes, including those that they had previously owned before the deportation.

Estimates of the Ukrainian Muslim population vary. According to a 2011 Pew Forum study estimate, the Ukrainian Muslim population is about 393,000, but the Clerical Board of Ukraine’s Muslims claim that there are two million Muslims living in Ukraine. According to another report of 2012 an estimated 500,000 Muslims live in Ukraine, among them are 300,000 are Crimean Tatars.

The condition of the Muslims in Ukraine has been improving since 1991 that’s Ukraine’s independence. During the Soviet era, Ukrainian Muslims were not allowed to practice their religion in open but after 1991, Muslims were allowed to pray in their mosques.

There are other notable developments taking place with regard to Ukrainian Muslims since 1991. A Crimean Tatar representative body was formed to be called Mejlis in 1991. In addition, Crimean Tatar language schools were introduced to reverse the effects of the Soviet ban on the study of the language.

Now Muslims in Ukraine have 445 communities, 433 ministers, and 160 mosques, more mosques being built there slowly and steadily. There are nearly 360 registered Ukrainian Muslim communities and organizations and there are several charitable organizations of the Muslims there.

Muslims in Ukraine lead an Islamic way of life. Weddings are conducted as per Islamic rituals, halal food is served, and Islamic education for children and adults and other facilities are provided. Ramadan programs are organized in a big way. During the month of Ramadan, there are about 800-1,000 people daily visiting the Central Mosque in Kyiv for iftar and Tarawih prayers.

The assumption is Russia may not persecute the Muslims of Ukraine as it has done before because there is no reason for doing so. It is believed that Vladimir Putin has built a brand image for himself in the Muslim world that he is the only leader that can stand up to Western anti-Muslim biases.  In the war against Ukraine, he must deploy this Russian capital in the most effective way and spare the Muslims from any harm to gain the support of Muslims from all over the world.