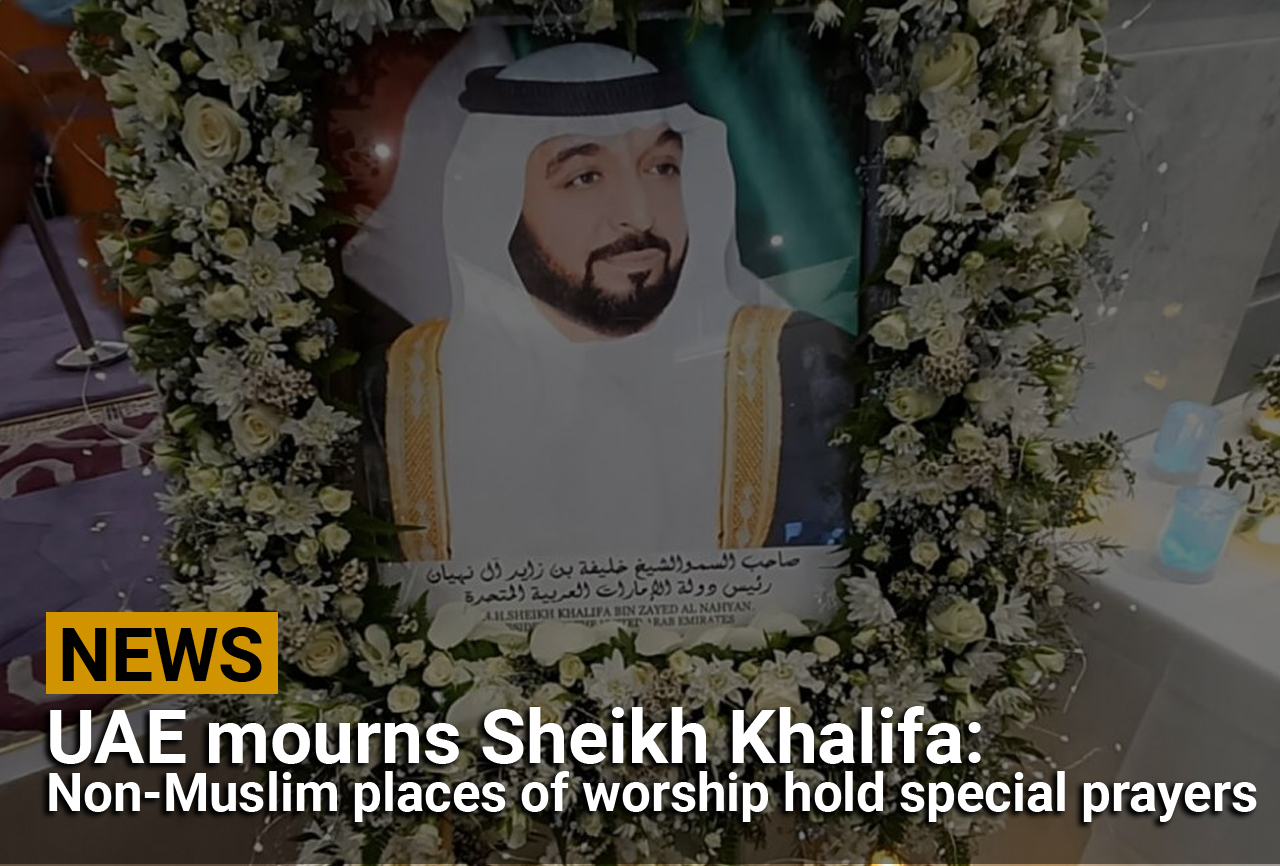 Non-Muslim religious communities across the country held special prayers in memory of the beloved late President, Sheikh Khalifa Bin Zayed Al Nahyan, 73, who passed away on May 13.

“Sheikh Khalifa bin Zayed Al Nahyan was a great leader and a statesman. He continued the legacy of his father and the founder of this country, the late Sheikh Zayed bin Sultan Al Nahyan. Most of all, Sheikh Khalifa loved his people and his country. His vision for the country is evident in the many developmental projects and reforms undertaken under his presidency,” the Bishop said in his condolence message.

He underlined that the demise of the beloved leader has left a void in everyone’s hearts.

“May God make well the space left behind by him and grant him heaven’s reward. I assure my prayers for the late Sheikh Khalifa bin Zayed Al Nahyan and my spiritual closeness to his family. I sincerely extend my condolences to the officials of the Government of the UAE and pray that the God of all consolation may grant His solace to all the members of the Royal Family.”

Hundreds of worshippers gathered at BAPS Hindu Mandir for the prayer assembly, which was led by Pujya Brahmaviharidas Swami, the religious leader and temple’s spokesperson.

“We are specially celebrating the life of a leader who continues to inspire us: Sheikh Khalifa bin Zayed Al Nahyan. We know that the leader who led this beautiful nation, provided a plank for all of us to stand on, and to make our lives better. He often said the success of the UAE cannot be measured by the products we provide or the services we give but it should be measured by the quality of life and the ability to live in harmony,” Swami said in his prayer tribute.

He noted that the seeds sown by the late Sheikh Zayed have been further nourished and nurtured by Sheikh Khalifa. “Our heartfelt prayers for a great leader who should continue to guide because such leaders never pass away.”

“Values of inclusion, mutual respect and religious freedom have been ingrained in the UAE’s DNA since the country’s founding in 1971. As a result, people of countless faiths and more than 200 nationalities now live together, side by side, in the UAE and are enlightened by the wisdom and legacy of the founding father, the late Sheikh Zayed bin Sultan Al Nahyan. These values were further crafted based on solid structures towards ensuring their future sustainability, under the guidance of wise leadership of Sheikh Khalifa bin Zayed Al Nahyan that catered to building human beings and making the world a better place for humanity,” said Surender Singh Kandhari, chairman, Guru Nanak Darbar Gurdwara, Dubai.

Worshippers also wrote messages in a condolence book and paid their respect to Sheikh Khalifa.

“The founding father, the late Sheikh Zayed bin Sultan Al Nahyan, once said: ‘To treat every person no matter what his creed or race as a special soul a mark of Islam is’. Sheikh Khalifa bin Zayed Al Nahyan continued to follow the late Sheikh Zayed’s example, and the nation has become a model for moderation, inclusion, and generosity in the Middle East. Sheikh Khalifa was a very visionary and tolerant person and always offered his support to all the people in need. We pray to the Almighty for the departed soul to rest in eternal peace,” Kandhari added.

Similar prayer sessions were held at churches and other places of worship across the country. Many residents who couldn’t attend the services in-person, prayed from their homes.