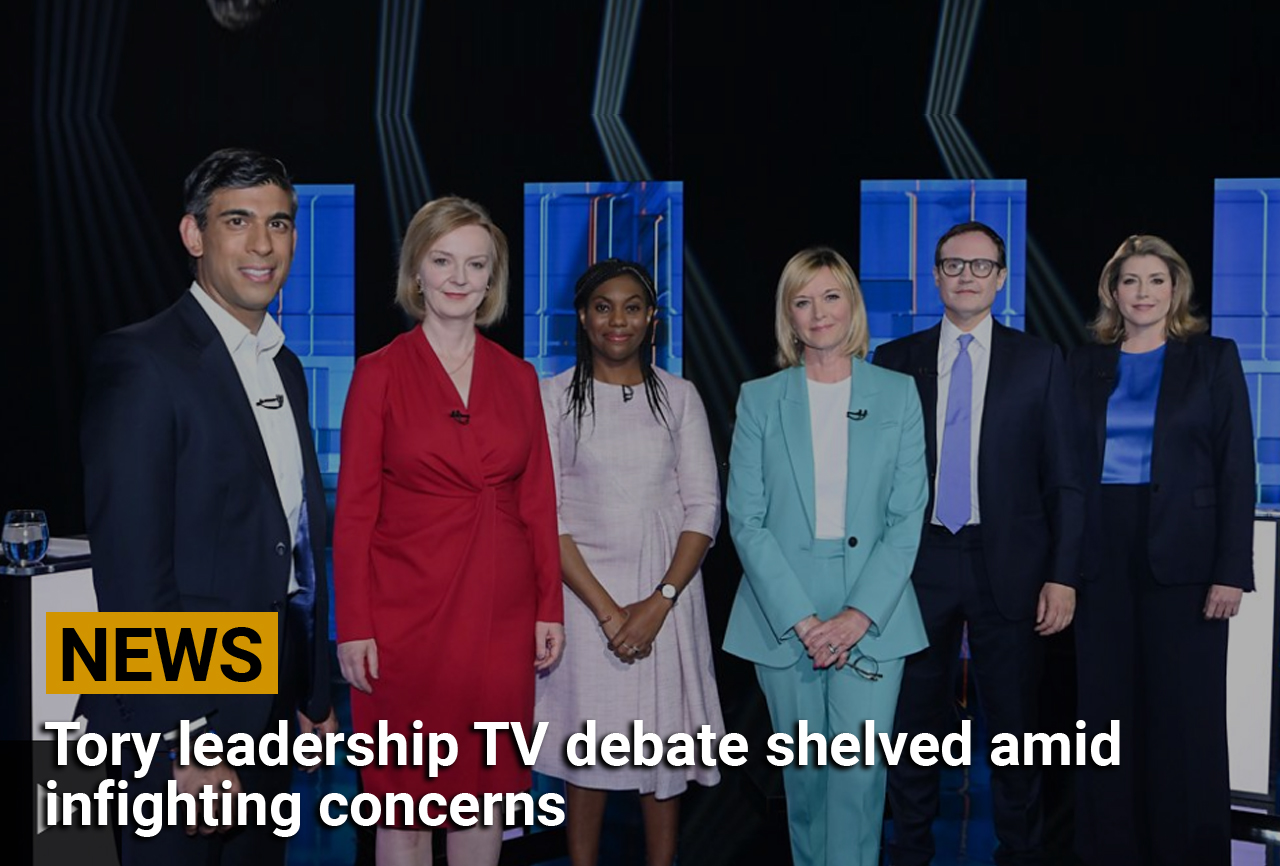 The two contenders clashed repeatedly during an ITV debate on Sunday over each other’s economic plans and record in office.

It comes amid concerns in the Tory party about infighting in the contest.

The five remaining candidates face another round of voting among Tory MPs later to stay in the race.

The heated hour-long ITV debate laid bare divisions between ex-chancellor Mr Sunak and Foreign Secretary Ms Truss over the future of the economy.

Mr Sunak also clashed with Trade Minister Penny Mordaunt over her plan to scrap his economic rule of only borrowing to invest.

Along with fellow contenders Tom Tugendhat and Kemi Badenoch, the trio had been invited to take part in a live debate on Sky News on Tuesday.

It is understood that neither Mr Sunak nor Ms Truss had confirmed they would take part in the event, which was due to be hosted by presenter Kay Burley.

But the event is now off, after Sky said their campaigns confirmed they did not want to participate.

Mr Sunak is in pole position to secure a place in the final two places after MPs finish their voting rounds his week.

The next stage in the contest sees around 160,000 party members picking the winner in a ballot.

Ms Truss, who finished third last time, is locked an an increasingly bitter battle with second-placed Ms Mordaunt to secure a place in the run-off.

It is understood that Ms Truss wants to focus on hustings between Tory MPs, whilst a source close to Mr Sunak said he would be “happy” to do more debates if he qualifies for the final two.

A source in Ms Mordaunt’s campaign said she hoped there would be “ample opportunity” for media scrutiny later in the contest, adding: “MPs aren’t just picking a new leader, but picking the nation’s new PM.”

The stakes are high and time is short – so the TV debates so far have been tense.

Rishi Sunak and Liz Truss in particular have been willing to knock lumps out of each other.

That’s left some Tory MPs nervous that the party will emerge from this process badly damaged. Remember: whoever wins, these candidates are going to have to work together in some form.

Mr Sunak and Ms Truss haven’t said the brutal nature of Sunday’s debate was the reason they don’t want to take part on Tuesday.

But this has not been a friendly exchange of ideas so far. It’s felt more like a battle for the future of the Tory Party.

Some Tory MPs will be relieved the won’t be more of it in public tomorrow. Others will accuse Mr Sunak and Ms Truss of dodging public scrutiny.

The cancellation comes amid concerns in the Tory party about the tone of the campaign.

As well as the two heated live TV debates, the past week has also seen supporters of the candidates disparage their rivals through briefings to the newspapers or during media interviews.

In the latest personal attack on Monday, Tugendhat supporter and International Trade Secretary Anne-Marie Trevelyan questioned Ms Mordaunt’s record as a minister at her department.

Speaking on LBC radio, she accused Ms Mordaunt of focusing on her leadership bid for the last few months, leaving other ministers to “pick up the pieces” of her departmental work.

The claim was rejected by former minister Harriett Baldwin, an ally of Ms Mordaunt, who said she was “one of the most hard-working ministers and constituency MPs I know”.

Ahead of the TV debate cancellation, former cabinet minister Brandon Lewis said the campaign had so far been “plagued by allegations of dark arts and dirty tricks”.

Writing in the Times, he added that “aggressive briefing and counter-briefing only adds to Labour’s research folders” and would prove a “gift to the opposition”.

Warning that rival parties would “take any opportunity they can to drive a wedge between rival campaigns and exploit division”, he added that the rest of the contest “cannot be characterised by personal attacks and propaganda”.

Opposition parties criticised Tory candidates over the cancellation of the debate, with Labour leader Sir Keir Starmer saying the withdrawals demonstrated a lack of confidence.

“I can see, based on what I’ve seen in the debates so far, why they want to do so because this is a party that is out of ideas, out of purpose, they’re tearing each other apart,” he told reporters.