Home NEWS The ‘Freedom Convoy’ is ending, but issues ‘not going away’ 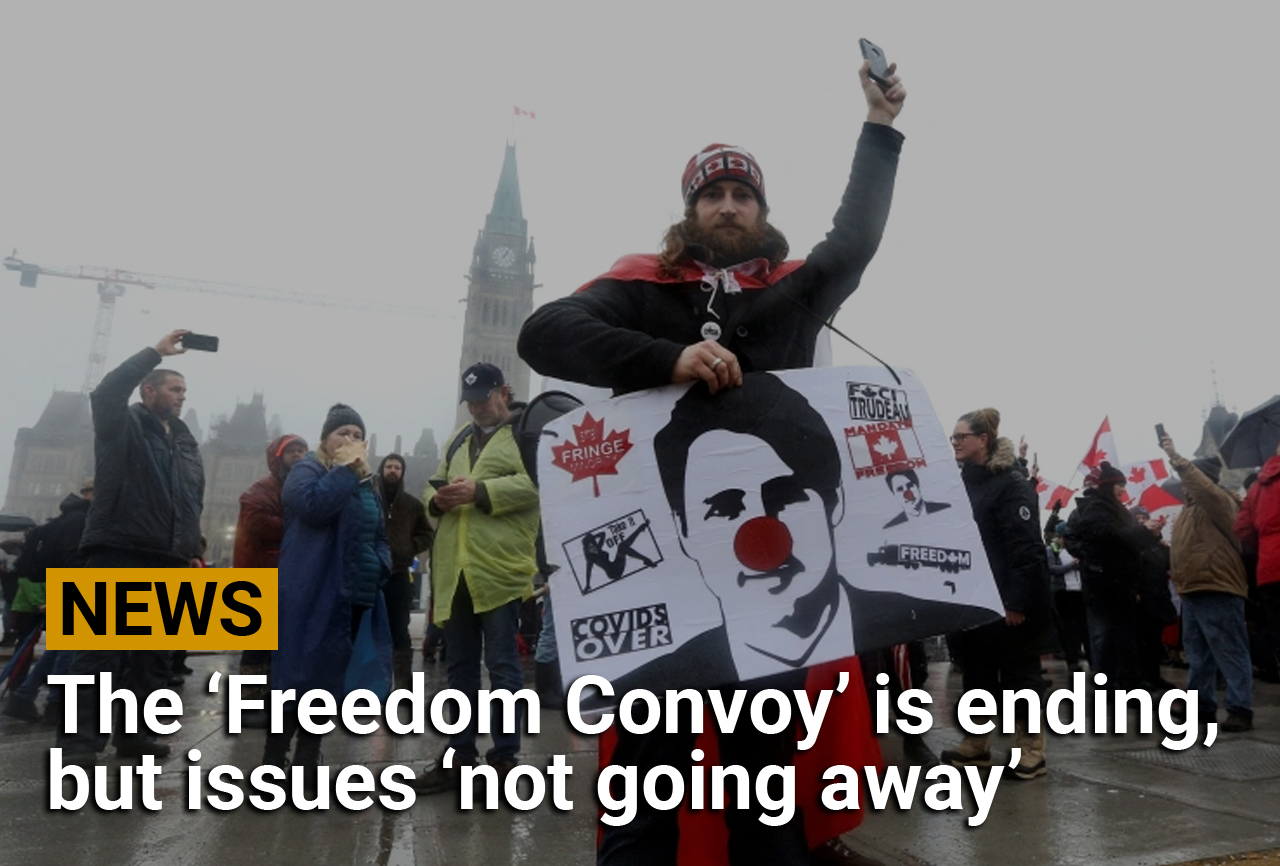 For three weeks, Canadian truckers and their supporters have occupied downtown Ottawa.

Organised by far-right activists, the so-called “Freedom Convoy” has dominated international news headlines as participants called for an end to all coronavirus restrictions in Canada and for Prime Minister Justin Trudeau to be removed from office, among other things.

On February 14, Trudeau invoked a never-before-used emergency measure to give his government sweeping powers to disperse the demonstrators, and police on Friday began arresting participants in the blockade that has paralysed downtown Ottawa.

While the protest – which Ottawa residents called an “occupation” and officials at all levels of government described as unlawful – is coming to an end, the issues that fuelled it are not likely to go away.

Carmen Celestini, a post-doctoral fellow with The Disinformation Project at Simon Fraser University, says the convoy is the culmination of the growth during the COVID-19 pandemic of online communities rife with conspiracy theories, misinformation and disinformation. “Simultaneously, we had right-wing extremist groups … making a concerted recruitment effort to spread ideologies within these social communities being created online,” she said.

We can see that too with slogans that they’re using, like Make Canada Great Again. We see these terms that sort of have filtered out from the south [the United States] up here to Canada.

Even some of the leaders, with the way that they were articulating what their end goal was, it wasn’t simply the end of the [coronavirus] mandates, but also for them to have a role in our government and to have control over the democracy.

While there was a movement with people who were protesting for genuine concerns, people who were there because they see themselves as heroes, saving Canada from these conspiracy theories. We also see nefarious characters acting out with extremism and with almost a dismantling of our democratic process.

If we look at what was happening during the pandemic, people were afraid of losing their jobs, or not having money to pay rent, not being able to care for their families or feed their families or house their families. It seemed never-ending that this perpetuation of disaster or fear was there, and so you try to find some type of resolution for that fear. Some people may turn to their religion, but when prayers don’t work … you try to find what is human-made that is making this happen.

For conspiracy theories to take effect, there also has to be distrust in institutions. So we see this sowing, which has been happening for a while, of distrust of legacy media, distrust of the government, distrust of most institutions. And so there’s also an aspect of disenfranchisement.

Politically it’s not a group of people who are angry at the political system or angry with a specific party; they’re angry at an individual. Everything is directed towards Prime Minister Justin Trudeau, and he is so interlinked to these hierarchical conspiracy theories that he really has become the problem.

We see a rhetoric of more anger. The people who are participating as [political] candidates spreading conspiracy theories, spreading name-calling, things that were not common within the politics of Canada, and we see new players trying to engage through these conspiracy theories to create their own government movement. This is somewhat new.

This isn’t going to go away once the protests have been dismantled. That will be something that is continuously built upon until the next election, which can grow populism and nationalism in Canada, much more so than it has been already.

These are things that previously we have dismissed. If you think about conspiracy theory, you think of somebody who is on the margins of society and then have stereotypical ideas of them wearing a tin-foil hat or not really understanding politics and not understanding reality. Then people who engage in misinformation or disinformation, we also approach with mockery or dismissal. But I think it behooves us to engage in this, understand it, and learn how to interact with it to stop it.

At this point, even if all of the mandates end … that distrust and sense of disenfranchisement is not going to go away. As a whole, we didn’t take it seriously enough and we didn’t engage with it and try to counter it, and so now we’re really feeling the impacts of this.

This is articulated truly as a battle for Canada, for the world, against this new world order and the figures like the prime minister who are attached to this.