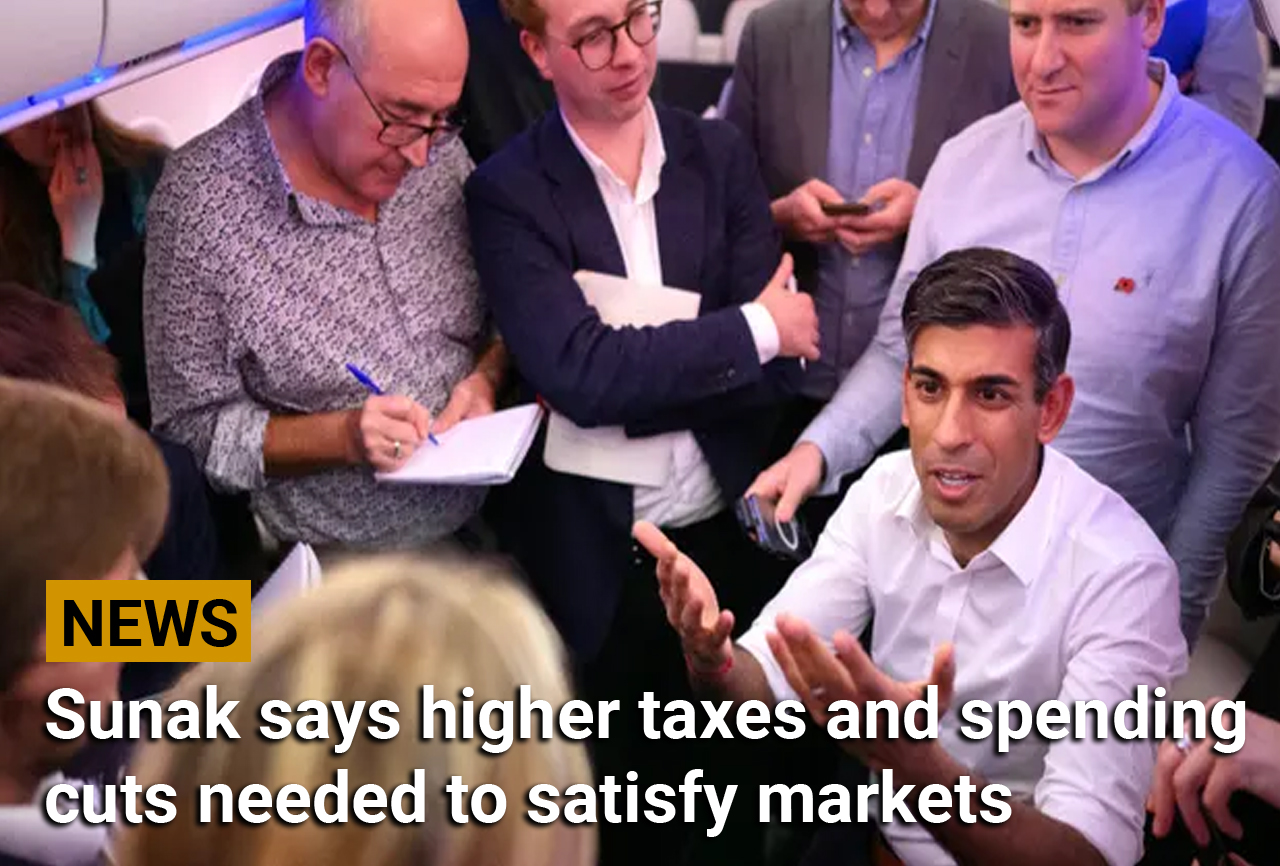 The prime minister and the chancellor have attempted to prepare the ground for a bleak autumn statement, saying that everybody should expect higher taxes and arguing that financial markets were expecting deep cuts to public spending.

Speaking en route to the G20 in Bali, Rishi Sunak told reporters that the reason financial markets were no longer in turmoil was because they expected the government to clamp down on borrowing and squeeze spending.

“Financial conditions in the UK have stabilised clearly, but they have stabilised because people expect the government to take the decisions that will put our public finances on a sustainable trajectory, and it’s the government’s job to deliver on that,” Sunak said. “And that’s what the chancellor will do.”

Sunak and Hunt have not committed to preserving the pensions triple lock or to uprating benefits in line with inflation, but the prime minister said he was “cognisant of supporting the most vulnerable”.

But he added that they must “crucially [be] delivering on the expectations of international markets, especially to make sure that our fiscal position is on a more sustainable trajectory.”

His comments came after Jeremy Hunt told Sky News’s Sophie Ridge on Sunday that he hoped to make the coming recession, forecast to be the longest in history, “as short and shallow as possible”, and that the government would be “asking everyone for sacrifices”.

“I think that as Simon Schama would say, we have faced bigger challenges in our history in the past and we are also a compassionate country.”

He told Sky news: “I think what people recognise is that if you want to give people confidence about the future, you have to be honest about the present. And you have to have a plan.

“This will be a plan to help bring down inflation, help control high energy prices and also get our way back to growing healthily, which is what we need so much.”Advertisement

Sunak said he wanted to use the UK’s presence at the G20 to underline the group’s foundation as an economic forum formed in the 2008 crisis and to renew that purpose of international cooperation on the economy, despite Russia’s presence at the summit overshadowing much of the achievable business.

He said the UK was not the only nation facing economic turmoil, a refrain he is set to use throughout the buildup to the autumn statement to link the UK’s problems to global issues such as Ukraine and energy prices.

Labour has said the UK is alone in G7 nations in using austerity as the prescription to tackle potential recession. Despite a third of the world predicted to be in recession, Labour said the UK was experiencing particularly low growth because of Conservative policies, seeing the UK fall to the worst growth in the OECD behind Chile, Italy and Mexico.

Asked if the UK should be prepared for a prolonged and painful recession, Sunak said that the autumn statement would set out how the UK would recover. “Part of our job is not just to bring stability back to the system, which we will do, but it’s also to lay the foundations for the economy to recover and grow,” he said.

“Ultimately, that’s what we all want to see. That’s how we’re going to be able to cut people’s taxes over time and support public services. And you’ll hear that side of the equation from the chancellor as well.”

John Glen, the chief secretary to the Treasury, said ministers would be seeking to make savings through “rooting out waste”.

He said the government could be made “more efficient” by accelerating the sale of under-used buildings, particularly “expensive central London properties”, and “turbo-charging” plans to digitise public services.

Writing in the Sunday Telegraph, he said: “To continue delivering the things people care about in the face of inflationary pressures, without making the problem worse through extra spending across the board, we have to take difficult decisions and make government more efficient. That means rooting out waste.

“It’s outrageous that public money – your money – is being soaked up by the system when it could be channelled towards areas that really need it.”

The shadow chancellor, Rachel Reeves, warned that “public services are already on their knees”. “Seven million people are waiting for an NHS operation or support … I don’t believe that austerity 2.0 after the austerity that we’ve gone through for the last 12 years is the right approach,” she said.

Sunak will arrive in Indonesia on Monday evening for the G20 summit which has been overshadowed by the presence of Russia, though President Vladimir Putin has pulled out of attending.

He will tell assembled world leaders that Russia’s war in Ukraine has affected “every household on the planet” because of rising global food prices caused by choking off Ukrainian grain supplies as well as surging energy bills.

Presenting a five-point plan on the global economy, the prime minister will say that support is still needed for the most vulnerable – including international aid – but foreshadowed the end of more widespread support for middle income families struggling with the cost of living including on energy bills or mortgages ahead of the autumn statement.

From Italy to Sweden, Hungary to France, the far right is once again a force to be reckoned with. Its hostility towards immigrants encourages xenophobes everywhere, including in India. Its social conservatism threatens hard-won LGBTQ+ rights. Its euroscepticism has already upset the dynamics of the EU.

The normalisation of far right rhetoric has gone far enough. For decades, Guardian journalism has challenged populists like this, and the divisions that they sow. Fiercely independent, we are able to confront without holding back because of the interests of shareholders or a billionaire owner. Our journalism is always free from commercial or political influence. Reporting like this is vital for democracy, for fairness and to demand better from the powerful.

And we provide all this for free, for everyone to read. We do this because we believe in information equality. Greater numbers of people can keep track of the events shaping our world, understand their impact on people and communities, and become inspired to take meaningful action. Millions can benefit from open access to quality, truthful news, regardless of their ability to pay for it.