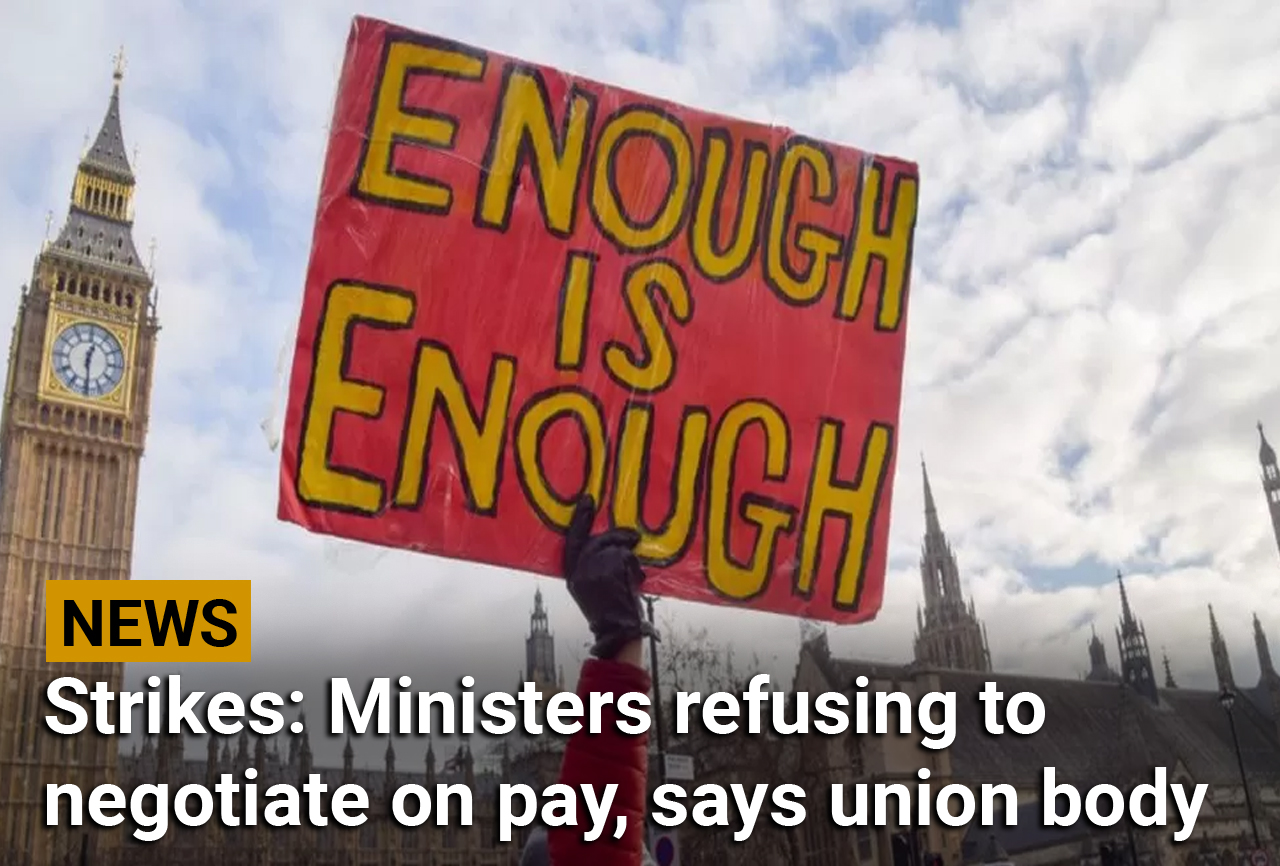 The Trades Union Congress (TUC) has accused the government of refusing to negotiate on public sector pay.

Its new general secretary, Paul Nowak, suggested in a BBC interview that ministers were using pay review bodies “as a human shield” in negotiations.

There has been widespread strike action in recent months as prices have soared.

But the government has said if public sector wages rose in line with the cost of living, it would lead to “worsening debt”, leaving “everyone poorer”.

Speaking to the BBC’s Today programme, Mr Nowak argued that independent pay review bodies were going into negotiations with their “hands tied” by the government.

“The pay review body process itself is in danger of being brought into disrepute because the government is hiding behind the pay review bodies, refusing to negotiate on pay and refusing to reach a reasonable settlement with our public sector unions,” he said.

A government spokesperson said: “We have been reasonable in our approach to agreeing to the independent pay review bodies’ recommendations for public sector pay rises.”

Nurses across England, Wales and Northern Ireland held the largest strike in the history of the NHS during December and more action is planned for January.

Meanwhile, train and postal services have been disrupted as rail workers and Royal Mail staff walked out in rows over pay and conditions.

The rate of price rises – or inflation – reached 10.7% in November, the highest in 40 years, stoked by soaring energy bills.

Workers are seeking wage rises in line or above inflation as a result.

On his first day in the job, Mr Nowak also said he was hopeful there was a “landing zone” between the offers on the table from government and the demands of unions on pay.

“What’s crucially important is that government actually sits down and negotiates,” he added.

Mr Nowak has replaced Frances O’Grady as head of the TUC, which represents unions in England and Wales.

In an earlier interview with the BBC, he warned that further strike action may be scheduled in the new year without progress on talks.

He said workers “feel that they have no alternative [to strike action]” because of the rising costs they are facing.

“When you think about those energy bills landing, the cost of the weekly shop, filling up your car, rents and mortgages going up – the one thing that isn’t going up is wages.”

Mr Nowak added that the decision to strike was a “really difficult” one for its members, who often lose out on pay during walk outs.

Rail strikes will continue on 29 December as TSSA union members at West Midlands Trains and Great Western Railway walk out in a row over pay as well as terms and conditions.

Border Force staff, including many who check passports, are staging further strikes which will last until 31 December, although disruption at six airports affected has been reported as “minimal”.

Driving examiners who are PCS members are also on strike until 31 December in a row over pay, pensions and redundancy terms, and action will continue throughout January.

The head of the PCS union representing staff has warned that industrial action could last well into 2023.

Rail travel in the first week of January, when many people return to work after Christmas, is expected to be disrupted because of strike action.

Members of the RMT union will walk out on 3 January and 4 January. They will strike again on 6 January and 7 January.

Network Rail, which operates and maintains the UK rail system, has warned people to “only travel if absolutely necessary” on those days.

In addition, members of Aslef will walk out on 5 January. Train operator Southeastern has warned there will be no services on that date and severe disruption on the days before and after due to the strikes and has warned customers to check their website before travelling.

The Rail Delivery Group, which represents train operators, said the RMT strikes will mean only around 20% of services will operate and “half of the network will shut down”.

President Raeisi: Iran will show mercy to those deceived, but not insurgents

Several dead and wounded in blast outside Kabul military airport