Home Uncategorized Russia is our enemy too, say Muslim fighters readying for war in Ukraine 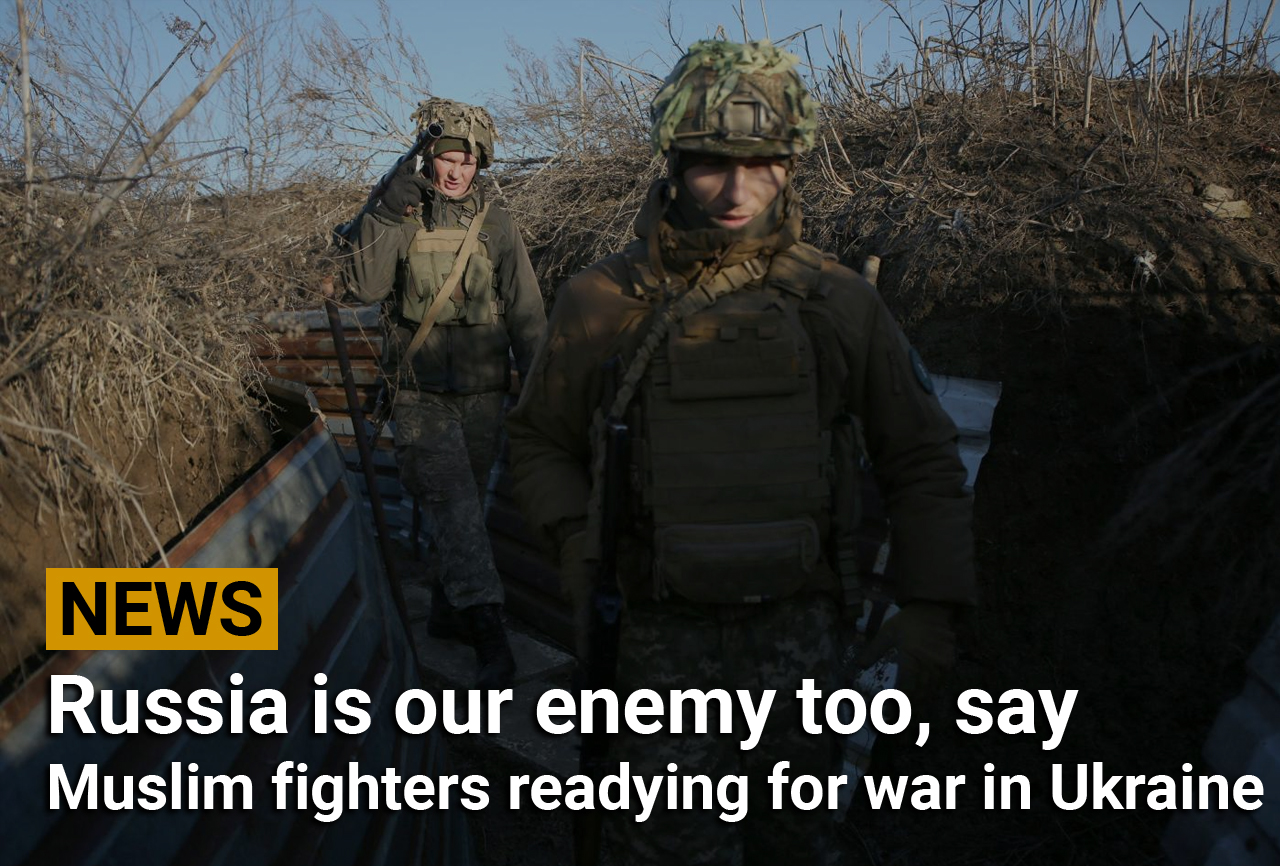 “I just want to kill Russians,” an amiable voice says in surprisingly good English, before asking to be identified only by his military call sign “Ninja”.

“The Russians,” the fighter explains to Middle East Eye, “are all over Kazakhstan,” the former Soviet republic in Central Asia from which he hails, and the fear of reprisals if he is captured are all too real.

Russia has amassed roughly 100,000 troops near its border with Ukraine, sparking fears of a possible invasion of the country. Reports indicate that Russian President Vladimir Putin may be contemplating an attack as soon as this month.

Ukraine has been at the centre of tensions between Moscow and the West since 2014 when protesters ousted its pro-Russian president. Russia responded by invading parts of the country, annexing the Crimean peninsula and backing pro-Russian separatists in a simmering conflict in the east.

When the fighting first erupted, Ukraine’s military was in disarray, hollowed out by corruption and decades of neglect. Volunteer battalions played a crucial role defending against the Russian advance.

Groups like Right Sector attracted fighters from across the former Soviet Union. Many came from recent conflicts along its periphery in places like Chechnya, Georgia, and Nagorno-Karabakh.

Recruits like Ninja were eager to take the fight to their long-time enemy in Moscow, and with war clouds on the horizon many are once again itching for battle.

But Ukraine’s government may have other ideas. It has launched a series of reforms to modernise the military. The country’s 250,000 enlisted troops are now more disciplined, better trained, and have actual combat experience from fighting in the East.

The country has received $2.5bn in security assistance from Washington since 2014, and boasts US precision-guided Javelin anti-tank missiles and Turkish drones in its arsenal.

The volunteer militias are viewed as a threat to stability and officials in Kiev have tried to rein them in. They fear foreign fighters risk staining Ukraine’s image as it tries to present itself as a responsible western state that might one day join Nato and the EU.

Most of the volunteer units have been incorporated into the regular army and national guard.

As eager as they are to fight the Russians, foreign Muslim fighters like Ninja have drawn added concern from the Ukrainian authorities. “You can say I am in the Jihad,” he says chuckling.

“There is one thing you have to understand, we are not only fighters, we are also Muslims and everyone is worried about the whole media ISIS or al-Qaeda shit,” he says, referring to Kiev’s concern that the fighters may be portrayed as radicals.

But Muslim fighters haven’t just come from abroad. While Ukraine is a staunchly Orthodox Christian country it is also home to Crimean Tatars, an ethnic Turkic Muslim group that numbers about 280,000. They comprise roughly 12 percent of the population in their ancestral homeland of Crimea.

And like the Black Sea peninsula, the Tatars have long been in Moscow’s crosshairs. They were forcibly deported from Crimea by Stalin in 1944 and only started returning from labour camps in Central Asia in the 1980s.

‘Disbanding Muslim militias and other kinds of such units is hopeless, unpatriotic and untimely’

Russia has been accused of harassing and targeting the minority which was widely opposed to its annexation of the territory. Moscow denies its actions are politically motivated and claims it is only arresting “terrorists”.

The bitter memories and recent tensions have made the Tatars staunch opponents of Moscow.

“When somebody takes your home and tries to offend your family, if you are a real man you should take up a rifle and protect it all until your last breath,” says Renat, a Tatar soldier who hails from Crimea, currently serving on the front lines with the Ukrainian armed forces.

Renat, who has been a soldier since 2012, tells MEE that he and his comrades are ready to fight should Russia invade.

“Our military spirit is on high level,” he says, as he compares the Ukrainian army of today to that of 2014, pointing out that everything from ammunition and tactics to the soldiers’ experience has improved.

Many Tatars have been fighting Russia since the beginning of the war. Their path has followed the trajectory of the conflict itself; from a battle waged by a disparate cast of volunteers to a more professional fighting force.

Khai is a Crimean Tatar soldier from Evpatoria, Crimea. He was a volunteer in Right Sector until 2019 when his tactical group was integrated into the Ukrainian Armed Forces.

Khai, along with all the other Muslim fighters contacted by MEE, spoke fondly of Right Sector, the ultra­nationalist militia which has drawn heavy criticism from western, and Ukrainian, officials for what they say is its promotion of far-right ideology.

When asked whether he faced any hostilities, Khai states: “As a Muslim I felt respected and cared for by my comrades.”

Rustem Mahmut Oglu Ablyatifov is a Crimean Tatar and former Right Sector fighter. He offered to share his full name because he says the Russian FSB, Moscow’s secret service, already has him identified as an enemy.

“They searched my 80-year-old mother’s house in Crimea,” he tells MEE. “A friend in the Defence Ministry informed me that all my information, including the names of my children, has been leaked to FSB.”

He says he was proud to serve in Right-Sector, which was filled with adventurers, dedicated fighters, and some neo-Nazis. “I shared a bed on the front lines with a guy who had a Hitler tattoo, he didn’t give me any problems,” he recounts.

Despite efforts to integrate the group into the armed forces, some units of Right Sector continue to operate on the front lines and fighters are able to travel there from Kyiv. Ninja, the Kazakh fighter, says he is in touch with his commander to return to one of these units.

“The army works with Right Sector,” he explains. “Sometimes guys on the front come under mortar or sniper fire and you need someone to shoot back,” but Ukraine has been at pains not to escalate the conflict for risk of provoking a massive Russian retaliation, “so they send us to shoot at them, because they can say we are independent.”

Fighting on ‘any condition’

With the threat of a Russian invasion looming, the topic of militias is springing up once again. Despite Kyiv’s efforts to modernise the armed forces, most military experts agree the Ukrainian army would stand little chance against a full-scale Russian assault.

Thousands of Ukrainian civilians have been learning combat skills to fight as partisan warriors in the event Russia occupies the country. Some officials hope that the threat of a drawn-out guerrilla conflict can be used to deter Putin.

The chairman of the US Joint Chiefs of Staff, General Mark A Milley even warned his Russian counterpart that Moscow would face a full-scale insurgency should it invade, the New York Times reported.

‘When somebody takes your home and tries to offend your family, if you are a real man you should take up a rifle and protect it all until your last breath’

Crimean Tatar soldiers who spoke with MEE over WhatsApp say they regret Kyiv’s efforts to break up the militias, three of which were predominately Muslim and regarded as motivated and deadly; the Dzhokhar Dudayev and Sheikh Mansur units comprised mostly of Chechens, and the Crimea unit, which was mainly Tatar.

Yevhen Hlushchenko, a Muslim cleric and military chaplain who goes by the name “Imam Abdullah”, says officials in Kyiv rejected Crimean Tatars’ requests to form an all-Muslim unit within the Ukrainian army – “they didn’t want something with a religious or ethnic form”.

“We see this as some kind of betrayal,” Khai said. “Disbanding Muslim militias and other kinds of such units is hopeless, unpatriotic and untimely,” especially now when Kyiv faces the risk of a fresh Russian invasion.

The war in Donbas has claimed roughly 14,000 lives over the past eight years. While the conflict has been confined to the east, nearly all Ukrainians have been impacted by the fighting in some way. But for many Crimean Tatars the battle is even more personal.

Renat spent the early part of his childhood in a Soviet Tatar concentration camp in Uzbekistan before he and his parents were allowed to return to Crimea. He says he will fight Russia “on any condition”, even as a guerrilla soldier. “In this” case, he emphasises, a Muslim battalion would be much more “effective”.

Medzhit, another Tatar on the front lines in Eastern Ukraine, echoed those sentiments, saying that a “strictly Muslim” unit would be “exemplary” as there would be no alcohol and drugs. Still, he says he is respected by his Christian comrades, “[We] live like a family and [are] ready for combat.” His only complaint is that at times it can be difficult to obtain halal food.

A common strand uniting the Tatars with their countrymen is a desire to fight. According to a poll by the Kyiv International Institute of Sociology some 58 percent of Ukrainian men said they would take up armed resistance should Russia invade the country.

Medzhit says the front line is normal for now, peppered with the crack of rifle and machine-gun fire. At times, the Russian-backed forces shot easel-mounted grenade launchers at their positions and lob 82mm and 120mm mortars at them.

He doubts the Russians will break through their line of defence, but if so he is confident the Ukrainian army can mount a counter attack. If all else fails he will take to a guerrilla group to continue waging the battle, “my first choice would fall on a Muslim unit”.

A BRADFORD has taken home a top honour at the British Muslim Awards 2022.