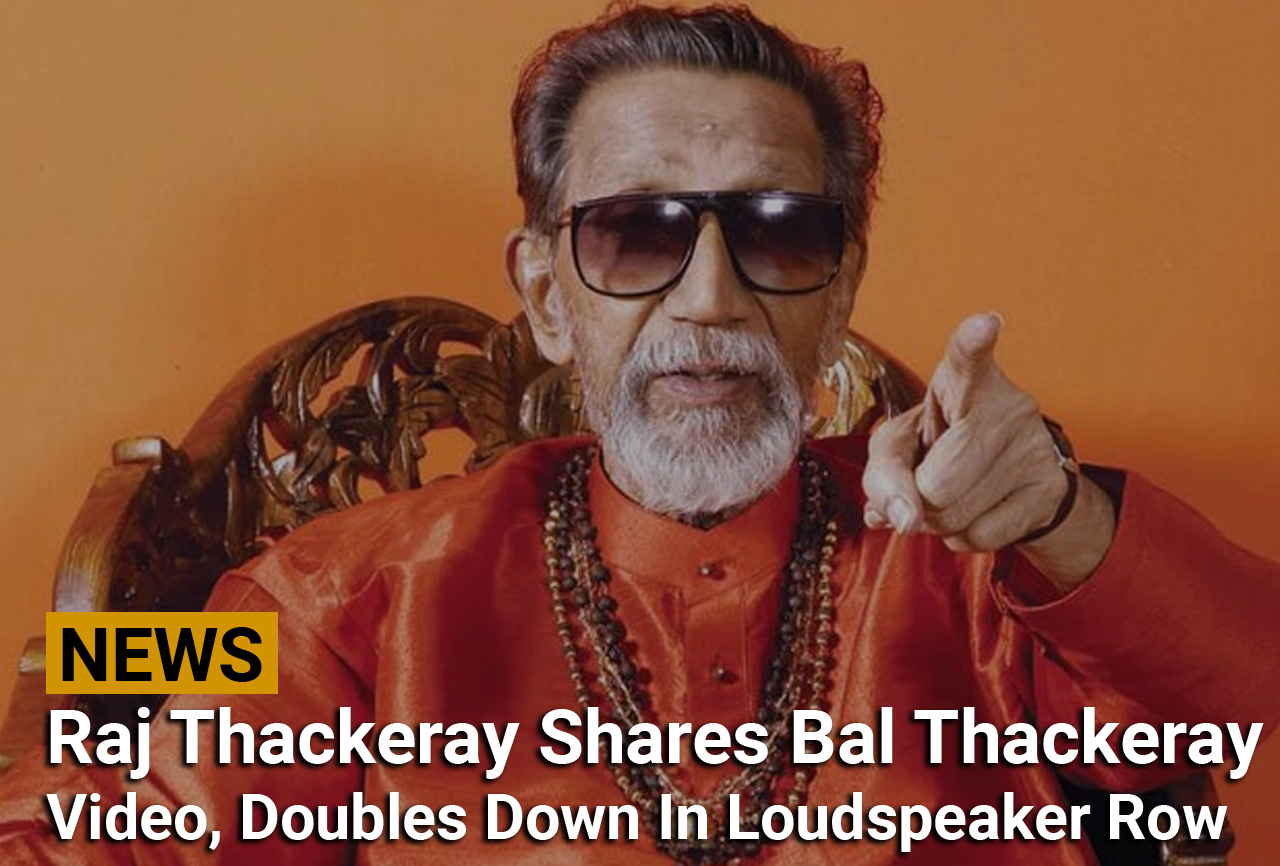 Bal Thackeray is heard saying that the Shiv Sena will not rest until it is successful in preventing people from offering namaz on roads.

The MNS chief had given an ultimatum to the state government to remove loudspeakers by May 3.24Mumbai:

Amid high tension in Mumbai over Maharashtra Navnirman Sena (MNS) chief Raj Thackeray’s ultimatum to the state government to remove loudspeakers from mosques, Shiv Sena leader Sanjay Raut today said that there is peace in Maharashtra and no protest is happening in the state. The MNS chief had on April 12 given an ultimatum to the Maharashtra government to remove loudspeakers from mosques by May 3, failing which, he warned, MNS workers will play Hanuman Chalisa on loudspeakers. He had reiterated his warning recently.

Undeterred despite being booked by the state, he on Wednesday shared a video of the Shiv Sena founder Bal Thackeray in which he is seen speaking against the use of loudspeakers and Muslims offering prayers on the roads.

In the video, shared by Raj Thackeray, Bal Thackeray is heard saying that the Shiv Sena will not rest until it is successful in preventing people from offering namaz on roads when it comes to power in the state.

“We (Shiv Sena) will not stop until we are successful in preventing the people from offering namaz on roads when we will form the government in Maharashtra,” Bal Thackeray says.

“If someone has any complaint about the Hindu religion, then they can come to us, and we will solve the issue. Loudspeakers will be removed from the mosques,” Bal Thackeray said in the video shared by Raj Thackeray.

Responding to the charge, Shiv Sena leader Sanjay Raut claimed that no illegal loudspeakers are functional in the state anymore.

“No illegal loudspeakers running in the state… Bal Thackeray & Veer Savarkar are the ones who taught Hindutva to the country. Shiv Sena’s school of Hindutva is original,” Mr Raut added.

“Maharashtra has a Thackeray government. Even if the state has a Maha Vikas Aghadi government, it is helmed by Uddhav Thackeray. He is the Sena chief, son of Hinduhriday Samrat Bal Thackeray. So, he doesn’t have to take advice on praying on roads during namaz and illegal loudspeakers on masjids,” he said.

Without taking the names of the BJP and MNS, Mr Raut told reporters that people do not take cognisance of people who, with the support of “pseudo Hindutvawadis”, conspire against the Shiv Sena. -ADVERTISEMENT-Ads by

Miffed at the Bal Thackeray jibe, he said, “We have not stooped that low. We still run on his principles. Balasaheb had taken a stand on loudspeakers and the offering of namaz on road. He stopped it after coming to power. No one should teach Hindutva to the Shiv Sena.”

Several mosques in and near Mumbai kept loudspeakers off during azaan this morning following the threat by Raj Thackeray to play Hanuman Chalisa on loudspeakers wherever azaan is recited on them.

The Maharashtra government has made extensive preparations to maintain law and order, leaves of police personnel have been cancelled and forces deployed in sensitive locations. Chief Minister Uddhav Thackeray on Tuesday had ordered the police to take all measures to maintain law and order and not wait for anyone’s order. He also held a telephonic conversation with the Maharashtra DGP Rajnish Seth.

Aurangabad Police has registered a case against Raj Thackeray for allegedly delivering a provocative speech two days ago. Mumbai Police has issued a notice to the MNS chief under Section 149 of CrPC, invoked to prevent a cognizable offence.

The face-off between Mr Thackeray’s party and the state government helmed by his cousin Uddhav Thackeray comes ahead of the civic elections in Maharashtra, in which the BJP is attempting to get the control of the Mumbai civic body.

The ruling Shiv Sena has accused the MNS of being the “B Team” of the BJP, attempting to cut into the Sena votes with its aggressive stance on Hindutva.

Jodhpur On Edge Day After Clashes On Eid, 52 Arrests So Far