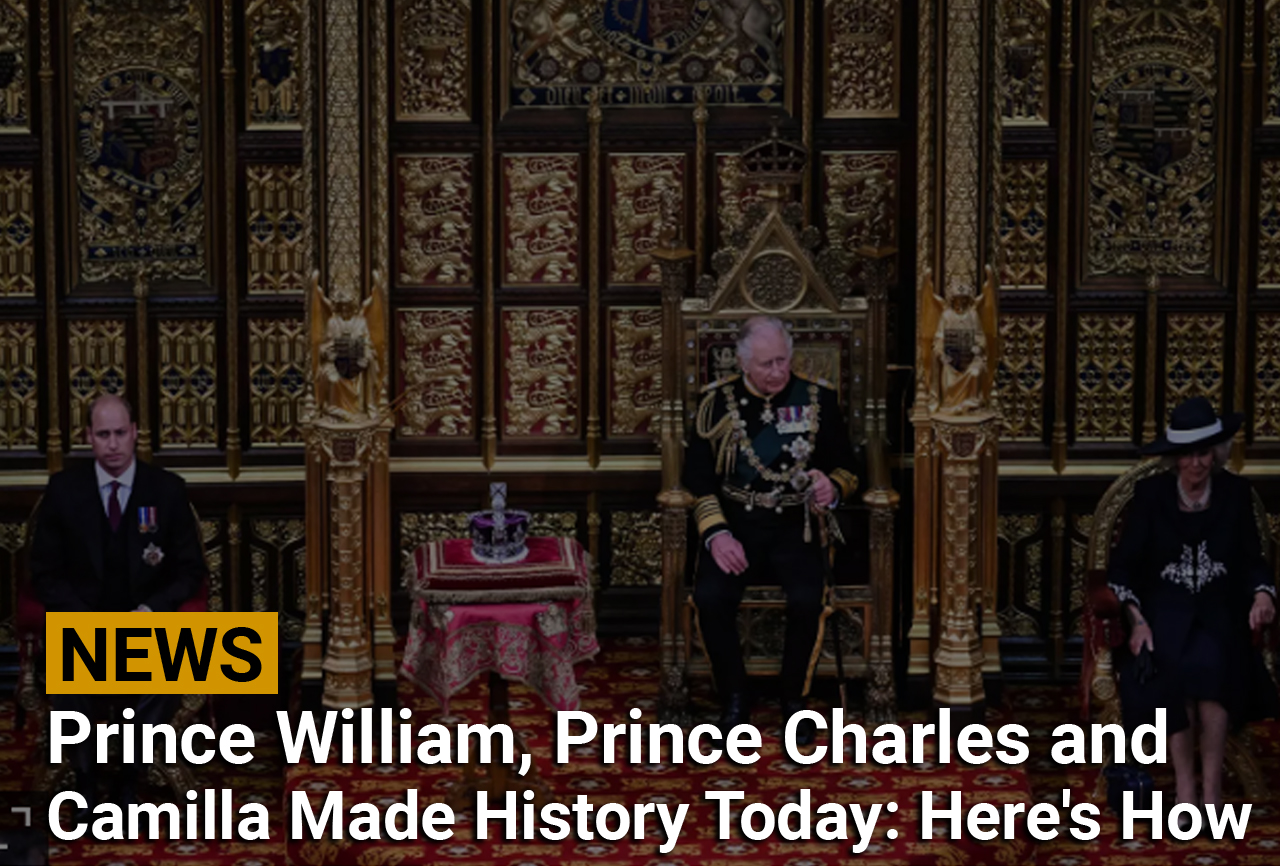 Tuesday’s State Opening of Parliament saw a handful of royal — and non-royal — firsts!

Prince Charles isn’t the only one to have made history at the State Opening of Parliament on Tuesday.

While the Prince of Wales stepped up to fulfill the important constitutional duty of delivering the Queen’s Speech for the first time, his son Prince William and wife Camilla, Duchess of Cornwall were also in attendance for the first time. A handful of other participants also made history inside the historic Houses of Parliament.

With Queen Elizabeth unable to attend the ceremony for the first time in 59 years due to ongoing mobility issues, many of the traditions, details and phrases of the historic event were subtly different from previous ceremonies. Here’s how:

The State Opening of Parliament is a British monarch’s most important constitutional duty, so delivering the speech symbolizes a major step-up for Prince Charles. It also had to be authorized in advance by Queen Elizabeth through a “Letters Patent” that temporarily transferred her constitutional authority to the Prince of Wales and Prince William.

For more on Prince Charles addressing Parliament, listen below to our daily podcast PEOPLE Every Day.

The Queen has only missed the State Opening twice before in her historic 70-year reign. She skipped the outing in 1959 and 1963 when she was pregnant with Prince Andrew and Prince Edward, respectively. Her speech was delivered by the Lord Chancellor (currently the Conservative MP, Dominic Raab).

Charles had his wife Camilla by his side as well. Her attendance had extra significance given the fact that the Queen recently expressed her wish for Camilla to be known as Queen Consort when Charles takes the throne one day.

As Monarch, the Queen delivers the speech from the ornate Sovereign’s Throne. This year, however, a space was left where the throne would normally rest. Just in front of this, the Imperial State Crown was placed on a small table to symbolize the Queen’s authority.

Prince Charles does not have a throne himself and instead delivered the speech from the Consort’s Throne, which was previously used by his late father, Prince Philip.

As Charles delivered the 11-minute speech, he used the phrase “Her Majesty’s government” instead of “My government,” which is what the Queen would use if she had delivered the speech.

Charles also concluded the speech with a reference to how “Her Majesty” was looking forward to the celebrations that will mark her Platinum Jubilee next month and the upcoming Commonwealth Games in August.

“Her Majesty prays that the blessings of Almighty God will rest upon your counsels,” he said.

Prince William was present at the ceremony for the first time, sitting to the right of Charles in one of the Chairs of State.

It signifies an important step up for the Duke of Cambridge and key preparation for his future roles as the Prince of Wales and then King.

The duty also came relatively late to William, 39, as his father attended his first state opening in 1967, when he was just 18. Like William, he sat to the side in one of the Chairs of State – only with Queen Elizabeth delivering the speech.

The royals at the State Opening of Parliament |

Professor Anne Curry became the first female herald to take part in the royal procession inside Westminster, having been appointed to the post of Arundel Herald Extraordinary on Monday.

The post of herald dates from medieval times when they had the dangerous task of carrying messages between opposing generals on the battlefield.

Today, however, the heralds are experts on such things as history and genealogy and provide advice on anything to do with the peerage and royal ceremonies. They also have a role in all U.K. state ceremonies and care for the vast historical archive of heraldic material gathered over the centuries.

Professor Curry, who is an expert in medieval history, is not the first woman to take part in the procession itself, as many of the Queen’s Ladies in Waiting have previously accompanied her through Parliament.

The role of Black Rod is one of the most historic of the many ancient rituals performed during the State Opening and dates back to an event in 1642 when King Charles I was denied entry to the House of Commons because he wanted to arrest five MPs.

Today, the holder of the position, Sarah Clarke, must recreate this moment by banging on the door of the House of Commons three times with her rod. It is only then that the doors of the chamber are opened, and Black Rod is allowed to enter the chamber to summon MPs to the House of Lords.

Ordinarily, this summon would order the politicians to “attend Her Majesty,” but with the Queen not present, the historic wording was altered to “Mr. Speaker, the Queen commands this honorable house, to attend her Counsellors of State immediately in the House of Peers.”

When Prince Charles was trumpeted into the Royal Gallery on his short walk to the House of Lords, he was listening to music played by Trumpet Major Julian Sandford and his wife, Lance Corporal Kate Sandford.

It’s not the first time the Prince of Wales has heard the couple, however, as they also played at the 2018 wedding of Prince Harry and Meghan Markle at Windsor Castle.

The Yeomen of the Guard, the royal bodyguards, have ceremonially searched the cellars of Westminster since Guy Fawkes attempted to blow up King James I in 1605 during the famous “gunpowder plot.”

On Tuesday, it was led by a woman for the first time, when Mary-Jane Tsang, the Keeper of Historic Furniture and Decorative Arts at the Houses of Parliament, was nominated for the role.

It wasn’t Tsang’s only involvement in the ceremony either, as the expert conservator also plays a key part in all of Westminster’s big state occasions.

“We are only a small team, but we are quite pivotal in away,” Tsang told the BBC Tuesday. “Our role in the State Opening of Parliament is providing historic furniture and making sure that we have the appropriate chairs of state and thrones available. So obviously that’s quite important for people to have the appropriate seat.”

“Why Not Let Him Go?”: Court Raps UP Over Samajwadi’s Azam Khan’s Plea