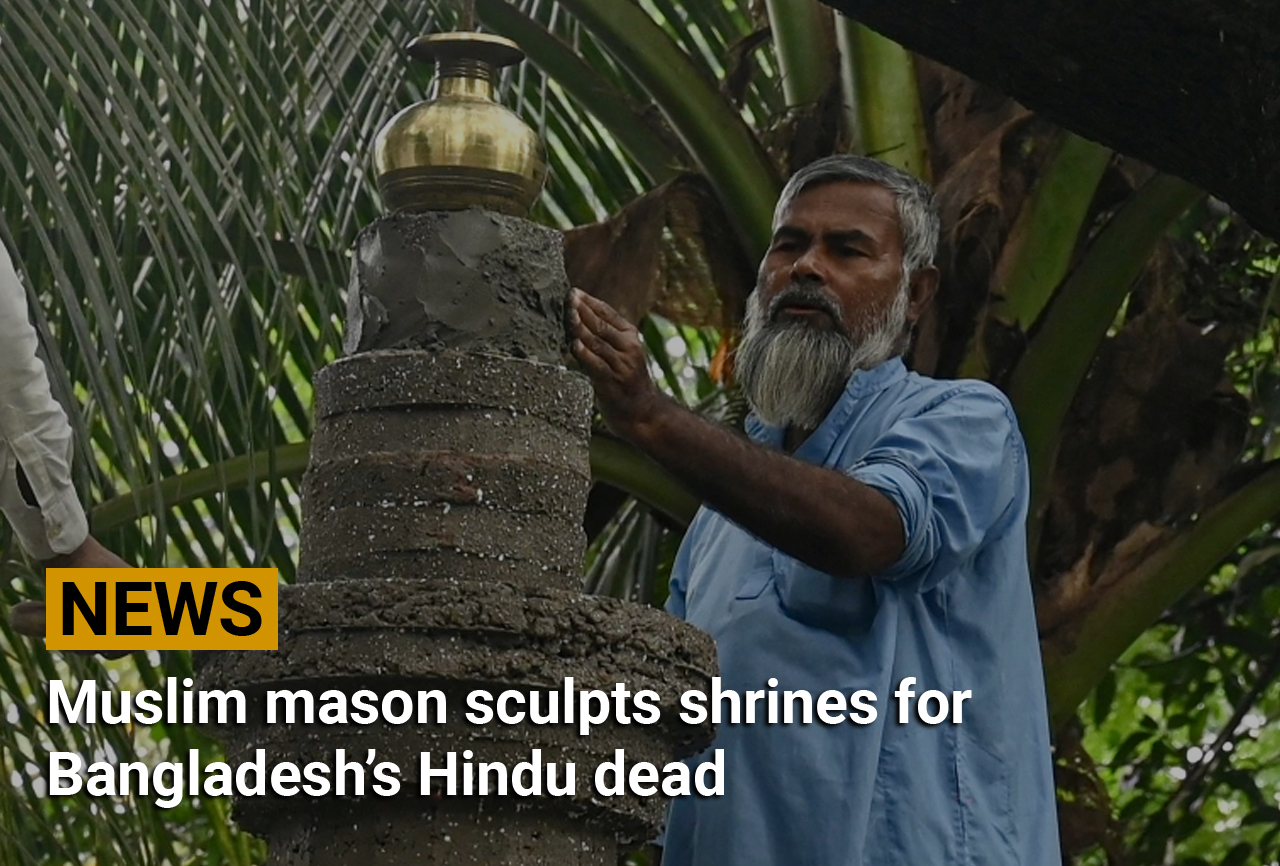 Taher Ali Khan has crafted thousands of shrines to departed loved ones at Barisal Mahashashan, the country’s largest Hindu crematorium.

A Muslim artisan has devoted his talents to shepherding the dead among Bangladesh’s Hindu minority along a peaceful journey to the next life.

Taher Ali Khan has crafted thousands of shrines to departed loved ones around the tranquil grounds of Barisal Mahashashan, the country’s largest Hindu crematorium.

The devout mason prays five times a day and adheres to all the precepts of the Islamic faith, but has often found himself fending off criticism from people who question his calling.

“My prophet said to find bread by honest work. And he advised us to refrain from stealing, hurting others or committing any crimes,” Khan, 60, told the AFP news agency.

“I work here constructing tombs,” he added. “I don’t see anything that would jeopardise my religion.”

Hindus account for about 10 percent of the majority-Muslim nation’s 169 million people and are well represented in politics, business and the civil service.

But their numbers have dwindled from approximately a quarter of the population in 1947, when millions of Hindus and Muslims fled to India and Pakistan respectively after the partition of the subcontinent into two separate nations along religious lines.

Another mass exodus coincided with the nine-month Bangladesh war of independence in 1971.

News of the recent religious violence, in which at least six people including two Hindus were killed, upset Khan, who spent the following days calling on Hindu friends to ask about their safety.

“I consider Hindus to be my brothers and sisters,” he says.

“They love me because of my work. I pour my heart out into constructing tombs because everyone wants to build something beautiful for their dead.”

Khan spends most of his time at the crematorium, labouring away at ornate samadhi shrines that crisscross the grounds around the funeral pyre.

The more humble monuments are small and unassuming concrete slabs, similar in style to Western tombstones, with ashes from the dead buried underneath.

The largest are elaborate, multitiered edifices with colourful spires that tower over the small man-made pond that greets visitors at the graveyard’s entrance, which can sell for up to 250,000 taka ($3,000).

“If I build a beautiful Samadhi for the dead, it gives me enormous satisfaction,” he says. “I feel like I have done something to help them feel good and to mourn their dead well.”

Khan learned his trade 35 years ago and by his estimation has built more than 10,000 samadhis in the time since – most of those around Barisal crematorium are his handiwork.

“Look at this beautiful one,” he says, gesturing at one of the shrines during a tour of the graveyard.

“The family wanted something beautiful for their young boy, who died suddenly. I did it with all my love and care.”

His work is in high demand from Hindus living in Barisal and from far-flung farming communities around the southern river port.

“It doesn’t matter whether he’s a Muslim, he does a solid job,” said Gouranga Das, who came to the grounds to cremate his mother and again seek Khan’s services.

“He made my grandfather’s tomb and it was very nice.”

Every year during the Bhoot Chaturdashi festival, when Hindu worshippers honour their dead by adorning samadhis with candles, he receives dozens of invitations to commemorate loved ones.

After spending more than half his life working at Barisal Mahashashan, its owners also consider him family, even though he still nominally works as a freelancer.

“People come to him for constructing tombstones for their relatives as he is the best,” said Tamal Malakar, the crematorium’s general secretary.

“We love him and his work.”