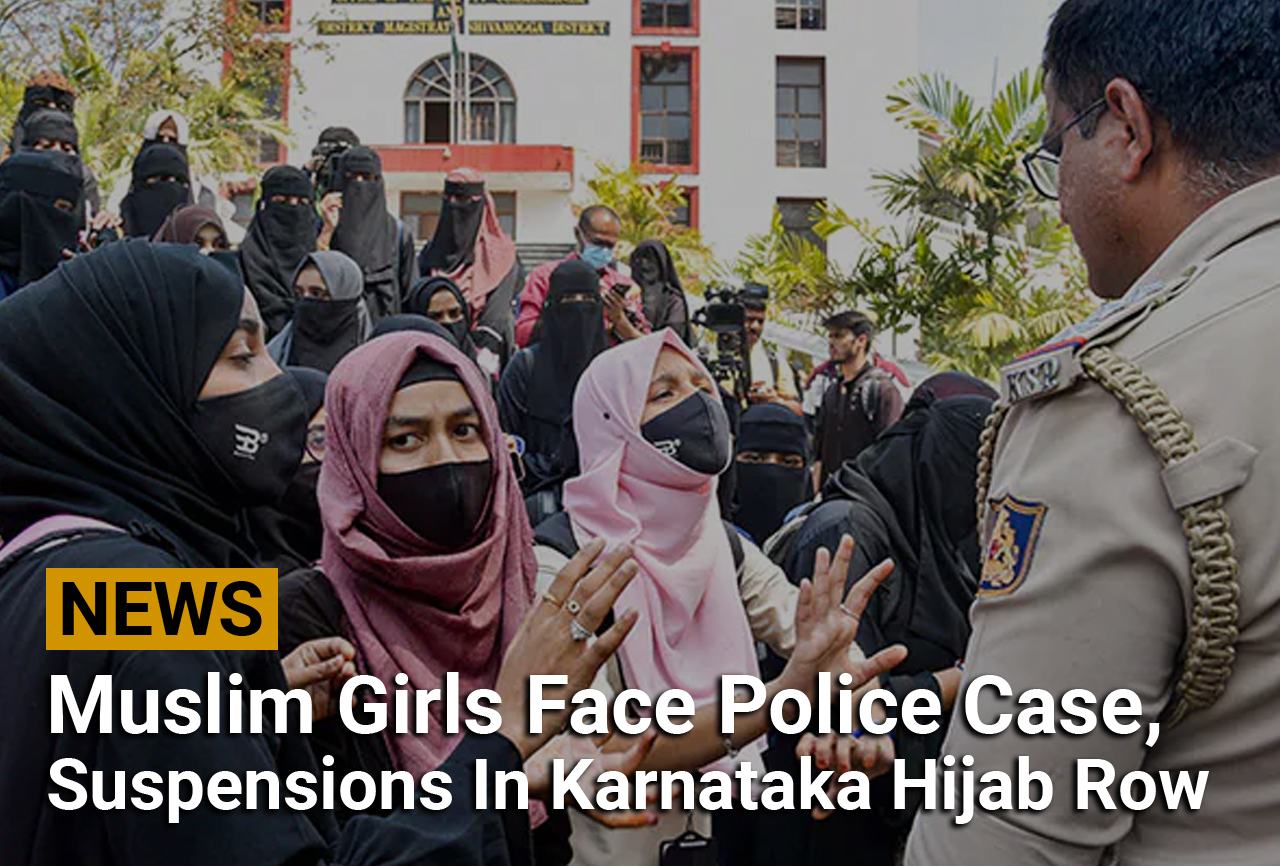 Despite a government order and the Karnataka High Court’s interim order restricting the students from wearing hijab or saffron scarves inside classrooms, many girls came to schools and colleges wearing the headscarf.

Young women and girls in many parts of Karnataka were not allowed to enter schools and colleges on Saturday as they arrived in hijabs, despite a court order, as the issue showed no signs of abating after its flare-up about a fortnight ago that prompted the government to close down institutions for a couple of days.

Chief Minister Basavaraj Bommai has blamed ‘outsiders’ for the problem and said the issue would be resolved soon.

“The problem is being created by outsiders. The issue would be resolved by the principal, students and the parents. The atmosphere needs to be calmed. I am getting all the information about the happenings in the state,” Mr Bommai told reporters in Bengaluru.

According to the information received, as many as 15 Muslim girls have been booked in Tumakuru and 58 students were suspended in Shivamogga for staging demonstrations outside their colleges.

Based on a complaint by S Shanmukha, the principal of Empress Girls Pre-University College in Tumakuru, the police registered a case against 15 students who staged demonstration outside the college campus.

In his complaint, the principal stated that despite a ban on large gatherings in and around the college, 10 to 15 Muslim girl students of the college staged a demonstration.

The hijab-wearing students were adamant that they should be allowed inside the college with their headscarves.

According to the FIR, the girls also created an atmosphere of fear among other college students and obstructed the daily functioning of the college.

The girls, also violated the High Court interim order and a ban on large gatherings.

At Shiralakoppa in Shivamogga district, 58 students who had refused to remove their hijab and staged a demonstration against the government pre-university college administration were suspended.

They were suspended on Friday and were told that they should not come to the college, a student told reporters. On Saturday too, they came to the college, raised slogans and demanded their right to wear hijab. However, they were not let in.

Despite a government order and the Karnataka High Court’s interim order restricting the students from wearing hijab or saffron scarves inside classrooms, the girls came to schools and colleges wearing the headscarf.

In the SJVP College at Harihar in Davangere district, girls wearing hijab were denied entry. The pupils refused to go inside without the scarf, stressing that it was as important as education and they cannot give up their right.

In Vijay Paramedical College in Belagavi district, students complained to the reporters that a holiday was announced by the institution for an indefinite period due to the hijab issue. “We will not sit without headscarves. Let the college realise how it affects our education. The principal is not listening to us,” a student told the media.

In Ballari, a group of girls were not allowed inside the Sarala Devi College, which has been witnessing protests from the day the controversy erupted and the government had ordered that no one should wear clothes that could disturb peace, harmony and, law and order.

The government college at Gangavathi in Koppal district too faced a similar situation where girls were not allowed inside the college.

In Kudur village in Ramanagara district, some students staged a demonstration on the college ground after they were not allowed to enter the classrooms.

Meanwhile, the pontiff of Jagadguru Murugharajendra Vidyapeetha Swami Dr Shivamurthy Murugha and Moulana Shabeer Ahmed Nadvi of Naasih Foundation appealed for peace and harmony in the educational institutions as well as the society following the hijab row.

“I appeal to everybody to establish peace and social harmony, which is very important. Wearing the type of cloths (Hijab or saffron scarves) is secondary,” the seer said in a joint press conference.

Moulana Nadvi said students of different faith were getting education together but there was no hijab or saffron scarves issue till now.

“The only objective was that the Indian child should become competent by getting good education to serve the motherland. I appeal to everyone not to focus on these things and concentrate on your studies,” the Moulana said.

He also said all the Ulemas (Islamic religious heads) will go through the court order once it comes and then they will come before the media again.

On January 1, six girl students of a college in Udupi attended a press conference held by Campus Front of India (CFI) in the coastal town protesting against the college authorities denying them entry into the classroom by wearing hijab.

This was four days after they had requested the principal permission to wear hijabs in classes which was not allowed. Till then, students used to wear hijab to the campus and entered the classroom after removing the scarves, the college principal Rudre Gowda had said.

“The institution did not have any rule on hijab-wearing as such since no one used to wear it to the classroom in the last 35 years. The students who came with the demand had the backing of outside forces,” Mr Gowda had said.