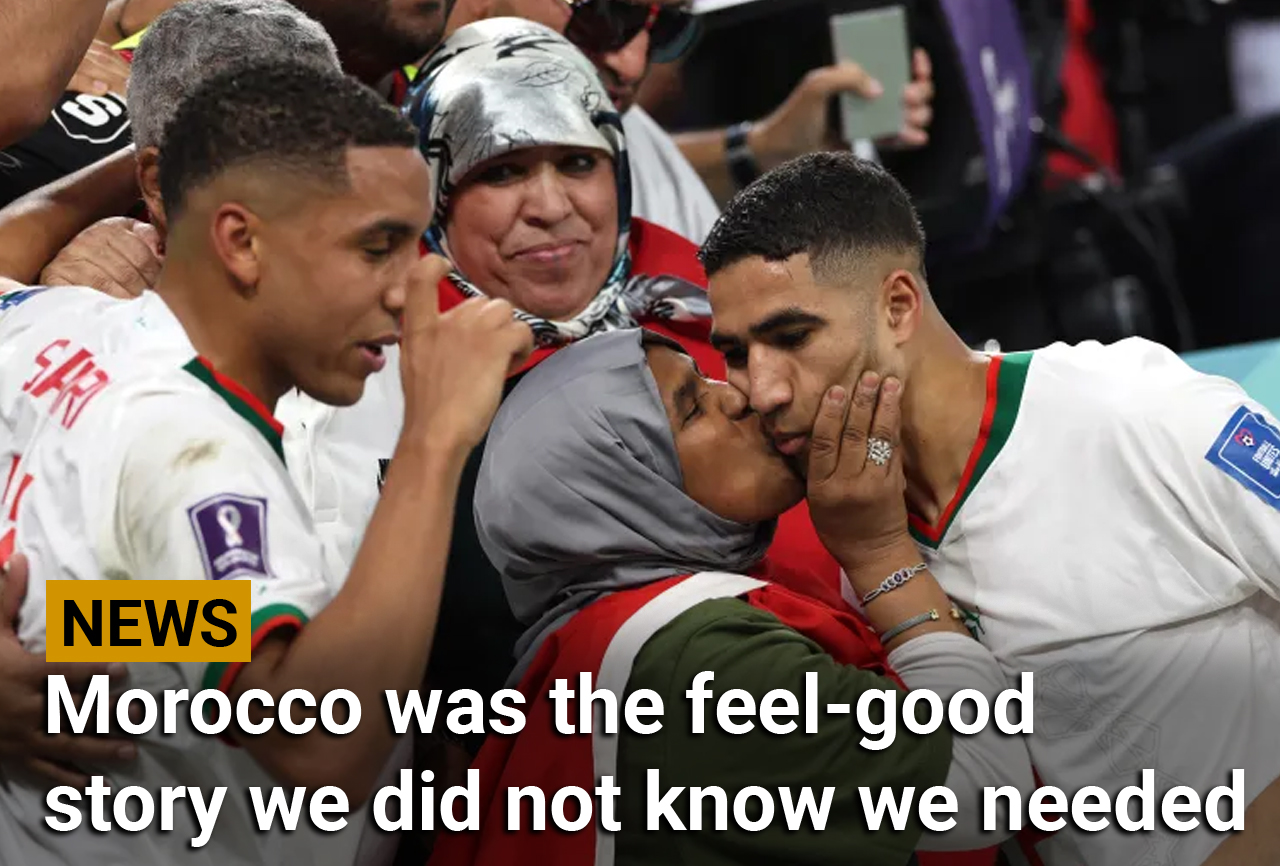 Scenes of players frolicking on the pitch with their mothers were more than enough for me.

As I sat with my family watching the first half of France vs Morocco, a chant from Moroccan fans rumbled through the stadium.

“Are they saying ‘La ilaha il Allah’?” I asked my husband.

They were, in fact, repeating the first half of the Muslim declaration of faith, “There is no God but God,” and a few claps later, the second half: “Muhammad is the messenger of God.” A sort of collective rallying cry to both uplift spirits and express pride in Islam’s central creed among fellow believers.

Our scepticism clearly had not caught up with the mesmerising spectacle that was the Atlas Lions.

It was the winning streak that at least in this region, we could not look away from – the deeply satisfying underdog narrative of this World Cup, most deliciously for Arabs, Africans, the diaspora in the West, and Muslims collectively, rejoicing at an authentic representation of their lived faith and values on display in the most celebratory way.

many Muslims joked that it was only due to the “mother’s ‘dua’ [prayer]” that they were still hanging on.

Others commented that their against-all-odds victories – against Belgium, Spain, Portugal – were a case of feeling more at home at the first World Cup in the Middle East, being in their neck of the woods (or the closest thing to it), and the energy of the fans, that propelled them to keep on keeping on.

No one could deny the electrifying Moroccan fandom that to an outsider seemed to pop up in Qatar overnight. And that is the thing about this story in particular – it was as much about the fans as it was about the players.

When Morocco beat Portugal last week, a colleague turned to me and asked an important editorial question: “So, the first African team to make it to the semis, or the first Arab team?”

My answer did not skip a beat.

“Both. All of it. And then some. Their win means whatever you want it to mean, for you.”

We decided right there and then that our coverage would not delve into the very real identity ping-pong taking place over who gets to claim Morocco.

It is not that these debates are not valid; it is that we simply chose to lean into a moment swirling in optimism and unity.

We also chose a different conversation to spotlight: the power of football as a force for social change.

I spoke to a few people who were merely supporting Morocco in solidarity with the Palestinian cause, as players and fans regularly waved the Palestinian flag. For them, the following message about Palestinians was enough: “They exist. Their struggle is real and felt beyond their homes. They will not be erased.”

It is so much bigger than football.

And the ability of the Atlas Lions to connect so many people from different backgrounds around a common desire to believe in miracles, shift the game when no one saw it coming, in a region ignored by football’s big guns (until now) – was a story worth telling, and one the world needed, however fleeting.