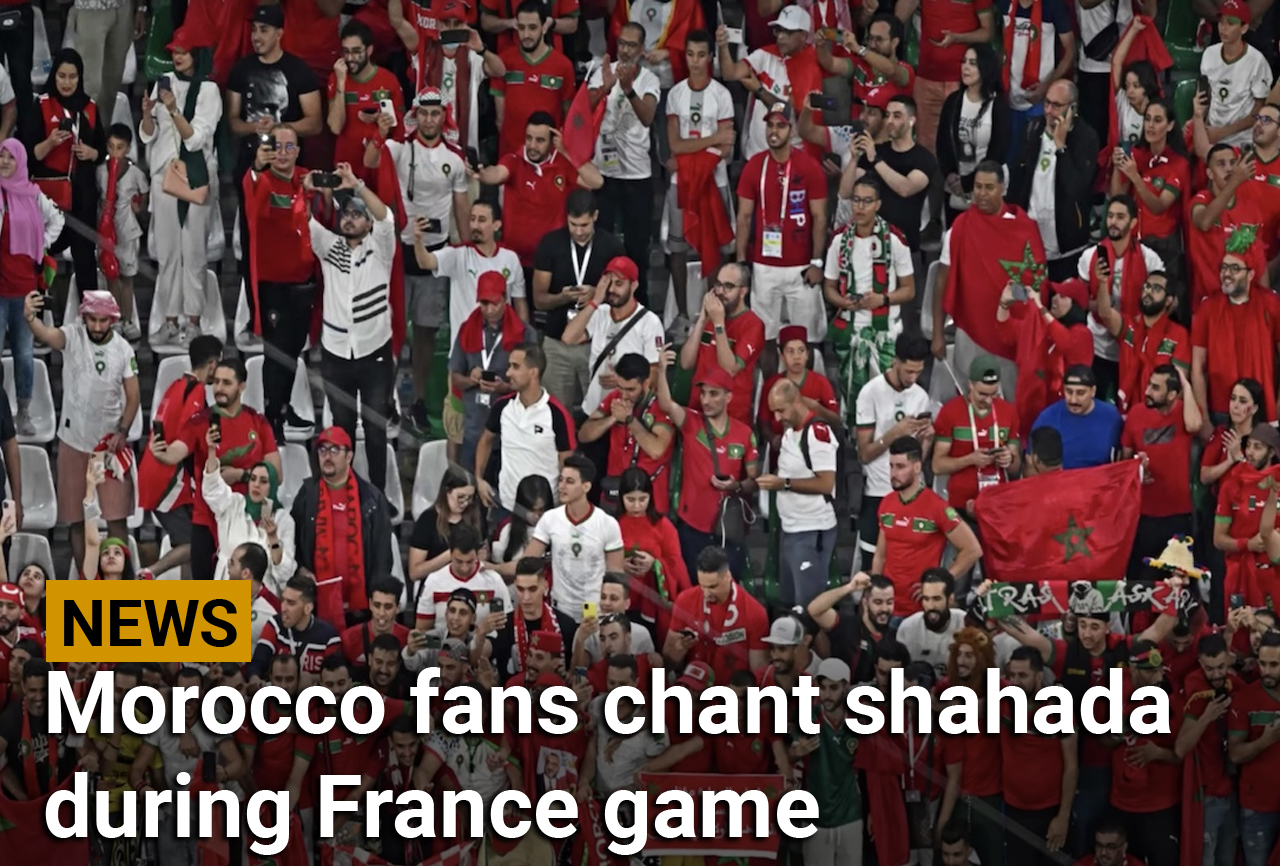 Thousands of Muslim fans attending Morocco versus France match in Qatar recited the Islamic proclamation of faith, or the shahada, on Wednesday.

Thousands of Muslim fans attending Morocco versus France match in Qatar recited the Islamic proclamation of faith, or the shahada, on Wednesday.

“There is no deity but Allah and Muhammad is His messenger” was heard around the stands of the stadium in the Qatari city of Al Khor, as an intense FIFA World Cup match ensued between the two teams.

The incident occurred several times throughout the match after calls by activists to “shake the stadium” with the love of the Prophet Muhammad to deliver a message to the attending French president, Emmanuel Macron.

Macron met with Qatar’s Sheikh Tamim bin Hamad Al Thani earlier in the day and made a pit stop at the traditional Souq Waqif just hours ahead of the game.

On Monday, social media influencer Mahmoud Al Hasanat took to Twitter to urge Muslim fans to join the show of solidarity, saying: “I hope to hear from the Moroccan fans in the France-Morocco match, sending prayers upon the Prophet, may God bless him and grant him peace, as they shake the stands.”

“Dear fellow Moroccans raise your voices, saleew 3la Nabi Mohammed, this coming match against France. Let President Emmanuel Macron & his entourage know that we let nobody insult our beloved Prophet,” she wrote in an Instagram post on Monday.

France has long faced international scrutiny over anti-Arab and Islamophobic sentiment among its politicians and public figures.

French President Macron has himself claimed that Islam is a religion “in crisis” and has presided over Paris’ controversial “anti-separatism” law, which rights groups say has been used to target minorities, particularly Muslims. Under the law, dozens of French mosques have been raided and closed down.

Macron has also staunchly defended xenophobic caricatures produced by the French media, saying France “will not give up cartoons”.

Ahead of the World Cup, Arabs were yet again the targets of the French media, with a dossier published by a controversial newspaper that took aim at Qatar.

Social media users called out the French newspaper Le Canard Enchaîné for brazen racism and Islamophobia after it published a caricature depicting Arabs in football kits as terrorists.

Similar images have been seen before in the French satirical magazine Charlie Hebdo, which has ridiculed the Prophet Muhammad, depicted a black French minister as a monkey and mocked the death of Syrian toddler Aylan Kurdi, among other things.

‘Racist and dangerous’: German anchor under fire for comparing Moroccan players to ‘ISIS’

The Morocco versus France game on Wednesday came as the Atlas Lions also faced as Islamophobia from western media.

The Welt anchor showed an image of three national team players after a successful World Cup game, in which they raised their index fingers.

This is a common gesture for billions of Muslims around the world who praise God by professing the concept of Tawhid, or ‘Oneness’.

However, the anchor likened the players to ISIS, claiming the gesture caused “irritation”.

“This is a greeting that the so-called Islamic State has adopted,” he claimed.

“The fighters often pose with the gesture after conquests. It’s unclear whether the World Cup players from Morocco were aware of the significance of the gesture,” he alleged.

The segment, broadcast to millions, was widely shared online, however social media users were quick to call out the brazen racism targeting the Moroccans.

The outrageous claims were made just days after Die Tageszeitung also criticised the Moroccans for their support of Palestine, calling the raising of the flag at the World Cup as “orchestrated hostility towards Israel”.

The FIFA World Cup Qatar 2022 is the first such time the tournament is being held in a Muslim and Arab nation, with thousands of fans using the opportunity to showcase their support of Palestine. Flags have been raised across fan zones as well as stadiums throughout the tournament.

Arab teams involved in the tournament, especially Morocco, have been bold with their solidarity, celebrating their wins by waving the flag on the pitch.

Fans attending matches told Doha News the historic hosting of the tournament in a Muslim and Arab country for the first time has provided a platform for real solidarity to be shown on a global level.