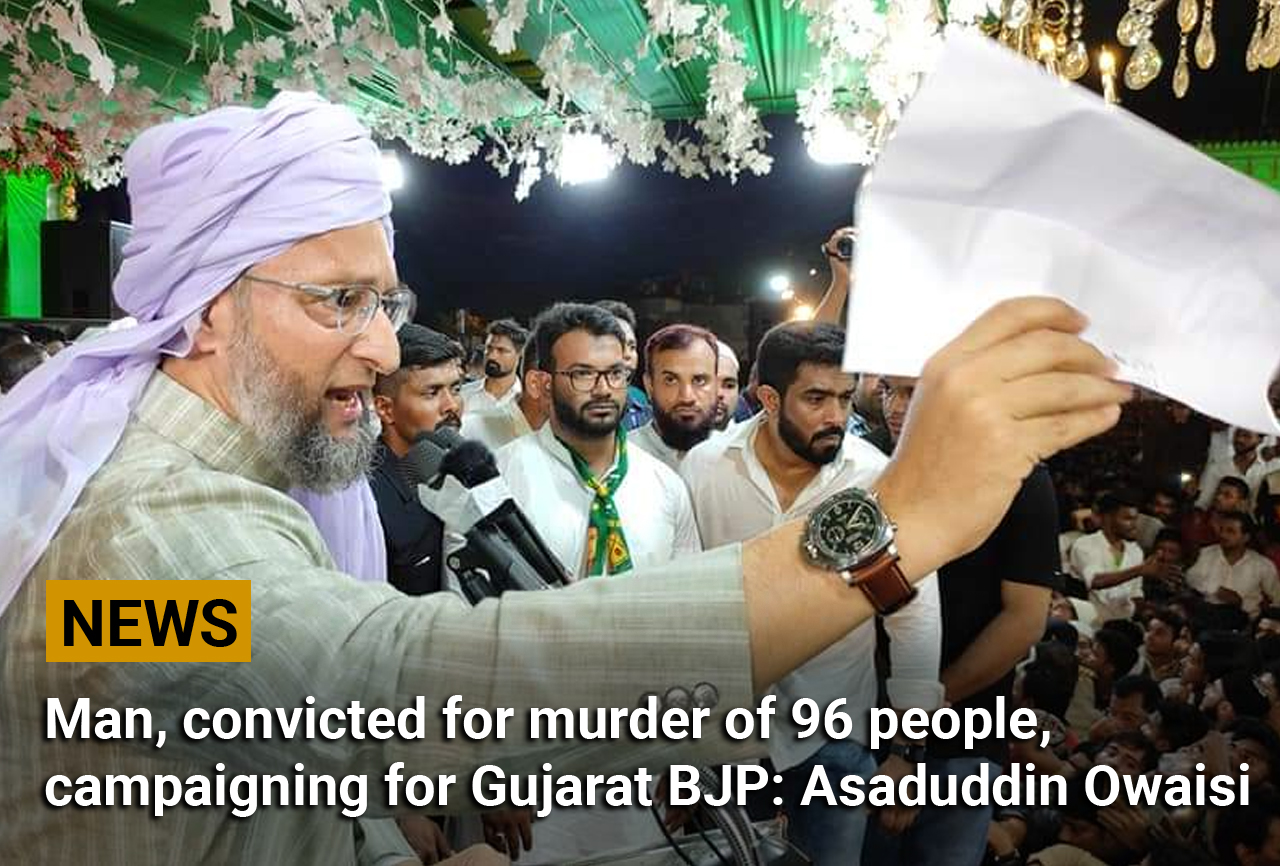 AIMIM chief Asaduddin Owaisi said Saturday the BJP is a party that promotes those linked to genocide convicts in an apparent reference to BJP candidate CK Raulji, who was a part of a panel that granted remission to 11 life-term convicts in the Bilkis Bano case and a Gujarat genocide convict Manoj Kukrani who is active in BJP election campaign.

“BJP in Uttar Pradesh said ‘we’re against criminals’ but what are they doing in Gujarat? The man (Manoj Kukrani) who was sentenced to life imprisonment for the murder of 96 people in Naroda Patiya… he is campaigning for BJP today, working for a BJP candidate,” he said.

“The man (Raulji) who defended Bilkis’ rapists and the murderers of her three-year-old child… who called them ‘sanskari’… he is a BJP candidate. Are they supporting the victims or the accused? This is BJP’s real face,” said Owaisi.

Manoj Kukrani who was sentenced to life imprisonment for his role in the Naroda Patiya massacre case of the 2002 Gujarat Muslim genocide and later granted bail on health grounds, is campaigning for his daughter, Payal Kukrani, a BJP candidate, showed the photographs by NDTV reporter last week.

Pictures showed that Manoj was warmly greeted by Balram Thawani, the sitting BJP MLA from Naroda, and BJP party workers during campaigning.

Manoj, a BJP worker at the time of the genocide, got regular bail in the case in 2016 following his lawyers had submitted that he was “totally bedridden and not in a position to carry out his day-to-day activities, and that his condition was deteriorating day by day and that lastly, he was suspected to be suffering from brain cancer.”

The Naroda Patiya massacre took place on 28 February 2002 at Naroda, in Ahmedabad during the 2002 Gujarat Muslim genocide. 97 Muslims were killed by a mob of approximately 5,000 people, organised by the Bajrang Dal, a wing of the Vishva Hindu Parishad, and allegedly supported by the Bharatiya Janata Party which was in power in Gujarat. The incident was later described as “the largest single case of mass murder.”

“My father has been an experienced politician. I don’t want to comment on my father’s conviction because we have appealed against it in the Supreme Court. We’re still fighting it, but all I can tell you is that my father, mother and all BJP leaders are helping me in my election campaign and we will win on the issue of development,” Payal said to NDTV’s Tanushree Pandey.

Eyewitnesses had testified at the trial that Manoj was part of the Hindutva mob that had poured kerosene on a Muslim woman to burn her alive. The court records also showed that Manoj and others were seen with firearms, which were also later used to burst gas cylinders to destroy entire chawls and houses of Muslims, according to Indian Express. At least nine complaints were registered against Manoj by victims, alleging his’s involvement in the Hindutva mob that torched and gang-raped Muslim women.