Home NEWS Liz Truss resigns as PM, with new leader by next Friday 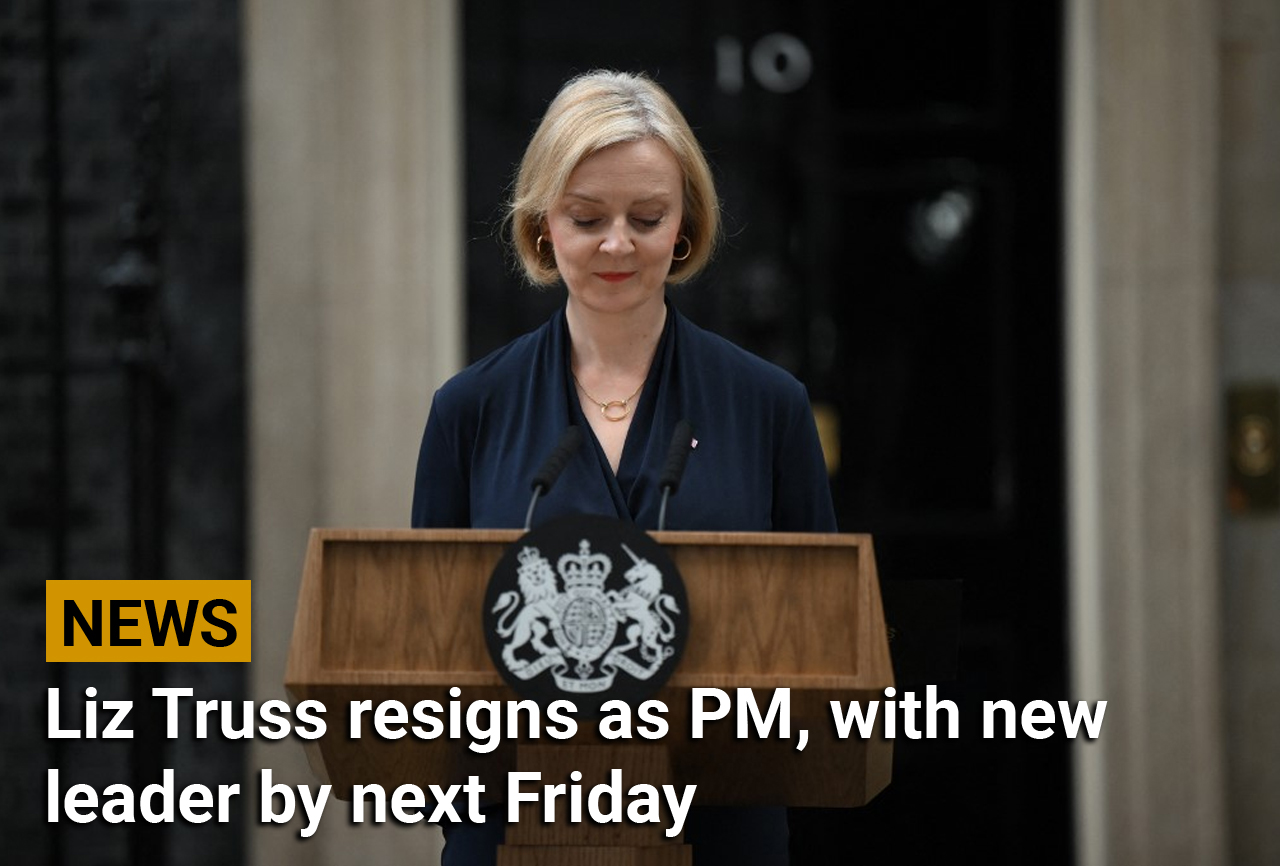 Liz Truss quits: candidates to be prime minister must have at least 100 nominations from Tory MPs.

Sir Graham Brady, chair of the 1922 Committe, is holding a briefing for journalists outside parliament with Jake Berry, the party chairman.

They are taking questions now.

Q: What is your message to the public? And do you want a unity candidate?

Berry says it is up to MPs to decide if there is one or two candidates. If there are two, members will get a choice.

Q: Are you stitching up the rules to keep Boris Johnson off the ballot?

Brady says the threshold for nomination is 100 supporters. That means there could be three candidates, he says.

Tory party could be finished if this leadership election goes wrong, MPs warn

Robert Jenrick, the former communities secretary, has said the Conservative party could “cease to exist” if it messes up this leadership election. In an interview with the News Agent podcast, he said:

This isn’t an ordinary leadership contest. It’s more extraordinary than the one we had in the summer.

If we get this wrong, the country will face a very serious period of further instability and the Conservative arty will lose the next general election, potentially cease to exist.

The Tory MP Mark Garnier said much the same on Radio 4’s PM programme a few minutes ago. He said:

This is an existential moment, I suspect, of the Conservative party. If we don’t come together and recognise our survival relies on us to get together, if we call apart, it could be the end of the party.

The Labour leader Keir Starmer said his party has a manifesto “ready to go” if there is an early election. In an interview with the BBC’s Newscast podcast, he said:

Starmer also said that, if the Tories were to replace Liz Truss with Boris Johnson, that would make the case for an early election even stronger. He explained:

Let’s remember that it was three months ago pretty much that he resigned in disgrace. He resigned because dozens of his frontbench [colleagues] were resigning themselves, saying he was unfit for office …

So if they’re going to go from this experiment, this chaos, this economic damage, [and] wind back three months to a man who was deemed to be unfit for office, I think that only adds insult to injury for the public [who will be] knocking on the door saying, ‘Hang on, why can’t we have a say on this?’

The public clamour for an early election is strong. Almost all the opposition parties are calling for one, as well as organistions like trade unions.

But however ridiculous the idea of the governing party changing leader twice without calling an election may seem, the Tories will not call one when they are so far behind in the polls. And the only mechanism available for forcing one is for the opposition to call a no confidence vote which the government loses. That is not likely either.

High threshold shouldn’t be an issue for ‘serious candidates’ – Brady

Taking questions from the press, Sir Graham Brady says a “high threshold” of 100 nominations has been agreed to make the process of replacing Liz Truss as quick as possible.

“It should be achievable by any serious candidate, who has a realistic prospect of going through,” he says.

There will be a private hustings after nominations close

Jake Berry doesn’t go into details about the online system, but he says it will be secure, adding that all efforts will be made to include those who don’t have access to vote online.

Sir Graham Brady adds there will be a hustings on Monday once nominations close and this will be behind closed doors.

Everything will be concluded by 28 October – Tory chairman

Tory Party chairman Jake Berry is now speaking, he says if there are two candidates then there will be an expedited online vote for Tory Party members.

Everything will be concluded by 28 October, he says adding that Conservative Party HQ will work to make one broadcast event available.

Sir Graham Brady has announced that nominations for the new Tory leadership contest “are now open”.

They’ll close at 2pm on Monday, he adds.

Speaking outside Parliament, he says candidates will be expected to have “at least 100” MPs backing them to progress to the next stage.

Sir Graham Brady to give statement on leadership contest

We are expecting Sir Graham Brady, chair of the 1922 Committee, to make a statement outside of Parliament shortly.

The senior Tory MP will set out the rules and the thresholds needed for candidates to take part in the Conservative Party leadership contest announced today, following Liz Truss’s resignation.

Things could get messier still if Johnson stands

I’m told by senior Conservatives that there are MPs talking about triggering by-elections if Boris Johnson is serious about standing to be leader again.

I’ve heard from MPs tempted to themselves, and gathering evidence of defections and resignations in the event of his return.

Labour has a manifesto ready to go for when there’s a general election and a return of Boris Johnson would “add insult to injury for the public”, Sir Keir Starmer has told the the BBC Newscast podcast.

The leader of the opposition said: “There’s a manifesto that is going to be ready whenever an election is called.”

Asked whether he wouldn’t mind facing Boris Johnson again, Sir Keir said: “No. I share the view that he was unfit for office.”

“So if they’re going to go from this experiment, this chaos, this economic damage, [and] wind back three months to a man who was deemed to be unfit for office, I think that only adds insult to injury for the public [who will be] knocking on the door saying, ‘Hang on, why can’t we have a say on this?'”

Tim Loughton, a former minister, told Radio 4’s PM programme that he wanted Rishi Sunak, Penny Mordaunt, Jeremy Hunt and Ben Wallace – whom he described as the four “big beasts” in the party – to form an alliance and agree who should be prime minister. He said:

If those four people can come together and agree as to which one of them is going to be the prime minister candidate, then we won’t have to have an election, and then it’s incumbent on all of my parliamentary colleagues to weigh in behind them, and we can get back to some degree of normality.

When asked if that would be acceptable to rightwingers like Suella Braverman, who wants to stand herself, Loughton replied:

People need to park all those egos. They need to put aside all the baggage and all the prejudices they might have had about certain candidates in the past. This is a really urgent situation, urgent for the Conservative party, or parliament, most importantly for the country. We need to have a united and talented cabinet of grown-ups who come together and get us back on course.

This may have been what Theresa May meant with her “compromise” message to Tory MPs.