Home NEWS Lionel Messi in numbers: After 793 goals and seven Ballon d’Ors – his World Cup win cements his spot as one of the world’s greatest footballers 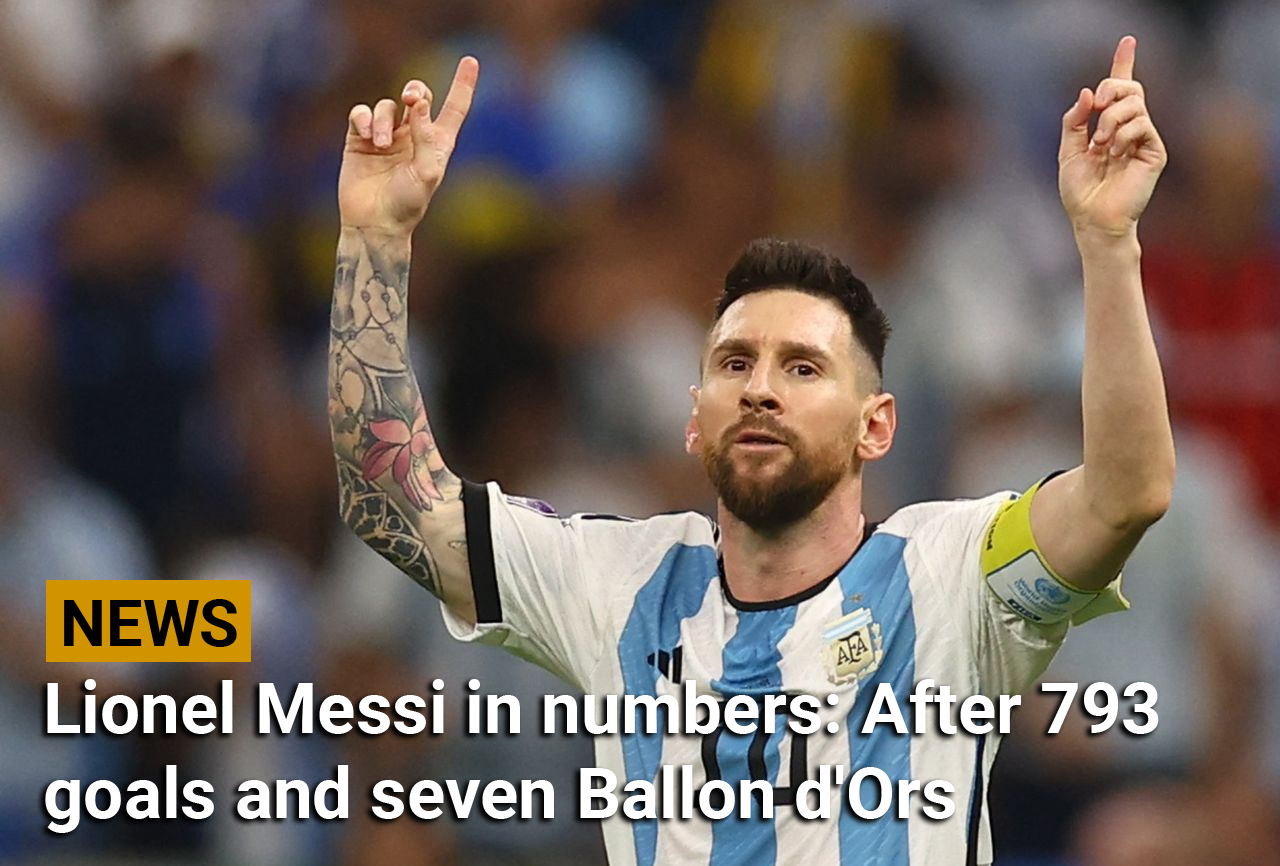 The legendary Argentinian forward led his side to victory against France in the 2022 World Cup Final on Sunday.

With an astonishing 793 goals for club and country, 42 team titles and a record seven Ballon d’Ors to his name, Lionel Messi has already secured his status as a true footballing great.

But on Sunday, the legendary Argentinian star scored two goals and the first of five penalties in the shoot out, to win his team the World Cup.

The 35-year-old finally secured the one trophy that has so far eluded him – the biggest of them all.

The win adds to his already exhaustive trophy cabinet and simultaneously ended 36 years of hurt for Argentina, who last won the tournament in 1986 thanks to another La Albiceleste legend, Diego Maradona.

For many, the World Cup victory also cements Messi’s status as the greatest footballer to ever grace the planet after years of debate between fans of his and Cristiano Ronaldo.

Born to a steel factory manager father and a mother who worked in a magnet manufacturing workshop, Messi grew up in a football-loving family in the central Argentinian city of Rosario, to the northwest of Buenos Aires.

As a child, he was constantly playing football with his older brothers Rodrigo and Matias, as well as his cousins Maximiliano and Emanuel Biancucchi, both of whom went on to become professional footballers.javascript:”<html><head><script src=’https://securepubads.g.doubleclick.net/tag/js/gpt.js’ async></script></head><body><div id=’proper-ad-skynews_signal_300x250_1′></div></body></html>”Advertisement

He began playing in a team aged four, before joining local club Newell’s Old Boys at the age of six, where he showed his goalscoring prowess with almost 500 goals in a youth team nicknamed “The Machine of ’87”.

But it was later discovered that a young Messi had a growth hormone deficiency, a condition which threatened his future career.

His father initially used his own health insurance to cover the $1,000-a-month treatment, which involved Messi injecting hormones into his legs each night.

After the insurance coverage for the treatment ended, Messi’s father asked Newell to contribute.

However the club, owing in part to the country’s difficult economic situation at the time, declined to fully fund the treatment.

13 – The age Messi signed for Barcelona

Messi’s father looked further a field, to Spain, for a club he hoped would help fund his son’s hormone treatment, leading to trials with Barcelona.

After initial hesitation from the La Liga side, the club’s first team director Charly Rexach, with no paper to hand, offered Messi’s family a contract on a napkin.

Messi would complete his growth hormone treatment at the age of 14 and then, after approval from Spain’s football federation, join Barcelona’s famed La Masia youth academy.

He became part of Barcelona’s greatest-ever youth side, scoring 36 goals in 30 games and helping guide his team to an unprecedented league and cup treble.

After dominating in the youth leagues, Messi, a diminutive 5ft 7in forward with a low centre of balance, excellent ball control and a brilliant left foot, was given his first team debut at the age of 16 in a friendly game.

His first professional debut came at the age of 17 and three months, the youngest Barcelona player ever, in a game against Espanyol in October 2004.

That season he played 244 minutes in nine matches, scoring his debut goal against Albacete in May 2005.

In August of that year, he made his debut for Argentina, in a 2-1 win over Hungary.

Across 1,002 professional games for club and country, Messi has a staggering return of 793 goals.

Though there is much debate, due to a lack of official records and whether to include goals scored in friendly matches, according to the International Federation of Football History and Statistics, Messi is only behind arch-rival Cristiano Ronaldo in the all-time goalscoring charts.

Messi holds a number of records for goalscoring, including being Barcelona (627) and Argentina’s (98) all-time leading goalscorer.

He also holds the world record for the most goals (71) in a single season, beating legendary German striker Gerd Muller’s previous record of 67.

Messi has 13 World Cup goals so far in his career, across five tournaments, and is the only player in history to score a World Cup goal in his teens, his 20s and his 30s.

42 – The number of titles Messi has won

With 41 club and international titles to his name before, the World Cup win makes Messi the joint-most decorated footballer in history with his former teammate, Brazilian right-back Dani Alves.

He also lifted the Club World Cup and the European Super Cup three times each.

For Argentina, he has won nearly every major international competition, with the World Cup the only one to so far elude him, including the Copa America, the Finalissima and an Olympic Gold Medal.

He has one Ligue 1 title with his current club, Paris Saint-Germain.

49 – The number of individual honours Messi has won *so far

Alongside club and international honours, Messi also has a mass of individual awards, including a record seven Ballon d’Or trophies, the last in 2021.

He also has nine La Liga Most Valuable Player (MVP) awards and the 2014 World Cup Golden Ball Award – a tournament in which his Argentina side lost in the final to Germany.

Messi also has six European Golden Shoe awards and an MVP trophy for the 2021 Copa America, in which he was instrumental in guiding Argentina to success.

The pair have been together since they were 20.

Like Messi, Roccuzzo is from the Argentinian city of Rosario, where they married in 2017.