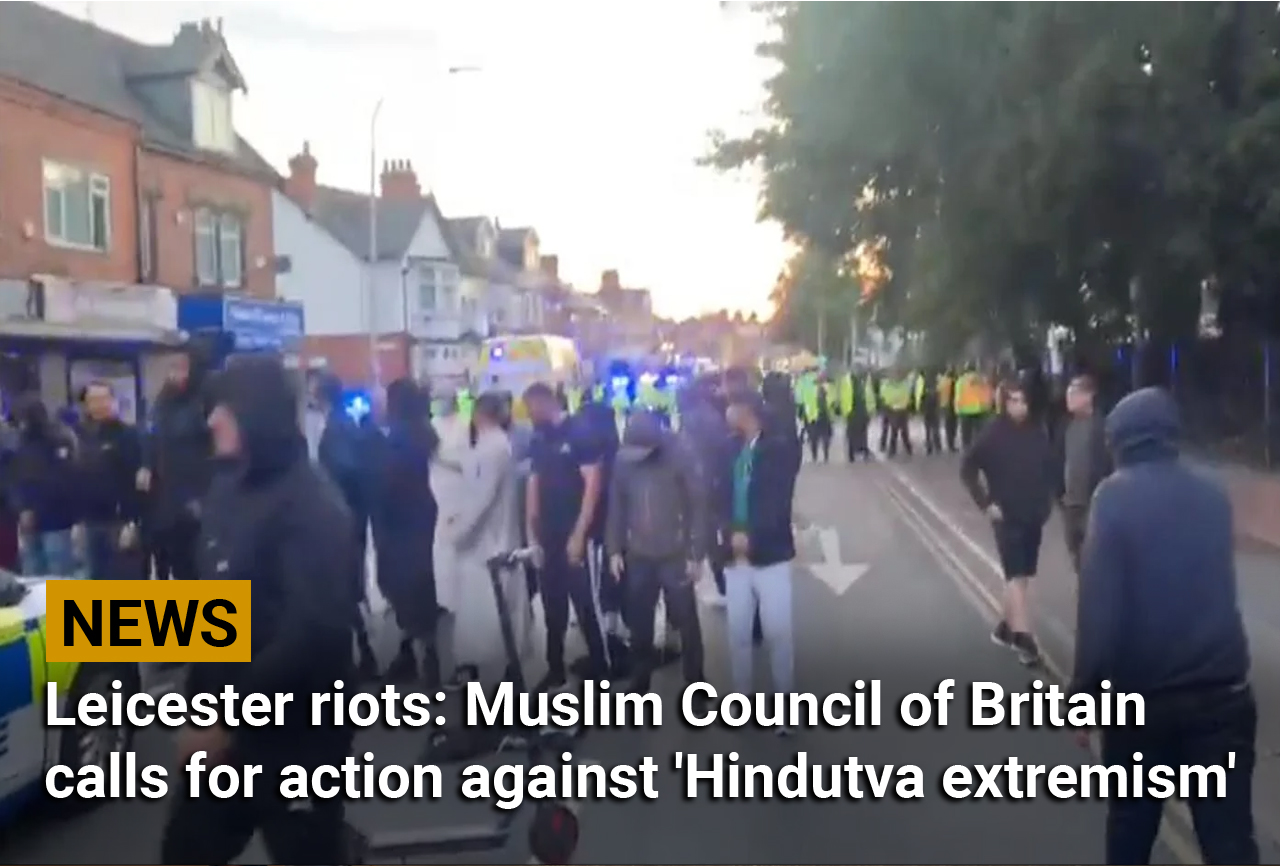 MCB says latest confrontations in the city follow a series of provocations, including chanting outside mosques and mob attacks on Muslims

The Muslim Council of Britain (MCB) on Monday condemned what it described as “the targeting of Muslim communities in Leicester by far-right Hindutva groups”.

Hindutva refers to the Hindu nationalist ideology promoted by India’s ruling Bharatiya Janata Party (BJP), which has been accused of stoking violence and hate crimes against Muslims and other minorities.

The statement comes after police were deployed onto the streets of the English city following weekend confrontations between crowds of young men primarily from Hindu and Muslim communities.

Witnesses, supported by videos circulating on social media, have said they saw hundreds of men wearing masks and balaclavas chanting “Jai Shri Ram”, which translates from Hindi to “hail Lord Ram” or “victory to Lord Ram”, words that have increasingly been appropriated by perpetrators of anti-Muslim violence in India.

“This follows a series of provocations, including: chanting outside mosques, targeted mob attacks on Muslims, and vandalism to homes and businesses over recent months,” the MCB said.

“Groups of young people from both communities have subsequently come out on the streets to protest, resulting in physical altercations and running battles.”

Various Sikh groups and community figures in the UK have also raised concerns about growing Hindutva violence in the country.

On Monday, Leicester police said that so far a total of 47 arrests had been made in relation to the unrest.

“Some of those arrested were from outside of the city, including some people from Birmingham,” it said.

The weekend’s unrest was the latest in a series of street disturbances in the area.

Leicester is one of the most diverse cities in the UK, with people who identify as British Indians, both Hindu and Muslim, making up more than a quarter of the total population of 329,000, according to figures from the 2011 UK census.

“There is now a concern of this toxic brand of extremism, imported from India, spreading to other cities,” the MCB said, citing what it said was “criticism locally of the perceived inaction of law enforcement officers, who failed to disperse the mobs, despite long-standing concerns being raised.”

Leicester riots: Are Muslims ever allowed to be victims in UK media?Faisal Hanif

On Tuesday, the Pakistan High Commission in London also voiced concerns over the violence, saying it “strongly condemned the systematic campaign of violence and intimidation that has been unleashed against the Muslims of the area”.

In a statement on Monday, the High Commission of India in London said: “We strongly condemn the violence perpetrated against the Indian community in Leicester and vandalization of premises and symbols of Hindu religion.

“We have strongly taken up the matter with the UK authorities and have sought immediate action against those involved in the attacks.”

MCB Secretary-General Zara Mohammed said: “Communities have expressed their deep concerns to me around the propaganda perpetuated by far-right groups in India and their Hindutva agenda, which we are now seeing expressed on British streets.

“We do not believe these people represent the views of wider Hindu communities, with whom Muslims and Sikhs, among others, enjoy good relations in the UK, of which Leicester, historically, is a prime example.

“We condemn attacks against any place of worship or symbols of religion – hatred of any kind has no place in our society.”