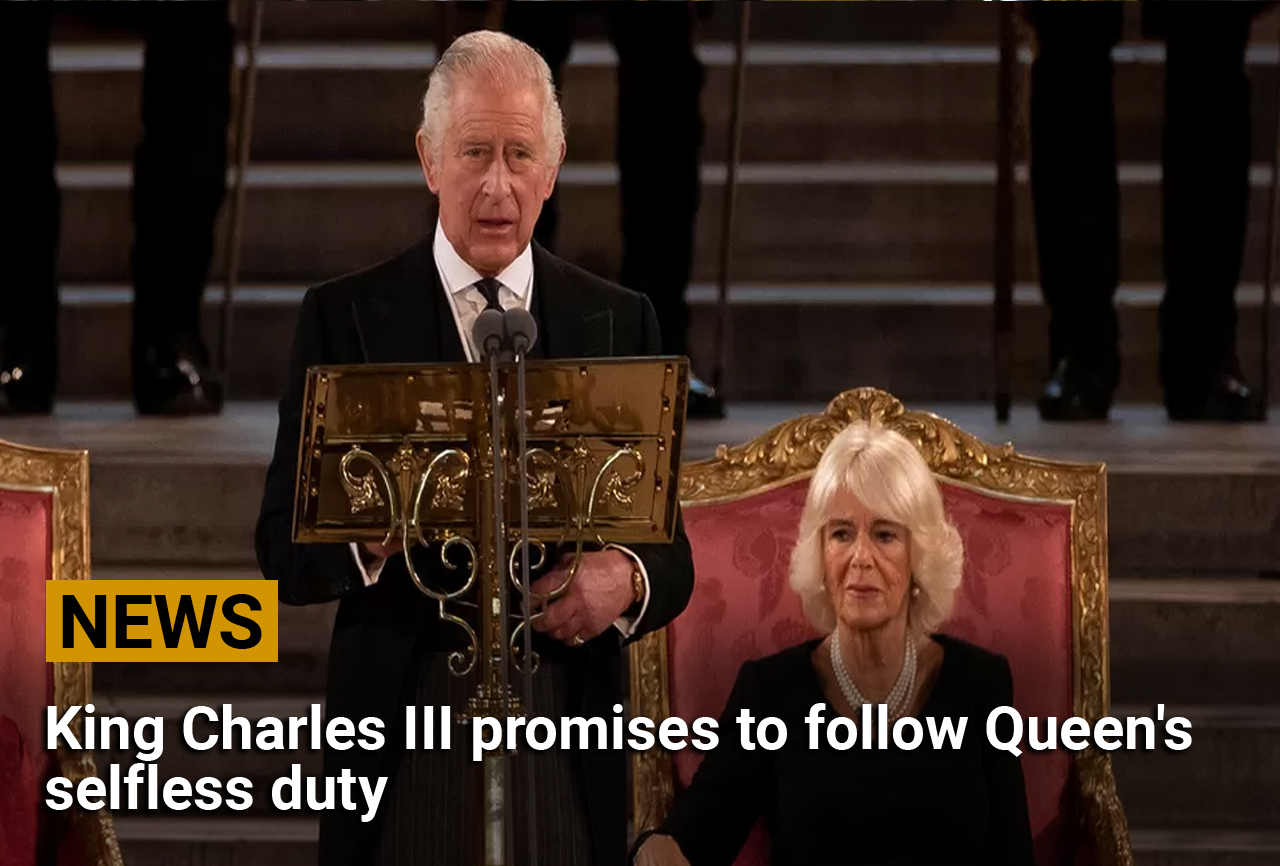 King Charles III promised to follow the late Queen’s “selfless duty” in his first address to both Houses of Parliament as monarch.

The King said Parliament was the “living and breathing instrument of our democracy” as he spoke in front of 900 MPs and peers at Westminster Hall.

It followed condolences from speakers of the House of Commons and Lords.

Sir Lindsay Hoyle, House of Commons speaker, said “as deep as our grief is, we know yours is deeper”.

Addressing the King on behalf of MPs, Sir Lindsay added: “We know you hold the greatest respect, the precious traditions, the freedoms, and responsibilities of our unique history and our system of parliamentary government.

“We know that you will bear those responsibilities which fall to you with the fortitude, dignity, demonstrated by Her late Majesty.”

The King, in his response, said: “While very young, Her Late Majesty pledged herself to serve her country and her people and to maintain the precious principles of constitutional government which lie at the heart of our nation. This vow she kept with unsurpassed devotion.

“She set an example of selfless duty which, with God’s help and your counsels, I am resolved faithfully to follow.”

State trumpeters played a fanfare as King Charles made his way through Westminster Hall at 10:25 BST while the Royal Standard was raised in place of

Built in 1097, Westminster Hall has played a significant role in British history across the centuries.

“I cannot help but feel the weight of history which surrounds us and which reminds us of the vital parliamentary traditions to which members of both houses dedicate yourselves, with such personal commitment for the betterment of us all,” the King said in his address.

“Parliament is the living and breathing instrument of our democracy. That your traditions are ancient we see in the construction of this great hall and the reminders of medieval predecessors of the office to which I have been called.”

At the ceremony – which took place in the same hall where the Queen’s coffin will lie in state later this week – the monarch, accompanied by Camilla, Queen Consort, were offered condolences on behalf of both Houses of Parliament.

Lord McFall paid tribute to the late Queen and said she “captured the imagination of peoples across the globe”.

“We remember her commitment, her kindness, her humour, her courage and her fortitude as well as the deep faith which was the anchor in her life,” he added.

“We are proud and humbled to welcome you as King.”

Also among the attendees in the hall was Ugbana Oyet, the first black sergeant at arms in the role’s history.

Monday’s visit to Westminster also saw members of both houses pledging loyalty to the new monarch.

What an extraordinary ceremony to witness.

A home of history, it hosted Henry VIII’s Coronation Banquet in 1509.

Today, in front of me, row upon row of blue chairs, upon them an audience of around 900 in black.

During the addresses, a sea of expressionless, thoughtful, contemplative faces.

The Queen Consort looked straight ahead.

Afterwards, the King managed a few smiles as he acknowledged various familiar faces in the congregation.

After the ceremony, the King and Queen Consort travelled to Edinburgh, the city where the Queen’s coffin has been lying-in-rest since Sunday.

There, they were greeted by large crowds before they continued on to the Palace of Holyroodhouse for the Ceremony of Keys.

One well-wisher among the crowd outside the palace thanked the King and the Queen Consort for the UK’s support for Ukraine during the nation’s conflict with Russia.

The ceremony at Holyroodhouse will be followed by a procession along the Royal Mile to St Giles’ Cathedral. The trip will mark the start of a royal tour of all four nations of the UK.

The King will lead members of the Royal Family – expected to include the Queen’s other children the Princess Royal, Earl of Wessex and Duke of York – as they walk behind the Queen’s coffin.

At the cathedral, the Royal Family will be joined by a congregation drawn from all areas of Scottish society to attend a service of thanksgiving for her life.

Later in the evening, the King and his family will observe a vigil at the cathedral in honour of the Queen.

Her coffin will remain at the cathedral for 24 hours for members of the public to pay their respects, before being flown back to RAF Northolt and then travelling on to Buckingham Palace.

Before that, the King will return to the Palace of Holyroodhouse for an audience with Scotland’s First Minister Nicola Sturgeon.

He and the Queen Consort will then attend the Scottish Parliament, where members will deliver a motion of condolence at 17:30 BST.

Since the Queen died at Balmoral on Thursday, thousands of mourners have laid flowers and tributes at places she lived, including Buckingham Palace, Sandringham House and Windsor Castle.

More than 750,000 could file past the Queen’s coffin in Westminster Hall during her lying-in-state later this week. Mourners wishing to do so have been warned queues could reach 20 hours.

The last member of the Royal Family to lie in state in the hall, the oldest part of the Palace of Westminster, was the Queen Mother in 2002 when more than 200,000 people queued to view her coffin.

Sir Peter Bottomley, father of the House of Commons, said he expected “we’ll see 10 times more than that” this week.

He told BBC Radio 4’s Today programme: “It is a magnificent opportunity for people to come through Westminster Hall and actually feel the modernity of the monarchy and the tradition.”

Sir Peter said the events of the past few days showed how in the space of a week you can change the head of state and the prime minister and have people taking to the streets “with love and flowers”.

The lying-in-state begins at 17:00 BST on Wednesday and will last until 06:30 on Monday 19 September – the day of the Queen’s funeral at Westminster Abbey.

Members of the public have been invited to take part in a minute’s silence at 20:00 BST on Sunday, the evening before the funeral.

“The silence can be marked privately at home on your own or with friends and neighbours, out on your doorstep or street with neighbours, or at any locally arranged, community events and vigils,” a spokesperson for No 10 said.