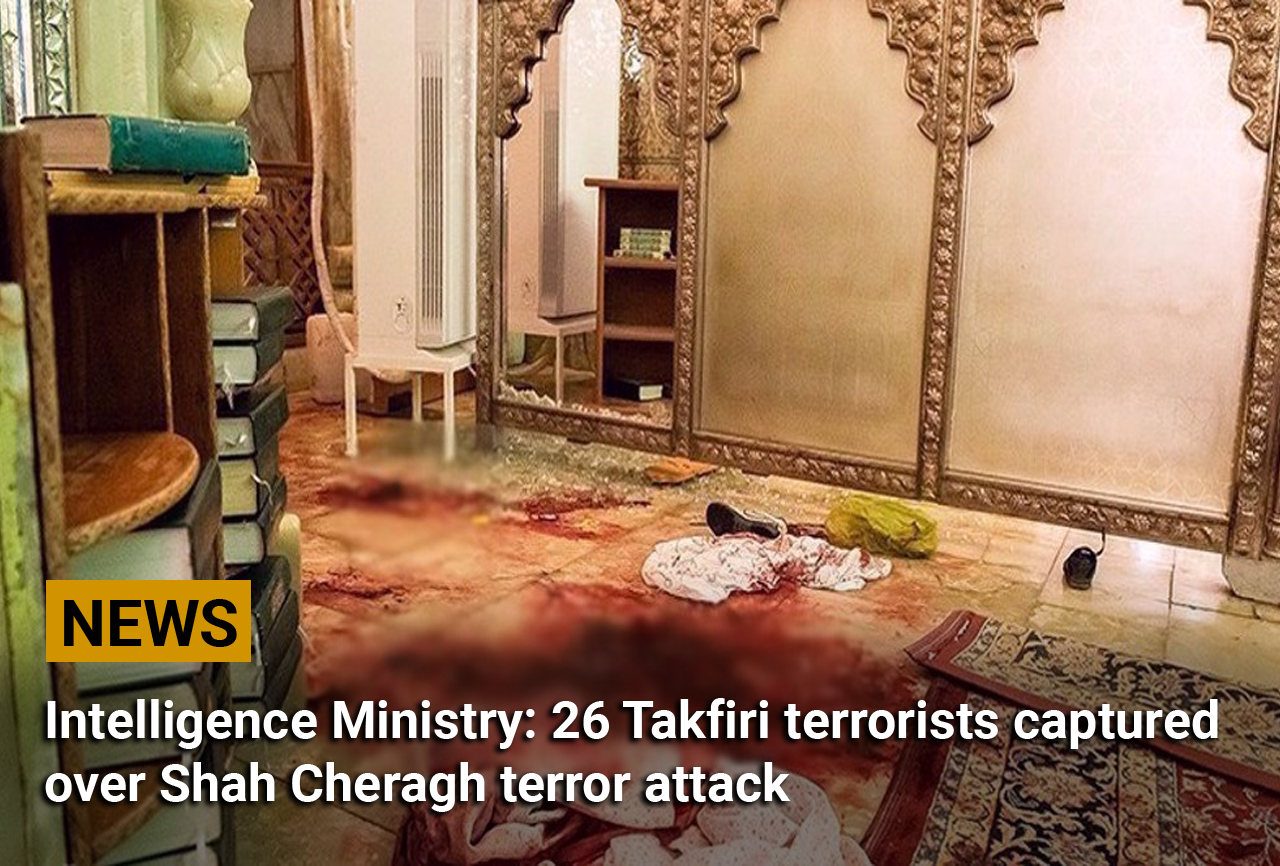 The Iranian Intelligence Ministry says the country’s security and intelligence forces have arrested 26 Takfiri terrorists for involvement in a recent terrorist attack on the Shah Cheragh shrine in the southern province of Fars, adding that the main coordinator of the deadly indecent was a citizen of the Republic of Azerbaijan.

The ministry, in a statement released on Monday, announced that authorities launched rigorous and round-the-clock intelligence, counter-intelligence and security operations soon after the attack and managed to identify and capture all those behind the bloody act of terror.

The statement said that the detainees are nationals of the Republic of Azerbaijan, Tajikistan and Afghanistan, and none of them are Iranians.

It further noted that the terrorist who played the main role of coordinating the terror attack is an Azerbaijani national who entered Iran via Imam Khomeini International Airport, southwest of Tehran, en route from Heydar Aliyev International Airport in the Azerbaijani capital city of Baku.Iranians attend huge funeral for victims of terror attack in ShirazTens of thousands of people have taken part in the funeral procession of the victims of a terrorist attack on the holy shrine of Shah Cheragh in Iran’s southern city of Shiraz.

According to the statement, he immediately informed a collaborator in Azerbaijan of his arrival in Tehran and then contacted a network of foreign members of the notorious Daesh Takfiri terrorist group in Afghanistan, better known as Daesh in Khorasan Province, and told them that he was in Iran.

The Iranian Intelligence Ministry said the Takfiri terrorists were arrested in the capital province of Tehran, the central province of Alborz and Qom, the southern provinces of Fars and Kerman as well as the northeastern province of Khorasan Razavi. Some of them were captured while attempting to flee Iran through eastern neighbors.

The ministry pointed out that some of the detainees were even plotting to carry out acts of terror in other Iranian cities, including in the southeastern city of Zahedan.

The attacker opened fire indiscriminately on visitors within the shrine, according to the police commander of Fars province. The perpetrator was wounded and taken into custody by security personnel. He later succumbed to his wounds.

Soon afterward, Daesh claimed responsibility for the act of terror.

Leader of the Islamic Revolution Ayatollah Seyyed Ali Khamenei and other Iranian officials have offered condolences to the Iranian nation, assuring that the perpetrators of the “outrageous” crime will definitely face punishment.