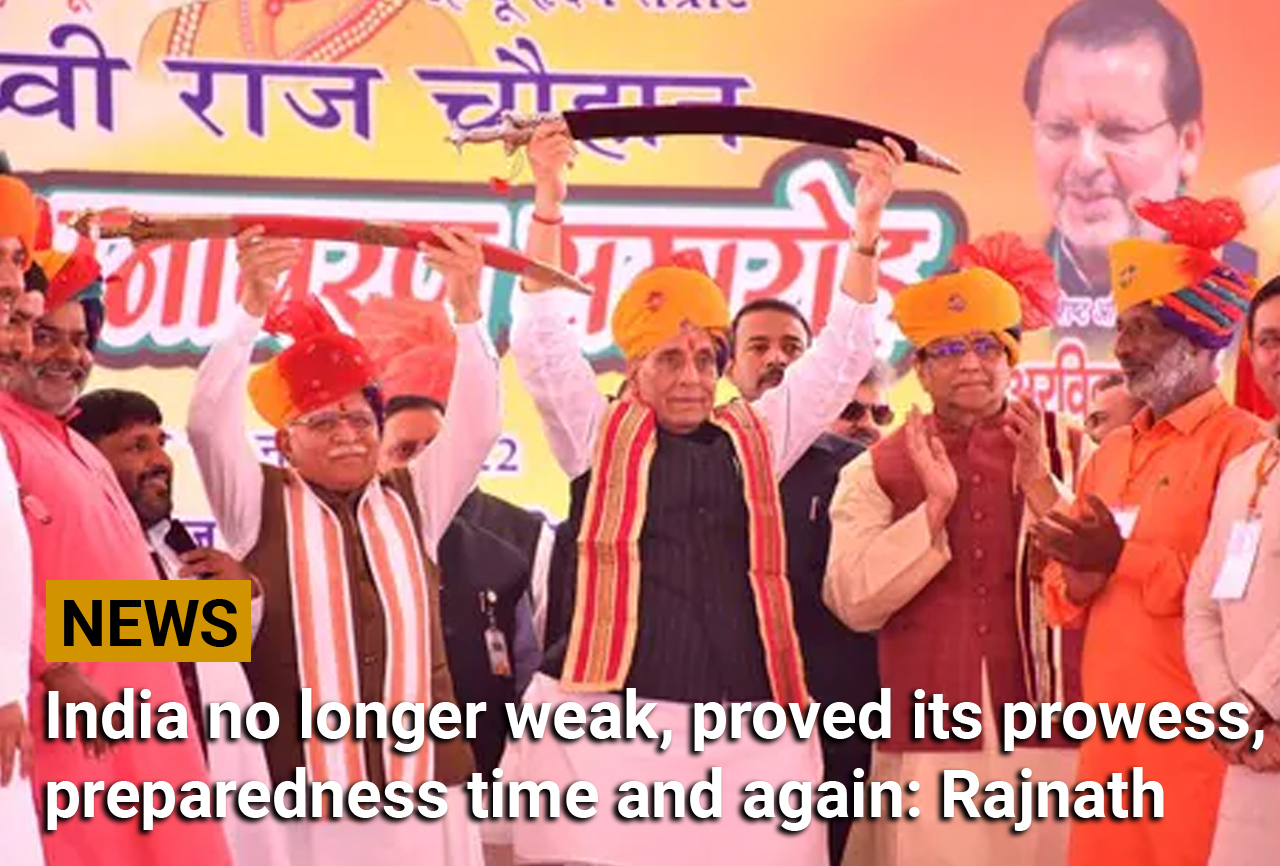 India is not weak anymore and will give a befitting reply if provoked, defence minister Rajnath Singh said on Sunday, asserting that the country has proved its prowess and preparedness time and again.

Speaking at Kulana village in Jhajjar after unveiling the statue of Prithviraj Chauhan, Singh said that safeguarding national interest is the main focus of the Union government led by Prime Minister Narendra Modi and the military is being armed with state-of-the-art and indigenously-developed weapons to protect the country from future challenges.

“India is no longer weak. We believe in peace, but if anyone tries to harm us, we will give a befitting reply. Our soldiers have proved this time and again. 2016 surgical strikes, 2019 Balakot airstrikes and the bravery shown by our soldiers during the Galwan Valley incident are proof of our prowess and preparedness,” said Singh.

Reacting to the controversy surrounding the G-20 logo, Singh said that lotus is the national flower, connected with India’s cultural identity.

Since its launch by Prime Minister Modi for India’s G20 presidency in 2023 on Tuesday, the logo has been receiving constant backlash, including the lotus embedded on it.

“They are debating around the logo of the G20 Summit and are alleging that the prime minister has embossed the symbol of his party on it. Have they forgotten about freedom fighters who in 1857 had a roti (chapati) in their one hand and a lotus in another?” Singh said.

“Despite the fact that the lotus is our national flower, should we forget our culture just because it is our party’s logo as well,” Singh added.

Commending Prime Minister Modi for transforming India’s global image, the defence minister said that the world now keenly listens to New Delhi and hoped that the country will be among the top three economies in future.

Singh said that to get rid of the colonial mindset, the Union government has taken a number of initiatives including renaming of Rajpath as Kartavya Path; installation of a grand statue of Netaji Subhas Chandra Bose at India Gate; a new Indian Navy ensign inspired from Maratha warrior Chhatrapati Shivaji and abolition of around 1,500 obsolete British-era laws.

Haryana a land of brave: Singh

Defence minister Singh said that Haryana is a land of brave and an inspiration of sacrifice.

“In every village of Haryana, remarkable stories of valour and pride of our soldiers can be heard. Our soldiers are protecting the borders of the country. The great history of Haryana is thought to have served as an example for others both in the country and abroad. The statues of great brave sons like Prithviraj Chauhan and Rao Tula Ram teach us to move forward in life,” he said.

Singh said that the feasibility of Sainik School in the Matanhail village in Jhajjar will be examined, and necessary action will be taken in this regard.

The defence minister said that chief minister Manohar Lal Khattar has done commendable work for the development of Haryana.

“Such a chief minister with ‘Sant Pravritti’, who strenuously works for the upliftment of people and society is rare. No one can doubt his integrity. He has ensured to provide a government that is without fear and corruption,” Singh said.

On the occasion, chief minister Khattar said that Prithviraj Chauhan has a remarkable history and all should draw inspiration from his life, bravery, and selflessness and ensure to spread his message among the youth.

“Our government has taken initiative to remember and spread the message of great men by implementing the ‘Sant Mahapurush Vichar Prasar Yojana’. We are only 2 percent of the country’s population but still every tenth soldier belongs from Haryana in the army,” Khattar added.

He said that the financial issue of Rajput Sabha Jhajjar will be resolved and announced ₹ 21 lakh for the building.

“ ₹100 crores each will be allocated for various projects under the public works department and new panchayats. Sectors 6 and 9 of Jhajjar city under the Haryana Shehri Vikas Pradhikaran will be developed and the problem of water logging in the area will be resolved,” CM added.

UN tells Taliban: No recognition without respect for human rights