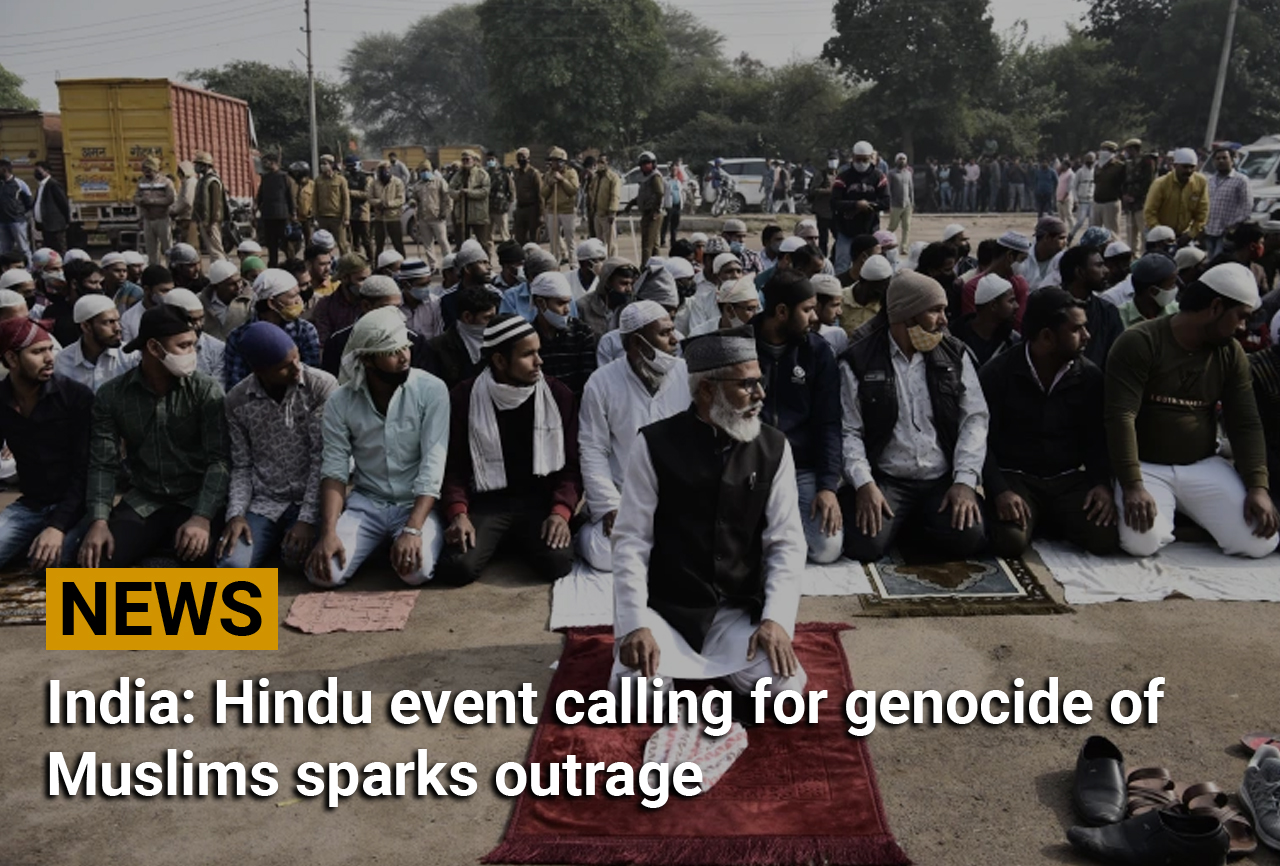 Police file case after videos go viral on social media of a meeting in which Hindu religious leaders called for mass killings and use of weapons against Muslims.

Videos showing Hindu religious leaders in India calling for genocide against Muslims have sparked outrage and prompted demands for action.

Indian police said on Friday they had launched a hate-speech investigation into last week’s event in Haridwar, in northern Uttarakhand state, in which participants called for the mass killings and use of weapons against Muslims.

A speaker at the gathering told the crowd that people should not worry about going to jail for killing Muslims, according to a video that went viral.

“Even if just a hundred of us become soldiers and kill two million of them, we will be victorious … If you stand with this attitude only then will you able to protect ‘sanatana dharma’ [an absolute form of Hinduism],” the woman said.

The meeting was attended by at least one member of Prime Minister Narendra Modi’s Bharatiya Janata Party (BJP). The party stands accused of encouraging the persecution of Muslims and other minorities by hardline Hindu nationalists since coming to power in 2014, allegations it denies.

Prominent Muslim MP Asaduddin Owaisi tweeted that the inflammatory comments in the video were a “clear case of incitement to genocide”.

Modi’s government has not commented on the event.

The woman reportedly added that Indians should “pray to Nathuram Godse”, the Hindu hardliner who assassinated Indian independence icon Mahatma Gandhi in 1948.

Another delegate, Prabodhanand Giri – the head of a hardline Hindu group who is often photographed with senior BJP members – called for a “cleansing” and for those present to be “ready to die or kill”.

“Like Myanmar, the police, politicians, the army and every Hindu in India must pick up weapons and do this cleansing. There is no other option left,” he is heard to say.

A military crackdown in Myanmar on the heavily persecuted Muslim Rohingya minority has killed thousands and forced hundreds of thousands to flee to neighbouring Bangladesh.

A third speaker is heard saying that he wished he had killed Modi’s predecessor, the main opposition Congress party’s Manmohan Singh, who was the first Sikh prime minister of India.

Another said he had asked hotels from his state not to allow Christmas celebrations. The statement was met with cheers from the audience.

The BJP denies accusations that its agenda is to turn officially secular and pluralistic India into an ethnic Hindu nation.

The police chief of Uttarakhand state, Ashok Kumar, said such incidents would not be tolerated. He added that a case had been registered under a section of Indian law that prohibits promoting enmity among different groups on grounds of religion. Such offences can get a jail term of up to three years.

Kumar said the case was registered as soon as a formal complaint was made. The case names only one person, a former Muslim who converted to Hinduism, and other unknown people.

Al Jazeera’s Pavni Mittal, reporting from New Delhi, said none of the other leaders in attendance, despite the evidence, have so far had any cases registered against them.

“All of this is on tape, the speeches went viral, so the police have evidence but nothing else has actually been done,” she added.

Many in the Muslim community say they have been increasingly subject to attacks and threats since Modi, a lifelong member of a hardline Hindu group, came to power.

The president of Jamiat Ulama-i-Hind, India’s largest socio-religious Muslim organisation, accused the government of turning a blind eye to the hate speech against the Muslim community.

In a letter to various officials, Maulana Mahmood Madni demanded “strong actions” against the offenders. “They have posed threat to the peace and communal harmony of the country,” he said.