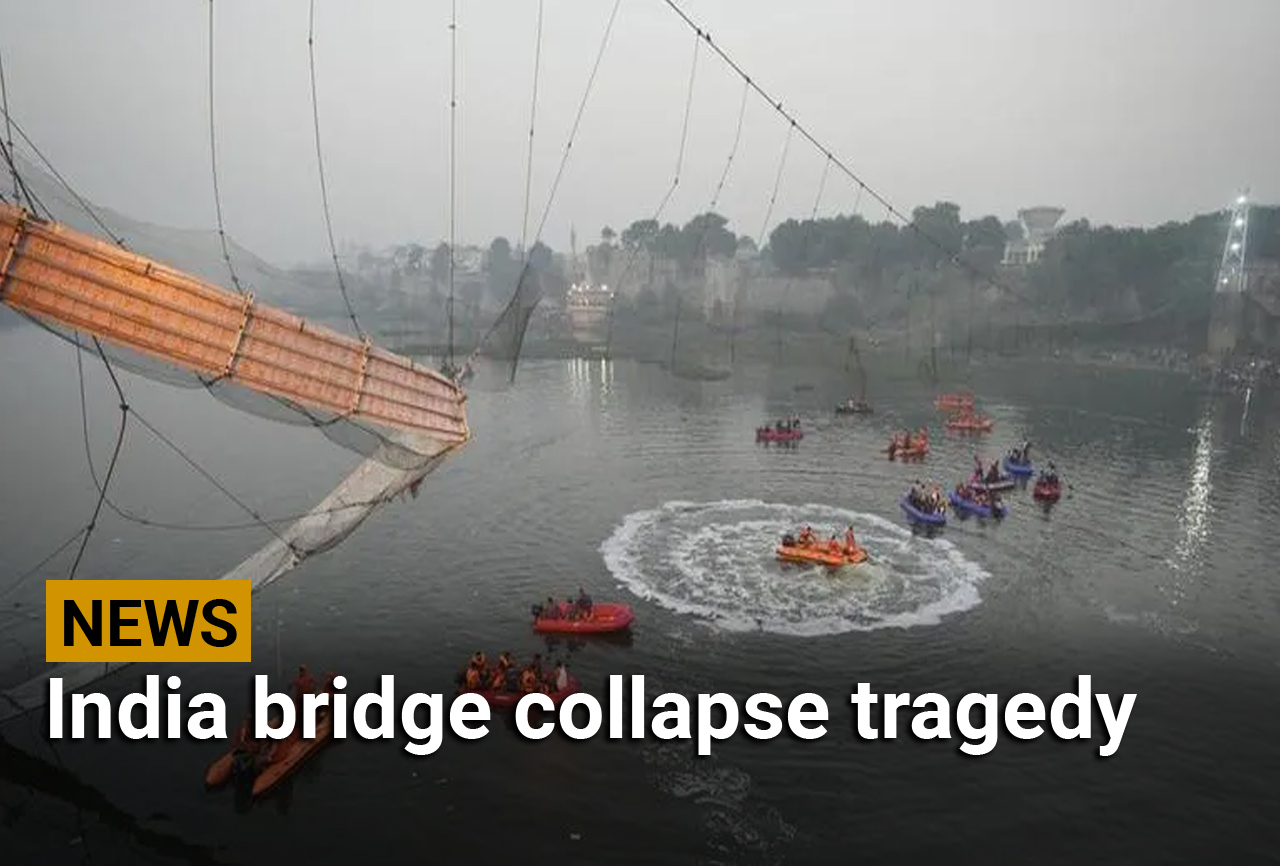 In a horrific incident that unfolded on Sunday evening, hundreds of people fell into the Machchuu river in Gujarat’s Morbi district after a cable suspension bridge they were walking on, collapsed. More than 130 people have lost their lives, and multiple teams of SDRF, NDRF, Indian Army and even Coast Guard have been deployed for relief work.

The British-era bridge opened for public on October 26 after undergoing a six-month-long renovation. At the time of the incident, 400-500 people were on the bridge, and when it collapsed, hundreds of them fell into the river. Several visuals and videos have emerged showing people holding onto the cables of the collapsed bridge and even swimming to navigate themselves to safety.

Gujarat chief minister Bhupendra Patel, who cancelled all his scheduled events for Sunday, reached the collapse site late last night to take stock of the situation. He also visited the district hospital where the injured have been admitted. Patel had spoken with Prime Minister Narendra Modi soon after the incident happened, and the latter had called for “urgent mobilisation” of teams.

State home minister Harsh Sanghavi, meanwhile, informed that a criminal case has been registered in the matter and those found guilty will be given strict punishment. He added that a five-member committee has been formed to unearth the lapses in the renovation work of the bridge.

About 141 people have died, while more than a 100 other have been admitted and are under treatment after a colonial-era cable bridge collapsed in Gujarat’s Morbi town on Sunday evening, plunging over 350 people into the river.

Nine persons of the Oreva group, involved in the maintenance and management of the bridge, were arrested on October 31 in connection with the collapse of the cable suspension bridge on the Machchhu river. Police have registered an FIR on charges of culpable homicide against agencies given the task of maintenance and operation of the bridge in Morbi city which collapsed on Sunday evening.

Several teams of NDRF and personnel of Navy and Air Force have been ordered to be airlifted to the site to help in the rescue efforts and comb the river bed as many people are feared drowned in the 10 feet deep water.

Prime Minister Narendra Modi will on November 1 afternoon visit Gujarat’s Morbi, Gujarat Chief Minister’s Office announced. Earlier in the day, PM Modi, who is in Kevadia, stated that rescue opeations were under way and there would be no laxity in rescue and relief efforts.

Prime Minister Narendra Modi on Monday night chaired a meeting on the Morbi bridge collapse in Gujarat and asked authorities to extend all possible help to those affected by the tragedy, officials said.

At the meeting, which took place at the Raj Bhavan in Gandhinagar, the PM, who is touring poll-bound Gujarat, was briefed on the relief and rescue operations at the accident site, located around 300 km from the State capital, they said.

Mr. Modi emphasised on ensuring that those affected by the disaster get all possible assistance, the officials said. – PTI

Lok Sabha member from Rajkot Mohan Kundariya said 12 of his relatives were among those killed in the suspension bridge collapse in Morbi town of Gujarat.

They had gone to visit the picnic spot on Sunday when the tragedy took place, the BJP MP said. Mr. Kundariya said the 12 victims from his family included five children, four women and three men, all close relatives of his elder brother.

About 300 Army personnel deployed in search and rescue operation

Around 300 Army personnel have been deployed in the search and rescue operation at the Morbi bridge incident site in which over 140 people lost their lives, said army sources.

Days before collapse, firm claimed it had spent ₹2 crore on renovation, materials made as per specifications

Morbi-based clock and e-bike maker Oreva group was given a contract by the Morbi Municipality to repair and operate the ill-fated hanging bridge for 15 years and charge tickets in the range of ₹10 to ₹15 for its use, as per documents of the municipality assessed on Monday.

The firm had claimed on October 26 that it had roped in experts for the repair work, adding that the material used was built as per specifications by “specialised firms”.

After the completion of the renovation, the hanging bridge, originally built in 1887 by the erstwhile Morbi ruler Vaghji Thakor, was thrown open for the public on October 26 by Oreva Group’s Jaysukh Patel and his family in the presence of the media. – PTI

In the wake of the bridge collapse tragedy killing over 140 people, Gujarat Police arrested nine persons of the Oreva group — 2 managers, 2 contractors, 3 security guards and 2 ticket window clerks — involved in the maintenance and management of the colonial-era bridge in Morbi.