Home NEWS How Israeli-Palestinian Conflict Spilled into the World Cup 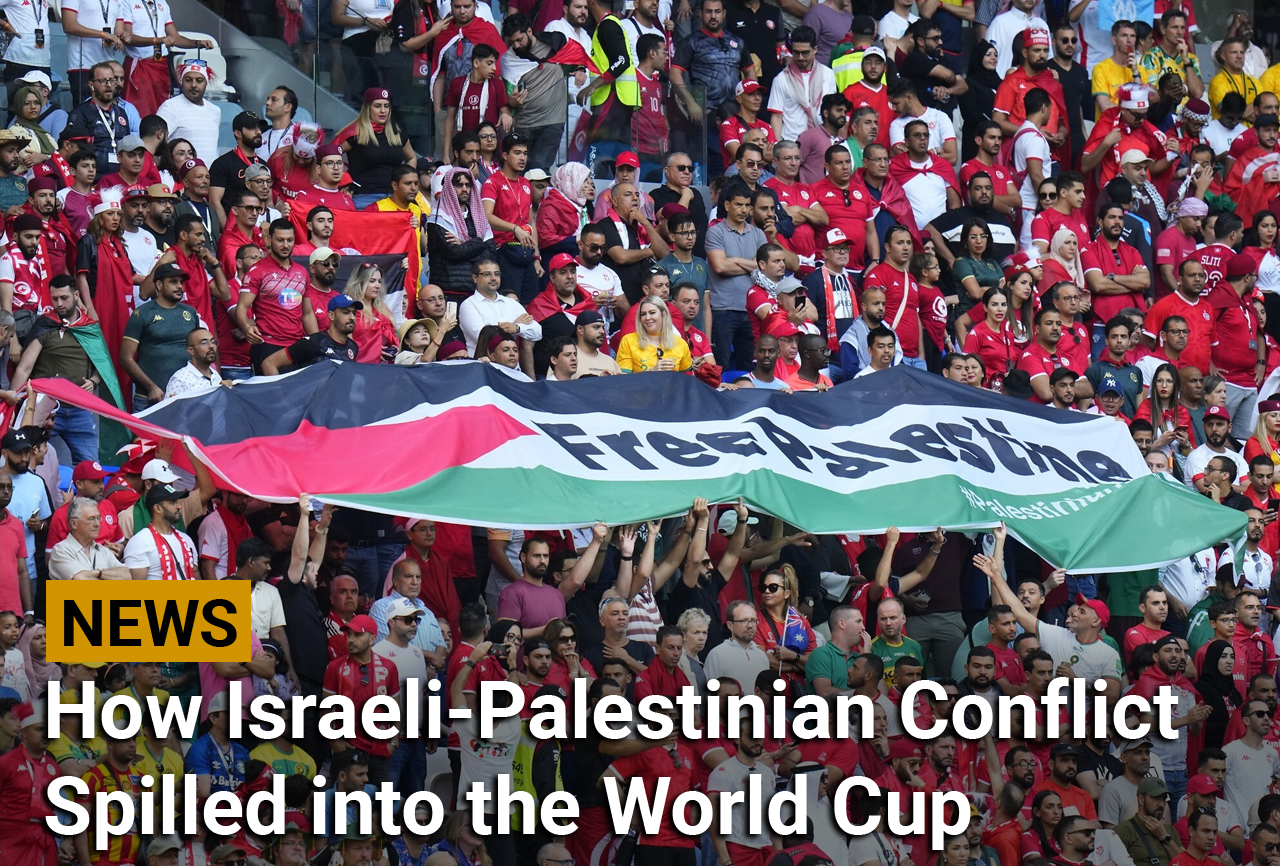 With reported hostilities against Israeli journalists and the flag of the Palestinian territories flying on the streets and in the stadiums, it is clear that the World Cup in Qatar is not apolitical.

Neither Israel’s or Palestine’s footballers qualified for this World Cup, yet the Israeli-Palestinian conflict appears present in Qatar. A video went viral on social media last week showing Israeli television journalist Moav Vardi being harassed and accosted by Saudi fans. “You are not welcome here, this is Qatar, this is our country,” Vardi was subjected to.

One of the Saudi fans involved later defended himself. “The way the Israeli journalist approached us was very provocative,” he told DW. He had not meant Vardi personally but had simply made his principles clear. “We believe in Palestine as a country that has existed for hundreds of years. That’s the conflict, not the conflict between Jews and Muslims or Christians.”

Israeli journalist thrown out of taxi

For Israeli TV journalist Amit Lewinthal, this World Cup will be his fourth. He feels “pretty safe,” and most of the Arab fans he talks to are great, Lewinthal tells DW. Still, the job in Qatar “is challenging, that’s a fact — and we have to deal with the hatred of some Arab fans here.” One of the station’s employees, for example, was thrown out of a taxi by a Palestinian driver. A group of at least 20 people entered the TV studio and shouted “Free Palestine”. After five minutes, the Qatari security forces put an end to it.

However, Lewinthal said it was not only media workers who were having difficulties, but also thousands of Israeli soccer fans who had traveled to Qatar for the World Cup. “Many fans have a bad feeling because they are hated by certain Arab fans and you see Palestine flags everywhere.”

Not only are many people spotted on the streets of Qatar carrying Palestinian flags, but also in the stands of the World Cup stadia. When Morocco clinched a 2-1 victory over Canada, Moroccan players Jawal el Yamig and Selim Amallah, who were substituted in the match, did a lap of honor holding Palestinian flags. Normally, FIFA only allows the flags of the nations involved in the match.

During the Tunisians’ 1-0 victory over world champions France in their last group match, a pitch invader from Tunisia with a Palestinian flag caused a brief interruption in the game. When Qatari stewards overpowered the man in a rather rough manner, they were asked by Tunisian players not to touch him too hard.

“Quite normal” is what Tunisian fan Mahmoud finds the actions and also the difficulties of Israeli reporters in Qatar, considering Israel’s actions in the Palestinian territories. “The Israelis can’t just do what they do there and expect us to embrace them,” Mahmoud tells DW. “That’s just not fair.”

Cautious rapprochement by some Arab states

Tunisian President Kais Saied, in office since 2019, has clearly sided with the Palestinians in the conflict and rejects the cautious rapprochement of some Arab states with Israel. The United Arab Emirates and Bahrain had established diplomatic relations with Israel in 2020 in the so-called “Abraham Agreement” with Morocco and Sudan later following suit. Saudi Arabia continues to reject diplomatic relations with Israel, but opened its airspace to Israeli aircraft last summer, which was seen as a sign of détente between the two states.

A Tunisia fan runs onto the field in Qatar grasping a Palestine flag.

At FIFA’s request, Qatar has also allowed direct flights from Israel — but only for the duration of the World Cup. The soccer world governing body proudly announced that Israelis and Palestinians were now coming to Qatar together. “They are flying together and enjoying soccer together,” FIFA President Gianni Infantino cheered, already seeing this as a sign “that relations in the Middle East are improving.”

Qatar, however, is considered one of the most important allies and donors of the radical Islamic Palestinian organization Hamas. And Israel’s hopes that Qatar might join the Abraham agreement have not yet been fulfilled.

‘Respect is the order of the day’

To Israeli soccer fans and reporters in Qatar, the government in Jerusalem advised them to show restraint, not to provoke anyone and not to rub everyone’s noses in the fact that they are from Israel. “Of course, this is not ideal. I would also prefer to say I’m from Israel and feel good about it, rather than hide my identity,” says Lewinthal. “But it’s better to be smart than too brave in this situation. I understand how complex this all is.”

For him, the priority is that there are no violent clashes during the World Cup, he said. “Mutual respect is the order of the day.” The World Cup certainly offers the chance “for more stability and maybe even peace in the region,” Lewinthal says. “And it helps people get closer to each other. We have to respect their culture, and they have to understand ours — and then we meet in the middle.”