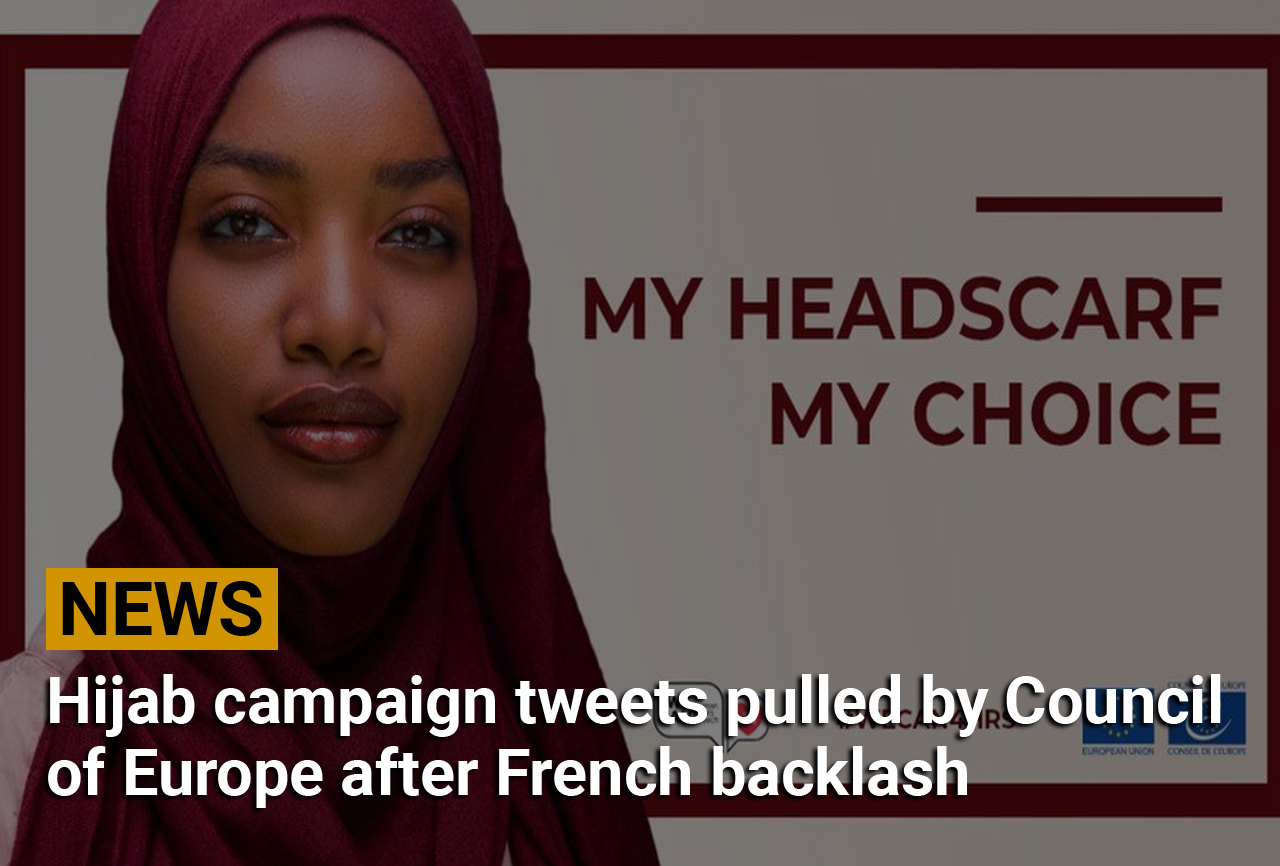 Europe’s top human rights organisation has pulled posters from a campaign that promoted respect for Muslim women who choose to wear headscarves after provoking opposition in France.

The Council of Europe released the images last week for a campaign against anti-Muslim discrimination.

A slogan on one advert read: “Beauty is in diversity as freedom is in hijab”.

Several prominent French politicians condemned the message and argued the hijab did not represent freedom.

But some Muslim women who wear headscarves said the reaction showed a lack of respect for diversity and the right to choose what to wear in France.

France’s youth minister, Sarah El Haïry, said she was shocked by one poster, which showed a split image of one women wearing a hijab, and one not.

In an interview on French TV, the minister suggested the poster had encouraged women to wear headscarves. She said this message jarred with the secular values of France, which had expressed its disapproval of the campaign.

On Wednesday, the Council of Europe told the BBC that tweets related to the campaign had been deleted “while we reflect on a better presentation of this project”.

A spokesman said the tweets were part of an anti-hate speech campaign led by the inclusion and anti-discrimination department of the Council of Europe.

One of Europe’s oldest political organisations, the Council of Europe aims to uphold human rights, democracy and the rule of law. Its activities are distinct from, but partly funded by, the European Union.

The campaign was the product of two online workshops held in September and organised in collaboration with Femyso, a forum of Muslim youth organisations across Europe.

The wording of the campaign “reflected individual statements from people who took part in one of the project’s workshops”, the Council of Europe spokesman said.

The spokesman said the messaging did not reflect the position of the Council of Europe or its secretary-general, Marija Pejcinovic Buric.

The president of Femyso, Hande Taner, defended the campaign on Wednesday in an interview with the BBC.

She said “the campaign itself is still on” but added: “As for why the tweet was deleted, I can’t speak on behalf of the Council of Europe.”

Ms Taner said it was “really sad that the efforts of minority youth are being attacked and undermined” by politicians.

The reaction was “another example of how the rights of Muslim women are non-existent to those who claim to represent or protect notions such as liberty, equality and freedom”, she said.

In 2011, France became the first European country to ban the full-face Islamic veil in public places.

The Council of Europe’s posters started drawing the attention of French politicians from parties of the left, right and centre on Monday.

Among those to weigh in were leading candidates in next year’s presidential election.

In one tweet, far-right commentator Eric Zemmour, who is riding high in the polls despite not yet declaring his candidacy, accused the campaign of promoting “the veiling of Europeans”.

National Rally candidate Marine Le Pen tweeted: “It’s when women take their veil off that they become free, not the other way around.”

Ms Taner responded: “If there’s a claim of freedom, this freedom should be universal.

Ms Taner said in France, where is liberty is highly valued, “there is a double standard where this freedom is not protected at the same level” for specific groups, such as Muslim women.