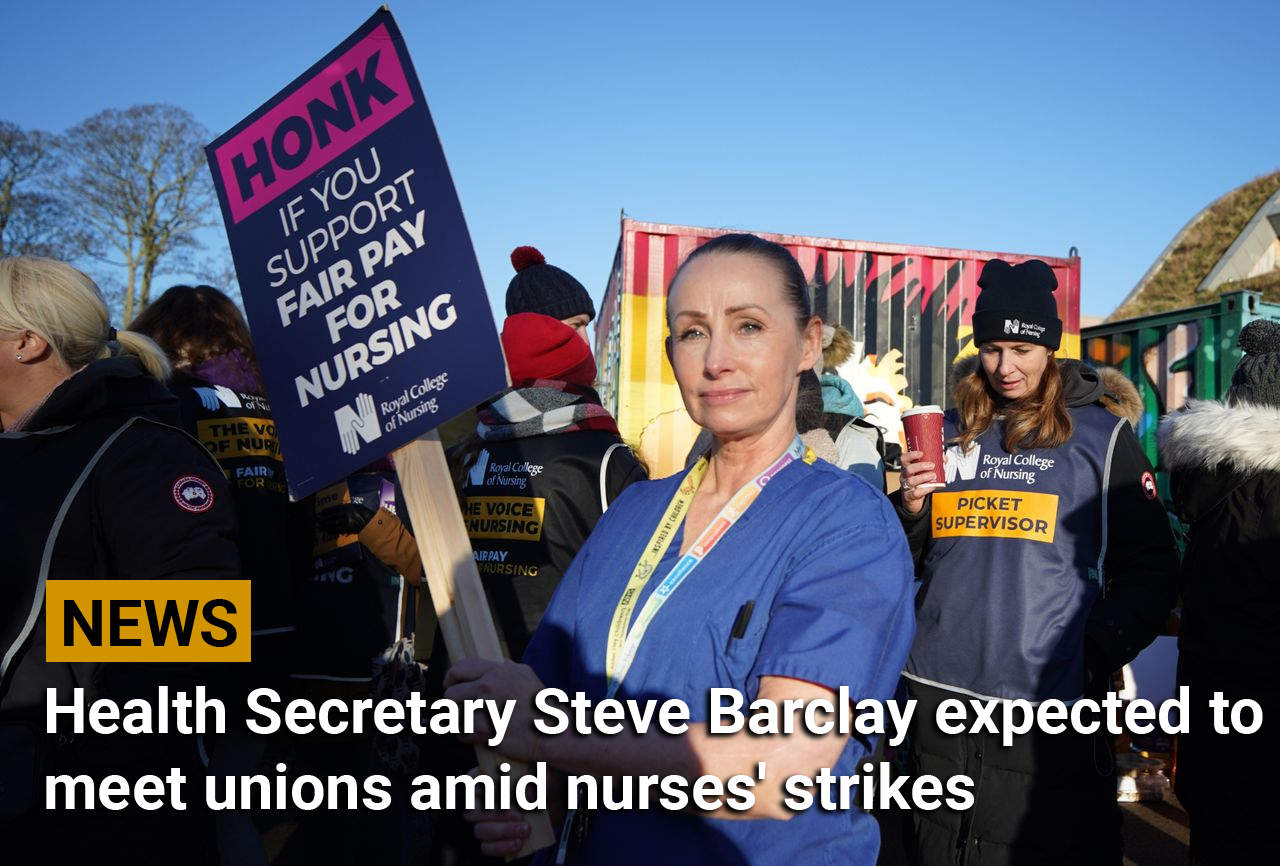 Steve Barclay also calls on nurses and ambulance staff to “honour commitments” over patient safety when they strike this week.

Health Secretary Steve Barclay is expected to meet with members of Unite, Unison and GMB unions tomorrow amid further walkouts by nurses and ambulance workers.

It is understood that Mr Barclay wants assurances from union officials that Category 2 incidents – such as strokes or cases of serious chest pain – will be attended to during industrial action.

Sources say the health secretary will not discuss increasing wages during the fresh talks.

Both nurses and ambulance workers are set to stage walkouts this week amid ongoing anger over pay and working conditions.

The chief of the Royal College of Nursing (RCN), Pat Cullen, had suggested strikes would be called off if Mr Barclay opened up discussions over wages.

But a government source insisted Mr Barclay will only talk about “patient safety and non-pay issues”.

The RCN is demanding an inflation-matching pay rise plus 5% for its members, but the government will only offer around 4%, as recommended in the summer by an independent pay review body – before inflation hit record highs.

A spokesperson for the GMB union said: “He must start listening to what ambulance workers are saying – he needs to talk pay now.”

Speaking earlier, Rishi Sunak said the government had been “reasonable and fair” throughout negotiations, and increasing the offer would only increase inflation.Advertisement

“We’re always happy to sit down and talk to people to try and work through difficult challenges like this,” he said. “That’s always been the case and when it comes to pay, it’s because these things are difficult, that we have an independent process.

“But the government increased its offer so it could accept those independent recommendations in full. I thought that was the reasonable and the fair thing to do.”

Mr Barclay told reporters on Monday that trade unions should accept the pay review figure, saying nurses he had spoken to had other concerns they wanted addressed.

“They also talk about the estate and our new hospitals building programme being really important to them,” said the health secretary.

“They talk about frustrations often with technology and how we need to invest more in that.

“They talk sometimes about some of the abuse that they receive and issues of safety and how we can work together to improve safety for staff.

“So there’s a range of issues that are raised by nurses with me.

“Pay is a factor and that’s why we have an independent process to look at that, but there’s a range of other things that also matter to staff, and I’m keen to work with the trade unions to address those concerns as well.”

Asked last night about reports Downing Street had blocked the idea of a one-off payment to nurses to prevent the strikes, Mr Barclay told reporters his conversations with Number 10 would remain private.

Meanwhile, the minister questioned the safety of the upcoming ambulance strikes.

Staff will still respond to the highest level of emergencies and are making plans for cover, while the government plans to bring in the armed forces to fill some of the gaps, with 1,200 troops expected to be deployed.

Department heads have also met this morning to discuss the strikes at an emergency government COBRA meeting.

But Mr Barclay claimed “the practical arrangements” had still not been confirmed by the unions at this late stage.

“It’s important that the trade unions honour the commitments that they’ve given to safeguard both life-threatening responses and emergency responses,” he said.

“It’s important that everyone prioritises patient safety, and in particular, those life-threatening and emergency calls.”

Unite leader Sharon Graham, who represents some ambulance workers, said the health secretary would “have to carry the can if patients suffer”, telling the Daily Mirror he was “holding the country to ransom” by refusing to discuss pay.

Unions have also attacked the plans to use armed forces personnel, saying they are not “sufficiently trained” and could even be a “hindrance”.

Senior military officials have also criticised the move, with the head of the armed forces, Admiral Sir Tony Radakin, warning it was “perilous” to expect them to be used routinely to cover for strikes.