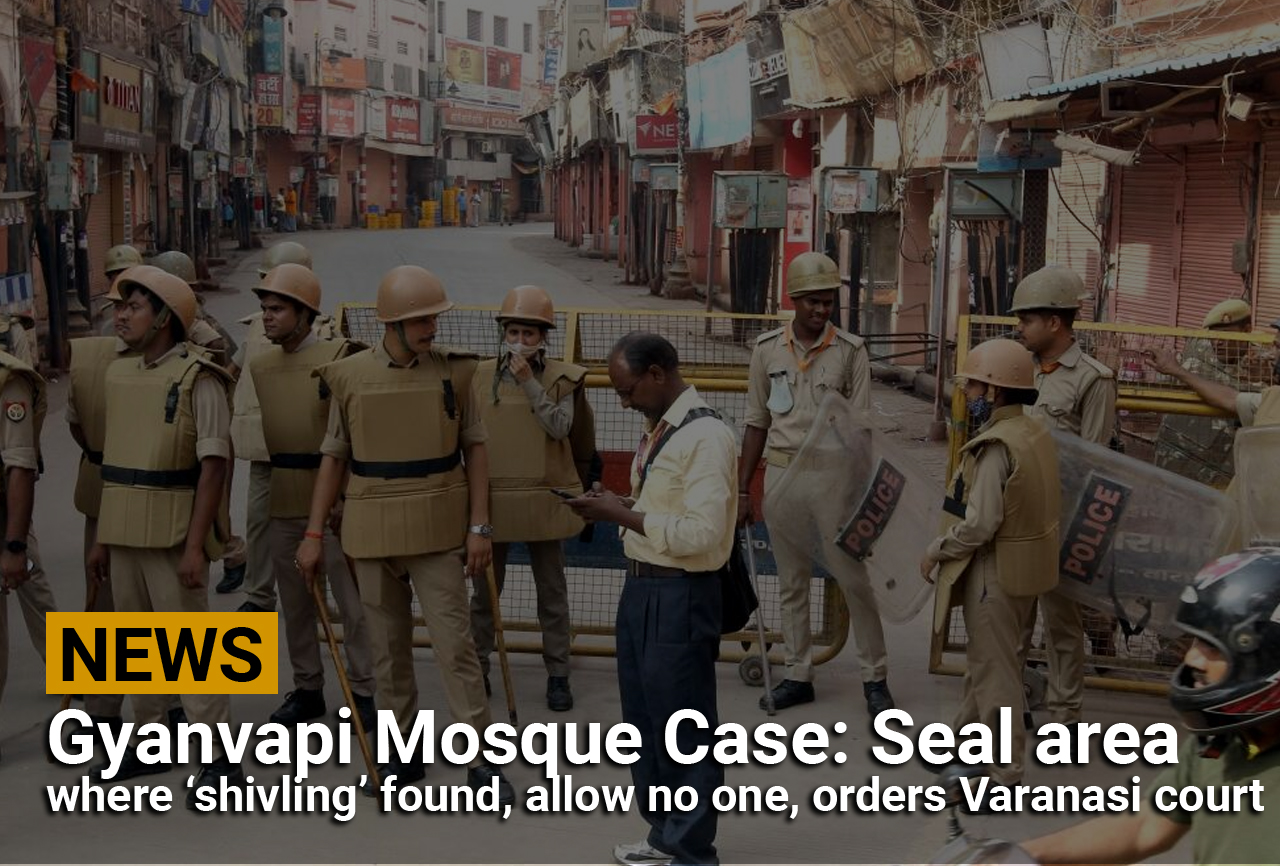 The three-day survey of the complex being done by the Commission concluded on Monday at noon, with officials saying that the findings of the survey were “confidential”.

Returning the spotlight to the Kashi Vishwanath temple-Gyanvapi mosque controversy, a Varanasi court Monday directed the district administration to seal the spot in the mosque complex where a Shivling was claimed to have been found during a court-mandated videography survey that just concluded.

The Anjuman Intezamia Masjid Committee said it would challenge the order in the Supreme Court where it had already moved a plea against the videography survey. It said the object being described as a Shivling was part of the fountain in the wuzu (ablution) area.

Civil Judge (Senior Division) Ravi Kumar Diwakar, hearing a plea by five women seeking permission for daily prayers at Maa Shringar Gauri Sthal on the outer wall of the mosque complex, said, “District Magistrate, Varanasi, is directed to immediately seal the place where the Shivling has been found. No person should be allowed to enter the place which will be sealed.”

“The responsibility for the security and custodianship of the place which will be sealed will be considered personally of Varanasi district magistrate, Varanasi police commissioner and the CRPF commandant, Varanasi,” the judge said.

Advocate Hari Shankar Jain, representing the five women petitioners, filed an application Monday, saying a “Shivling is found in masjid complex at the place where wuzu khana is there”.

A commission tasked by the court to conduct a survey will submit its report and findings on Tuesday. It concluded its survey Monday and officials said the findings were “confidential”.

According to the court order, the application filed by Jain stated that a Shivling was found inside the mosque complex by the survey commission on May 16.

S M Yasin, general secretary of the Anjuman Intezamia Masjid Committee, said, “We will challenge today’s order for sealing in the writ petition being heard in the Honourable Supreme Court. The structure is part of the fountain in the wuzu area. In all old mosques, there used to be a hauz (basin), and a fountain in the centre. This is part of the fountain, which they are calling Shivling. We are surprised how the court passed the order in a hurry. We will mention it in the Supreme Court.”

District Magistrate Kaushal Raj Sharma said, “The court commissioner had given directions to all parties that until the report is submitted in court on May 17, no one should disclose what was found inside. But still if someone of their own will has given some information, then it can’t be verified by anyone. Only the court is the custodian of this information. If someone has told you something, it is a personal thought. It has nothing to do with the court commission’s action.”

Police Commissioner Satish Ganesh told mediapersons that the action of the court-appointed commission was completed Monday. “It was done in an ideal atmosphere where no incident of law and order happened. We thank the people of Kashi for their cooperation.” He appealed to the media to “not pay heed to any unofficial statement”.

Soon after the court order, UP Deputy Chief Minister Keshav Prasad Maurya, in a Twitter post, said, “No matter how much you hide ‘truth’, it comes out one day because ‘truth is Shiv’. Baba ji ki jai, har har Mahadev. #GyanvapiTruthNow. #Gyanvapitemple.”

In another tweet, he wrote in Hindi, “On the occasion of Budh Purnima, the manifestation of Baba Mahadev at Gyanvapi is a mythological message to Sanatan Hindu tradition.”

Meanwhile, the All India Muslim Personal Law Board, responding to the court order, said the “Gyanvapi mosque in Varanasi is a mosque and will remain one”.

“To convert the mosque into a temple, then it is nothing but an attempt at a conspiracy to give birth to communal hatred. This is against the historical facts, and against the law,” said a statement issued by AIMPLB secretary Maulana Khalid Saifullah Rahmani.

“In 1937, the court had established in the Din Mohd vs. Secretary of State case matter that the premises is a property of Muslim Waqf and Muslims have a right to offer namaz there. The court had also determined how much of the disputed land is mosque’s and temple’s… Then, the Parliament passed the Paces of Worship Act, 1991 which says that the status of religious places as in 1947 will remain. Then in 2019, the Supreme Court in the Babri mosque matter also said clearly that all places of worship will remain under this Act,” the AIMPLB said.