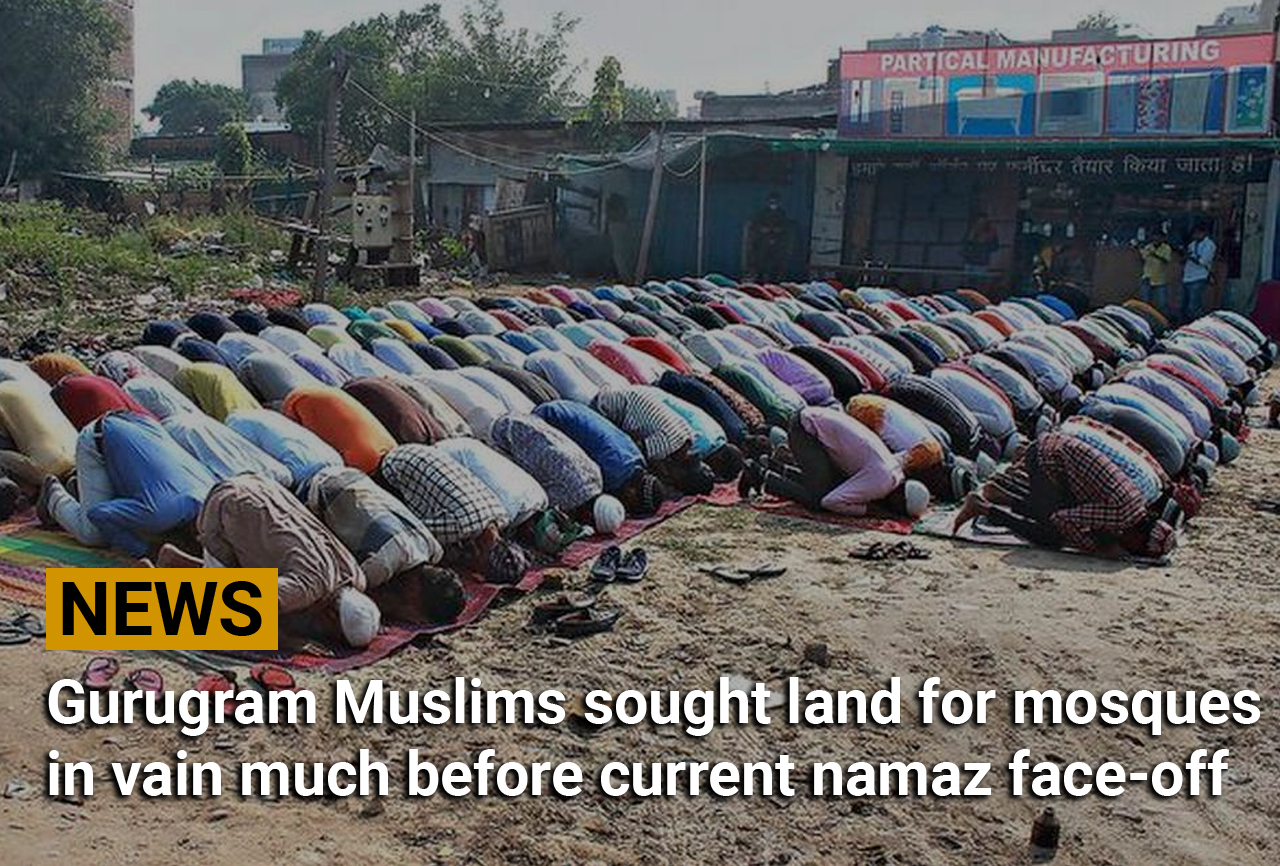 The community has applied to Govt. for five sites in five years for allotment of land, but failed to get any

Much before the controversy over offering of Jumma Namaz (Friday prayer) in the open erupted in the Millennium City in 2018, the Muslim community had realised the need for more mosques for their growing numbers, and to avoid inconvenience to residents.

Two trusts — India Islamic Research Center (IIRC) and Muslim Minority Trust — had applied for five of the religious sites on offer by the Haryana Government in 2016. A detailed brochure accompanying the application pointed out how only nine mosques, including Anjuman Trust Masjid in Sector 57, had the total capacity to accommodate only 3,200 people. But they failed to get the land.

Again, amid the raging protests across the city over namaz in the open this year, the IIRC applied for allotment of 1,627 sq. m. plot in Sector 39 two months ago in response to an advertisement by Haryana Shehri Vikas Pradhikaran (HSVP). Though the trust has not officially been communicated about the decision yet, one of the members present at the interview for the plot allotment said they are not very hopeful this time as well.

“The interview was conducted by a committee headed by the Gurugram Divisional Commissioner via videoconferencing last month. However, the entire exercise was over in just seven minutes,” said Gurgaon Muslim Council member Altaf Ahmad, who was part of a five-member committee of the IIRC attending the interview.

Their proposal, Mr. Ahmad said, was for a multi-purpose hall for religious, educational and social activities for the community. “We duly paid 10% cost of the plot, around ₹18 lakh, as an earnest money and produced bank account details for another 25% amount,” he said.

As per the policy, normally two sites for religious or social institutions are provided in the layout plan of each sector at different places and the applications for the allotment of the same at concessional rates are invited through advertisement in newspapers. The applications are scrutinised by a committee headed by the deputy commissioner concerned and its recommendations are placed before the meeting of the HSVP for approval. The institutions or the trusts are required to complete the construction within two years from the date of offer of possession with maximum three years’ extension.

A senior retired corporate employee, who was involved in the process on both occasions as a member of the Muslim community, said members from their own community in the Government had told them that the final decision for land allotment for religious sites, irrespective of the party in power, was politically influenced.

“Whoever is making the decision, we are disappointed to learn that they are not supporting the community and that is recurring repeatedly. In fact, the Muslim community all over the country, and more so in northern India, seems to face marked reluctance from bureaucracy as well as political leadership, irrespective of the party in power, in allotment of land for a mosque. It is just a matter of degree in different dispensations. It has been going on for decades and seems stronger and more in the open now than before,” the source told The Hindu.

He recalled how the land for the Sector 57 mosque too was allotted with “a great degree of difficulty and political influence” with two prominent political leaders from the community speaking to then Chief Minister Om Prakash Chautala in this regard. “Still the mosque is caught in a legal tangle with a case filed on the grounds that the land allotted was meant for other purposes and the area had little concentration of Muslims. The mosque is partially built with stay on further construction.”

In 2016, the earnest money deposited for the sites was refunded a year later and the community members were verbally told that “the process was cancelled. That reason was not officially communicated. It appears the process did in fact go through and we were denied”, the source said.

This year too, the community approached several political leaders before the interview to garner support.

Mr. Ahmad said the community is in urgent need of land for a mosque in New Gurgaon, broadly comprising the South and East municipal zones, not just for their religious activities, but also to present a better picture to foreign visitors from the Muslim community. They come to the city for different purposes, including for treatment at Medanta Hospital, and usually visit the far-off semi-built Sector 57 Anjuman Trust Masjid and get a bad impression, he said.

“We hope the administration understands this, but we are not very hopeful this time as well. We are the largest minority community in the country, but there is a discrimination against Muslims in Gurugram when it comes to allocation of land for religious purposes. If it does not work out this time, we will be left with no choice but to move court seeking land for a mosque,” Mr. Ahmad said.

Why the same uniform for boys and girls in school? Muslim organizations protest