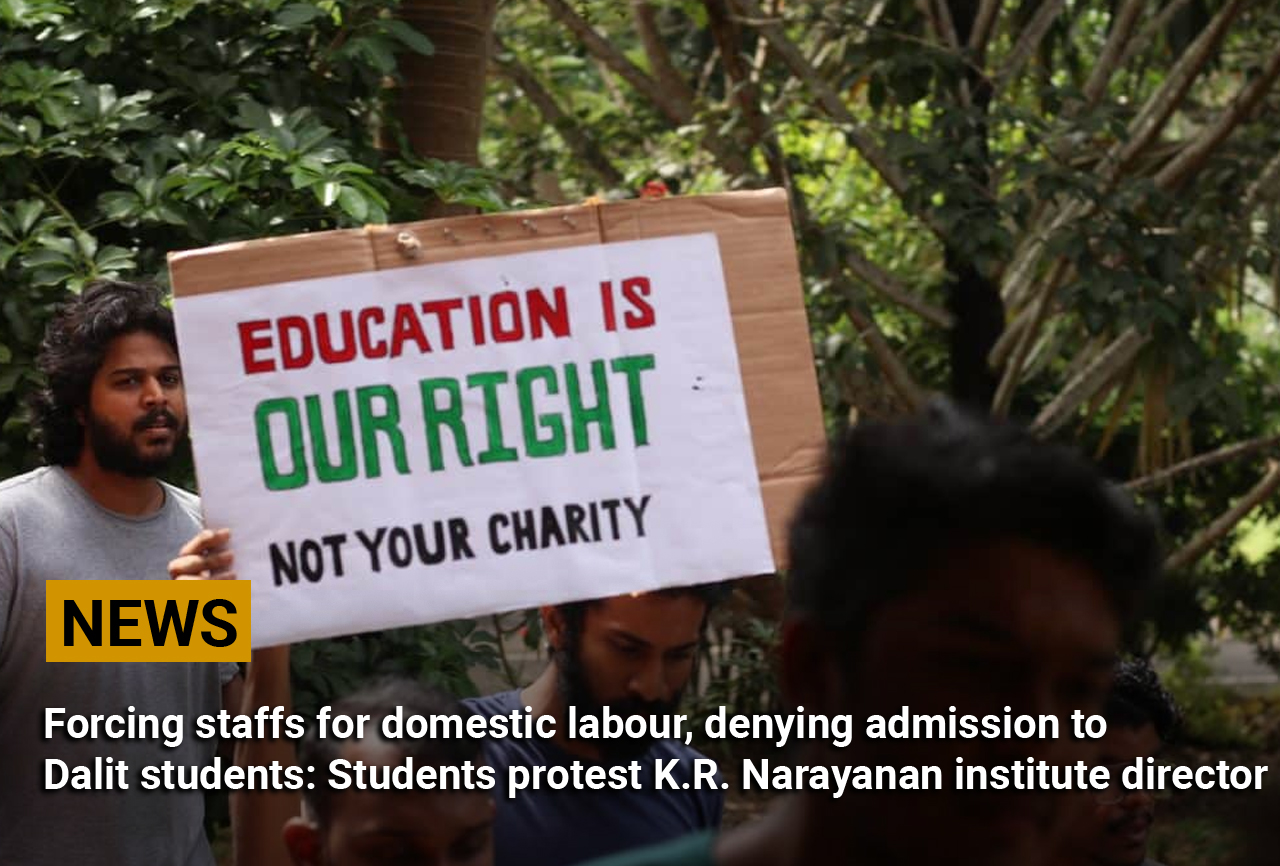 K R Narayanan National Institute of Visual Science and Arts in Kerala which is named after the first Indian President from Dalit community, is currently facing caste discrimination against students and staff, under the leadership of the Director of the institute, Shankar Mohan.

The students in the institute said to Maktoob that they started an indefinite strike on Monday demanding resignation of the institute’s director for alleged caste discrimination.

The protesting students have accused Shankar Mohan of meting out casteist treatment towards students and staff.

Mohan forced sanitation workers to do domestic labour at his official residence and denied admission to a Dalit student, said general secretary of the students council.

“Sanitation workers of the Institute are forced to do domestic labor at the Director’s house and are experiencing caste discrimination like untouchability.They are been threatened about complaining against the director regarding the same,” read the statement by students council.

“Nikhil, a member of the Dalit community who works in the institute as a clerk has also faced similar sort of caste discrimination. A complaint has been filed to the Honourable Chief Minister against the discriminations and mental torture by the director,” it stated.

During the admission of the 2022 batch, a student from Dalit community named Sharat has been denied admission in the Editing department, even there were 4 seats left out of the total 10 seats, the students alleged.

The students council also said Mohan took the lead in shortening three-year courses offered by the institute into two-year programmes without due consultations and research. The statement read: “Without any proper research the 3 Year course in the institute was shortened in to 2 Year course, which was once tried and failed in FTII, Pune. The institute haven’t taken any steps to provide proper syllabus and academic calendar for the two year batch even after one month has been completed.”

Tata Institute of Social Sciences Mumbai Students’ Union said they stand in solidarity with the protesting students demanding the resignation of the institute’s director.

“The prevalence of Identity-based discrimination in Indian Universities has been an open secret for decades. Discrimination based on a person’s identity has been normalized in campus spaces. Direct and indirect systematic discrimination against individuals based on their religion, caste, gender, and ability continues to distress life and thwart access to higher education. Recently, a Muslim student from the Manipal Institute of Technology, Karnataka, called out his professor for allegedly calling him a ‘terrorist’ over his religious identity. Hate, hostility, and prejudice towards an individual’s identity by means of macroaggression, threatening, harassment, abuse, and intimidation have to be questioned and raised in University spaces. The similar discriminatory act by Mr. Shankar Mohan, Director of the KRNNIVSA, questions the safe space for students from marginalized backgrounds in the institute. Mr. Mohan had forced sanitation workers to do domestic labour at his official residence and denied admission to a Dalit student in the editing department even as four seats were lying vacant, along with many other anti-student measures taken on campus. When an individual has to go through inhumane treatment on a college campus, the ideal of a university as a place for learning and growth is ruptured. Inhuman treatment or threats targeting students, staff, or faculty impair not only the educational mission of an institution of higher education but also deprive young students of the chance to live and learn in an atmosphere free of fear and intimidation,” read TISS student body’s statement.

FIFA World Cup: Bono stars as Morocco become only Muslim country to advance to next stage