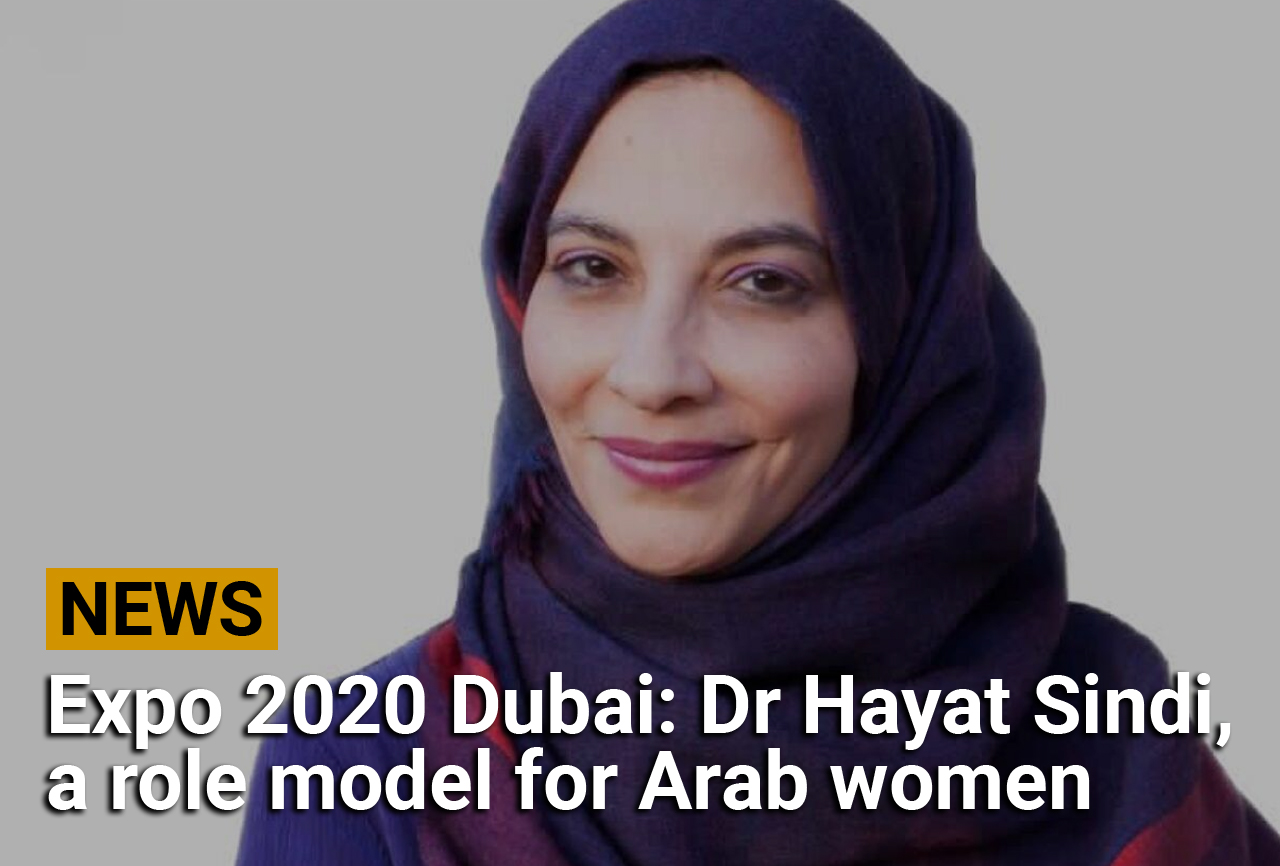 Meet the pioneering Saudi biotechnologist and inspirational female leader, who combines her scientific temper with human touch to bring about radical social changes.

Dr. Hayat Sindi is one of the world’s leading biotechnologists and a global champion of science and technology. She is a pioneering, inspirational female leader, working to improve the lives of people around the world, through her resolute belief in the power of science, technology and innovation to solve the greatest development challenges.

The former Senior Advisor to the President of the Islamic Development Bank (IsDB) for Science, Technology and Innovation, Dr. Sindi was voted one of the BBC’s top 100 Women 2018, a list of inspiring and influential women from around the world. Her remarkable career includes co-founding and co-inventing “Diagnostics For All” — a programme to create affordable diagnostic devices for millions of people in impoverished regions — alongside a team from Harvard University. These innovative, inexpensive and point-of-care diagnostic devices require no power, water or trained doctors and can provide potentially life-saving medical results in minutes.

She was a speaker for an event for the occasion of the International Day of Women and Girls in Science on Friday at the Expo 2020 Dubai.

Dr Sindi spoke exclusively with Khaleej Times ahead of the Friday’s event.

Edited excerpts from the interview:

You’re the first woman from the Arabian Gulf to earn a Ph.D. in biotechnology, studying at King’s College London, the University of Cambridge, the Massachusetts Institute of Technology, and Harvard University. What’s the biggest challenge that you had faced in your childhood?

As a child, I waded through dusty books, looking for female heroes, heroes in science. But I couldn’t find any women that looked like me. I was fortunate to have a supportive father, but this is not always the case for every girl. This is why I’m committed to supporting women and girls across the world.

How did you get this strong foundation of self-belief during your formative years in Makkah, Kingdom of Saudi Arabia (KSA)?

I got my strong foundation from my faith, my family and my culture. This started when I first saw how science worked from a young girl. When I was only five years old, I had a little cat called Ginger and a small broken chair which I converted into a small cave. I made it my own little world. I loved learning and exploring space, the moon, the future. My father would teach me anything I wanted. I became fascinated with science that could make the difference between life and death. I admired the scientists and scholars of the past. They were my heroes. I even tried to dress like them. My heroes were Ibn Sina, and Muhammad ibn Musa al-Khwarizmi. They helped define the modern Scientific method during the Islamic Civilisation’s Golden Age.

Scientific scholars are good at uniting science to policy and people’s needs, so science could be steered.

However today, history indicates we don’t have the scientific compass aligned to people’s needs. So, I’d like to make sure that science strikes a big chord with people and contributes to communities’ needs. It evolves into more out of the box.

Social innovation is a critical concept that has given me clarity of a complex world. Social innovation is about building strategies, concepts, and ideas that strengthen civil society. This, in turn, satisfies social needs such as working conditions, education, community and health rather than temporary needs stimulated by media in this day and age.

In 2007, you founded Diagnostic for All, a non-profit initiative that creates low-cost diagnostic devices designed for the developing world. How has the journey been so far?

It was an inexpensive paper technology for diagnostics — a social innovation to help manage HIV/tuberculosis (TB) in the developing world.

As a scientist, I had no idea how to get this going because entrepreneurial skills are crucial at the end of the day.

My boss advised me to go to Harvard Business School to understand the commercial aspect, and how to write the business plan for the company. There was a language to learn such as converting an idea into a product. So, I went outside the scientific community, outside my comfort zone in a bid to translate my ideas into reality

I had to search for the right community for support and encouragement. We along with the Harvard scientific team won the first prize of Harvard Social Innovation Prize, and the MIT $100K (Dh367,000) Entrepreneurship Competition Prize during the same year which gave us a boost and confidence to build a non-governmental organisation (NGO) on it.

What kind of work does Jeddah-based Institute for Imagination and Ingenuity (i2institute) do?

When I left Harvard, I felt the full potential of social innovation was still not being achieved… Students were still centred on their careers, getting tenure tracks, and deeply involved in publications. I remember asking them to step outside the technical box and step into the world of people. The heart and mind must come together. So, science works directly to satisfy human needs, compassion, happiness, and health. Soon, I became a social innovator and started the i2institute. It’s an institute for imagination and ingenuity for youth in the Middle East. I had been imagining about this institute for several years. I was engaging with several individuals, being truly inspired and constantly energised by some brilliant and beautiful minds. I had one big goal in mind. I wanted to create an ecosystem of entrepreneurship and social innovation for scientists, techies, engineers in the Middle East and beyond. I envisioned a platform that can give them the opportunity to realise their potential and make a difference to the society at large.

You’re known to treat your mind as a garden. Expand on that thought.

When I was a child, I dreamt of becoming a scientist to make a difference in this world. After finishing high school, I moved to England to fulfil my dream. So, it was a major transition in my life! Moving to England, and moving alone to a different culture.

Many people in England and in the KSA — except my family, and especially my father — told me that I’m not going to make it, and that I will fail… they indicated that they know the fate of my life and they wanted me to believe them. What could I have said to myself? Well, I said Hayat, no one can know the future!

And no one can feel, how much you want to be a scientist, except you! So, follow your passion, trust yourself, be confident. Some people will always demotivate you directly or indirectly, they can have an opinion about everything you do or have done. The way you talk, the way you dress, where you come from. What you want to be in the future. It’s very easy to fall in and adopt the same way of thinking.

Life, of course, is full of several types of challenges. So, I said to myself, if I do believe in the fire of the imagination to raise life to the highest level. If I believe in the power of social innovation, linking scientific temper to society. I should not stop. Instead, I must continue, and capture that benefit for the poor. Science for me is unlimited and what we can do for our civilisation has no limit. I’ve found the most common way to fail in life is not to try. Start and persist in climbing! Listen to your inner voice. Don’t let people tell you that it’s not possible.

I’ve learnt through travel and study, a thousand miles or a thousand years, you still find people just like you and I.

Ultimately, it boils down to connecting the dots and building efficient teams. I treat my mind like a garden that cultivates beautiful things. We must keep our thoughts healthy. The greatest minds are known for their boundless energy.

My advice to social transformers is to keep imagining the next step and keep going strong. I’m an ardent advocate of keeping the faith going: allow yourself to be who you are, you become, without realising it, a sparkling star in the night sky, providing people a compass to a better life.

Why are there so few women in leadership positions in science?

We need to engage women to drive the scientific engine better. Today, only 30 per cent of the world’s researchers are women and only one in five countries has achieved a gender balance.

But shockingly, only 1 per cent go on to become scientific researchers in the private sector which offers better salaries and opportunities for advancement. No wonder, they hit a wall and are unable to pursue their career dreams.

I believe this is not an isolated problem. It’s happening to varying degrees around the world, in Europe and the Americas.

So, women are not only losing out by a huge margin. So is society. Both science and society are out of sync without women’s creativity and vision.

How are you planning to empower more women across the Arab world to follow in your illustrious footsteps?

When I was chosen to be in the Saudi Shura Council, which is similar to a parliamentary body, it was the role of a scientist in the government. I felt deeply honoured and I wanted to be an integral part of it. Why did I feel so? Because it gave me a voice to inculcate scientific values among the future generation. It’s difficult to find scientists who can become changemakers. Empowering women scientists is another key aspect.

It’s crucial to recognise that a policy framework is crucial for the growth and development of science. At the Saudi Shura Council, we conducted an intensive study to use Science, Technology and Innovation (STI) policy instrument in IsDB and among our member countries on a raft of issues such as climate change, water, education, energy, food security and health, gender employment, indigenous and local knowledge for catering to the United Nations’ (UN) Sustainable Development Goals (SDGs). Women’s role in science can be expanded in a big way by giving a boost to their careers that resonate with society. Dry technologies are of little help. There must be a robust mechanism to support more women leaders. This can be a win-win situation for both women in leadership roles and fostering social changes. For instance, family is an integral part of a living sustainable world. Encourage women to become scientific thought leaders who, in turn, can become role models to their peers. It’d be a convergence of the power of science, businesses and influence that will further strengthen our social values. And the Arab world is steadily working in that direction.