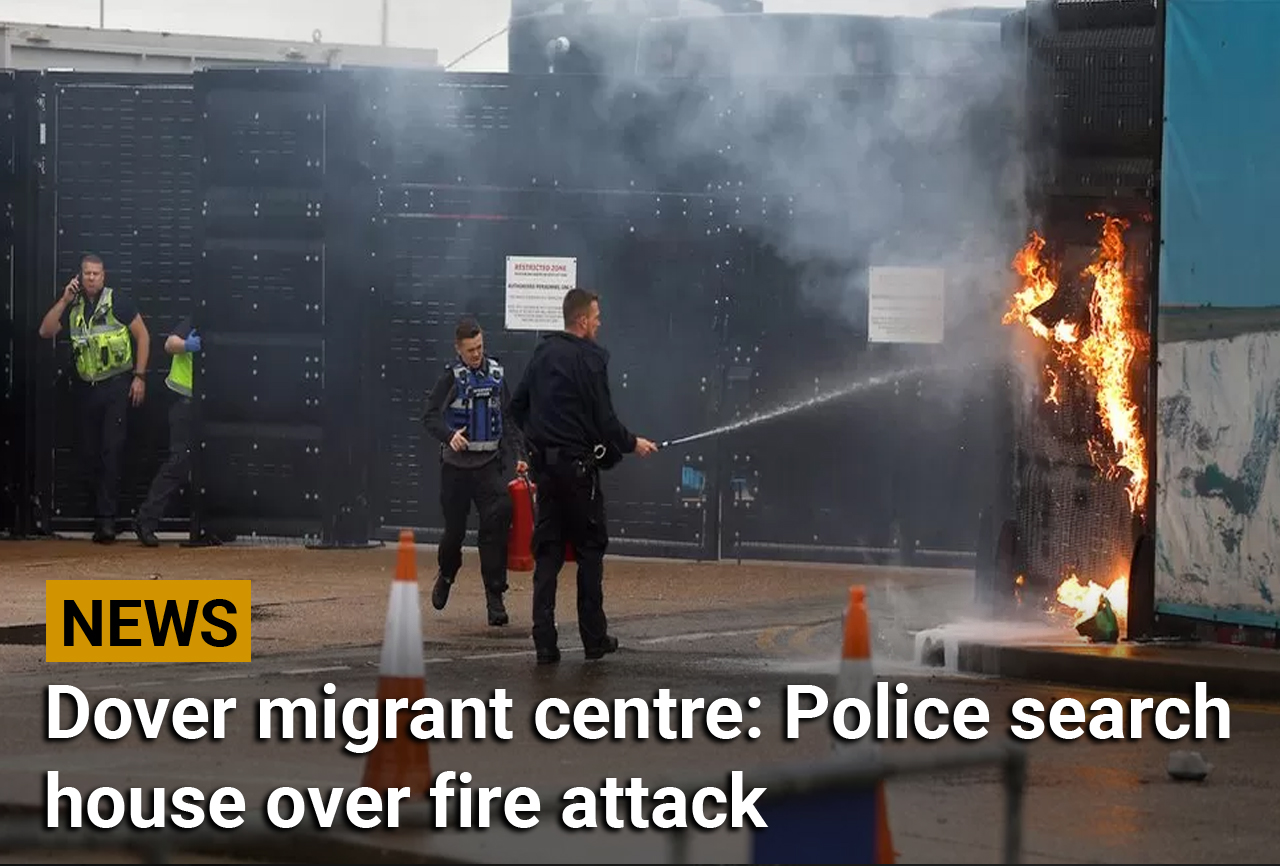 Police are searching a house as they investigate a fire attack at a migrant centre at Dover Port.

Two or three devices – described as petrol bombs by a witness – were thrown by a man who was found dead at a nearby petrol station on Sunday.

Kent Police have confirmed he was a 66-year-old from the High Wycombe area – over 100 miles away from the Border Force facility.

Officers have also carried out a warrant at a property in High Wycombe.

“I’d like to see them stop the boats coming across,” he said.

Mr Collar added: “I know this is something that’s been going on for a few years and if they stopped the boats coming in you wouldn’t have the problem.

“We’ve got to work closely with the French, haven’t we? It’s where they’re coming from.”

Police were called at 11.22 GMT on Sunday to The Viaduct, Dover, where the devices thrown by the suspect had started a fire.

Another device found in the man’s car was later made safe by the Explosive Ordnance Disposal Unit.

A photographer with Reuters news agency who witnessed the incident reported a man had thrown petrol bombs with fireworks attached before taking his own life.

Two people who had been inside the centre suffered minor injuries in the attack.

I am standing right beside the charred fence where the attack took place yesterday. There are petrol marks on the floor, I can see the burnt metal fence.

As far as police cordons go, you wouldn’t know anything took place here.

As you walk around here, you’re aware of an increased police presence, with officers checking who you are and what you’re doing.

There’s still a sense of heightened security, but all the police cordons have been lifted and most of the emergency services have left.

“While I understand the desire for answers, investigators must have the necessary space for work,” she said.

“My priority remains the safety and wellbeing of our teams and contractors, as well as the people in our care.”

She also confirmed the migrant centre is now “fully operational” after the attack.

Dover Conservative MP Natalie Elphicke said she was “deeply shocked” and said the situation on the ground was “concerning”.

She said there had been another incident last weekend, but did not go into detail, as she called for urgent Anglo-French efforts to end small boat Channel crossings.

Kent Police, which is leading the investigation, said it was not currently treating the incident as terrorism.

Philip Blair, 63, was in his workshop in Northbourne, nine miles from Dover, where he believes he heard a number of “substantial booms”.

“It was coming from the direction of Dover but it was colossal. It sounded like a sonic boom,” he said.

“I can’t believe that an incendiary device could make that sound. It was very loud and I was shocked.”

‘Lack of hope’: How will Palestinians vote in Israeli elections?