Home Uncategorized ‘Do we not have any rights?’ Indian Muslims’ fear after Assam evictions 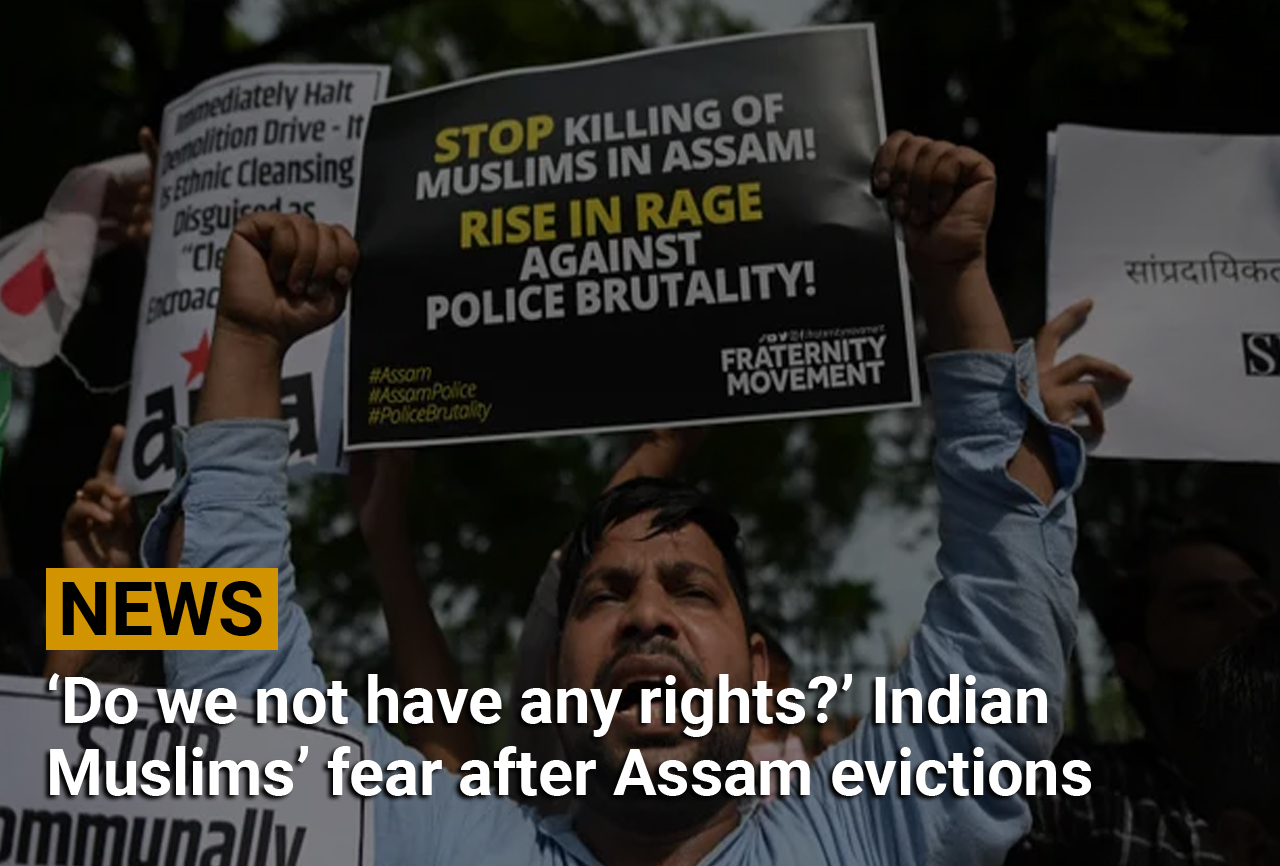 Maynal Haque was holding a bamboo stick in his hand when the police shot him at point-blank range. All around him, the houses of the village he grew up in were being destroyed or set alight by police. As Haque fell to the ground, officers’ batons pounded on his body and a photographer, appointed by police to document the raid, ran over and began stamping hard on him, a scene caught in video footage. Once dead, Haque was rolled into a bulldozer and carried off by officers.

“He was with just a stick but they fired at his chest,” Haque’s wife, Mamataj Begum, said through tears. “They killed him in a brutal way. The sole breadwinner of our family is murdered by police. How shall we live without him?”

Haque, a 33-year-old father of three, lived in Dhalpur, a cluster of villages in the north-east Indian state of Assam, making a living growing vegetables on the fertile land beside the Brahmaputra river and selling them in the market. Like most residents in the villages, home to about 25,000 people, he was a Bengali Muslim – whose ancestry goes back to Bengal and who typically speak Bengali – and had lived his whole life in this community, established in the 1970s.

Most migrated to Dhalpur from other regions of Assam after their land was lost to erosion. Over five decades, the community cultivated the land to build their houses and grow rice and produce next to the riverbank.

But on the morning of 23 September, police descended to clear away the inhabitants of Dhalpur. According to the Assam state government, ruled by the Hindu nationalist Bharatiya Janata party (BJP) that also governs India, this Bengali Muslim community were “illegal encroachers” on government land and on adjacent land which belonged to an ancient Shiva temple.

Yet many believe that the violent eviction that followed, that killed both Haque and a 12-year-old boy, Sheikh Farid, as well as injuring dozens of others including police, was not simply about reclaiming public land. Residents, activists and scholars have alleged that it is part of a broader campaign in Assam to portray Bengali Muslims as foreigners unworthy of citizenship rights, who should go “back to Bangladesh” – despite most being born in India.

“These evictions in Dhalpur are part of the BJP’s drive to politicise and dismantle the citizenship rights of the Bengali Muslims in Assam, and this is a very dangerous path,” said Angana Chatterji, an anthropologist at University of California, Berkeley, who recently wrote a study on the alleged abuses in Assam.Advertisement

“We see the chilling nationalist fervour that these evictions induce. It reiterates their violent divide-and-conquer policy: fracturing communities along religious fault lines to ultimately establish a Hindu majoritarian state.”

For decades, Assam has been afflicted by divisive fears that outsiders, mainly those from neighbouring Bengal and Bangladesh, are settling illegally. But tensions have worsened since the BJP came to power in the Assam state government in 2016, with Bengali Muslims finding themselves increasingly ostracised and demonised as the “outsiders” and “infiltrators”.

Bengali Muslims have suffered most from the National Register of Citizens (NRC), a citizenship survey carried out by the BJP government in 2019, on all residents of Assam to identify those deemed to be illegal immigrants. While over a million Bengali-origin Hindus and Muslims, many who had been born in Assam, found themselves left off the register, an amendment to the citizenship law by the BJP government means that Hindus not on the NRC will likely be able to apply for citizenship anyway, leaving Muslims facing statelessness, expulsion or detention.