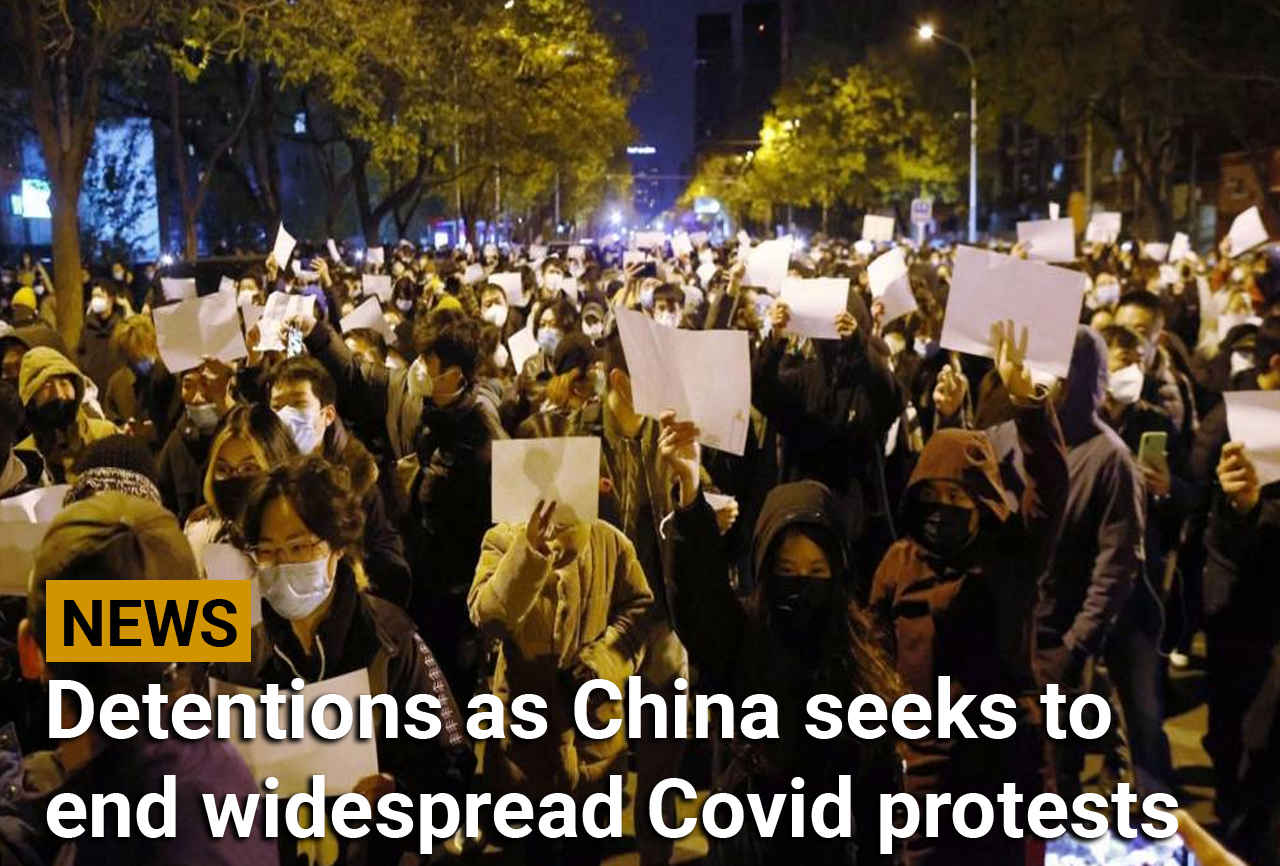 What demands are circulating on social media?

Alongside the people gathering in the streets, a major element of protest in China inevitably takes place on social media – which is heavily censored.

But the “Great Firewall” – as the vast regime of automated and human censors is called by some – is by no means flawless, and protest posts do make it through and circulate before being restricted.

BBC News has seen examples of some images with lists of demands being sent around social media. Some of the demands include calls to:

Since this weekend’s protests, censorship has gone into overdrive on Chinese social media platforms, to stop people seeing and discussing them.

Tens of millions of posts have been filtered from search results, while media are muting their coverage of Covid-19 in favour of upbeat stories about the World Cup and China’s space achievements.

Blanket censorship began with the names of cities and specific streets where demonstrations were staged.

Only some 900 comments can now be seen since the beginning of time mentioning “Shanghai”, all from government accounts – so even innocuous posts about regular life are filtered.

Previously there were close to 40 million posts available to view. Only four results show for “Urumqi Road”, the site of a huge protest in the city.

As Chinese netizens have long found creative ways to bypass government filters, censors are engaged in a cat-and-mouse game to filter cryptic ways people discuss these movements. Searches for “blank sheet of paper” and “white paper” are now also only sparingly showing results.

After three years of strict measures, and the number of lockdowns only increasing in the country, it’s been evident in recent weeks that people have never felt more frustrated with strict lockdowns – especially seeing the rest of the world gathering to celebrate the World Cup without masks or social distancing.

Professor Steve Tsang, Director of the China Institute at the School of Oriental and African Studies in London says the Chinese government risks losing control if the Covid protests across China spread more widely.

If President Xi Jinping fails to repress the demonstrations, it will show “signs of weakness” and that would lead to more protests, Tsang says.

“If the government does not repress it [the protests] quickly, then the protests are likely to spread quite widely in the cities that have suffered from lockdown.

“In which case the government will risk losing control, and that’s why I don’t think Xi Jinping will allow the Communist Party to lose control,” he says.

Prof Tsang says Xi Jinping could make some changes to the zero-Covid policies, but only after the demonstrations end.

He tells BBC News: “What may happen is that once he has restored order as he sees it in China, he may make some adjustments to remove some of the grievances that motivated a lot of the protesters to go on the streets.

But he said that will have to come after he has “basically repressed the protest”.

It has been much quieter in China today, after protests against the government’s strict anti-covid restrictions spread around the country over the weekend.

Many of the images are coming out of the better-known cities like Shanghai and Beijing, which is where the vast majority of foreign journalists base themselves.

But anti-lockdown protests have also been seen around the country in other major urban areas like Chengdu and Wuhan.

Here are some of the most striking images from a weekend of unusual political unrest in China:

If you’re just joining our coverage of the extraordinary scenes in China, let’s get you up to speed.

Why is this happening?

China remains the only major economy with a strict zero-Covid policy, with local authorities clamping down on even small outbreaks with strict lockdowns, mass testing campaigns, and lengthy quarantines. The latest protests were sparked by a fatal fire in a block of flats in the north-western city of Urumqi which killed 10 people last week.

Protests in China over things like land issues are not uncommon but what is extraordinary here is the scale of the unrest and just how widespread these particular demonstrations have become.

So, where are the protests occurring?

As our Asia reporter Tessa Wong writes, suffering under Covid restrictions has become a unifying experience, breeding anger in many corners of China from major cities to far-flung regions like Xinjiang and Tibet.

And the public outrage has spilled to all corners of China – not just in the capital Beijing or the financial hub Shanghai.

Demonstrations expressing both solidarity with Urumqi and local frustrations have been held in cities including Chengdu, Wuhan, Lanzhou, Nanjing, and dozens of university campuses.

How significant are these protests?

They pose a huge and unprecedented political challenge for Chinese President Xi Jinping and everyone is watching how he will respond.

Large numbers of protesters have been holding up blank sheets of paper – a tactic to protest while avoiding censorship or arrest. But others have gone much further, and directly called on Xi to stand down.

It comes at a time when more openly defiant criticism of the Chinese Communist Party and its leadership has been growing.

The Chinese government has not acknowledged the protests or responded in any formal way, however. Despite heavy censorship, news of the demonstrations, videos and pictures have been spreading through social media and messaging apps.

It’s now about 8:30pm in Beijing, and we’re closely watching the situation to see whether further protests take place this evening. If you’re just joining us or need a re-cap, here’s the latest: