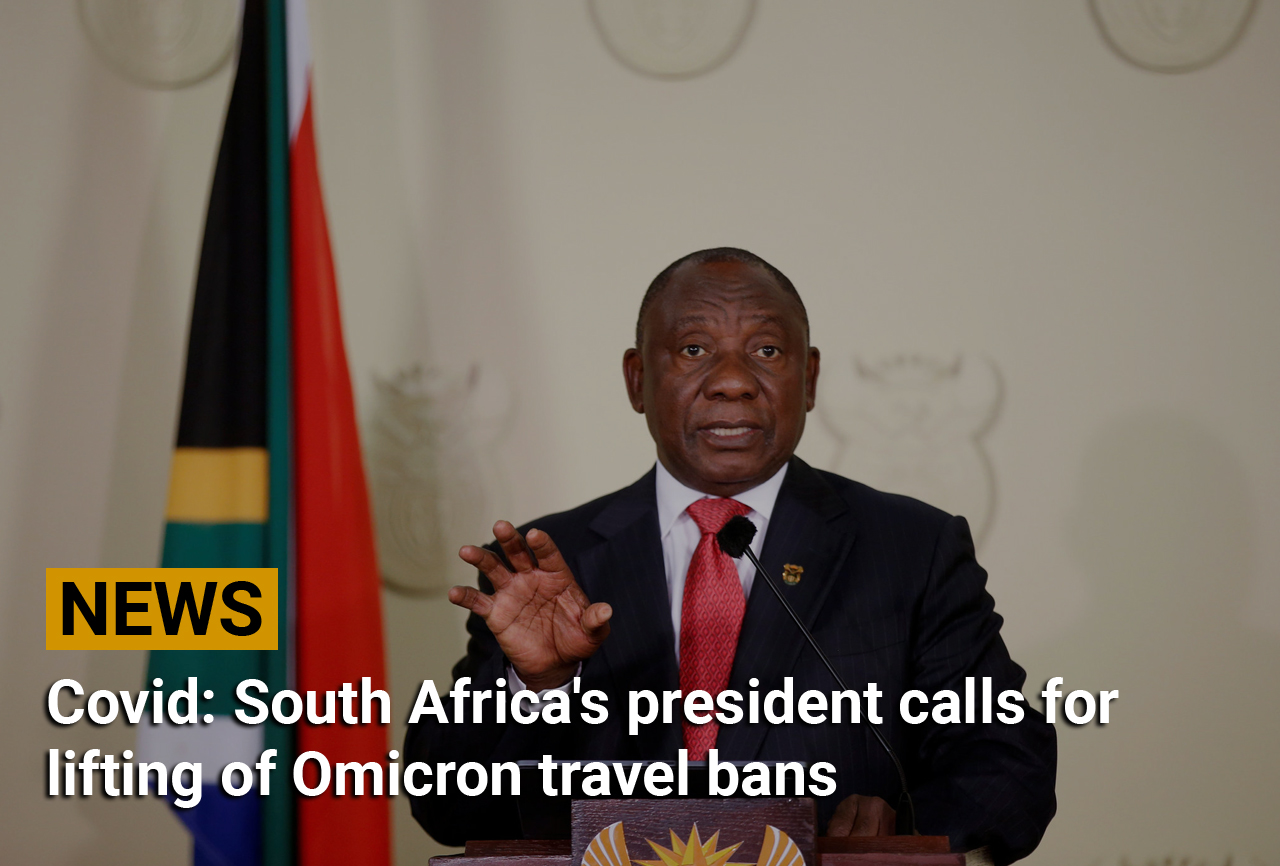 Cyril Ramaphosa: “We are deeply disappointed by the decision of several countries to prohibit travel.”

South Africa’s president has condemned travel bans enacted against his country and its neighbours over the new coronavirus variant Omicron.

Cyril Ramaphosa said he was “deeply disappointed” by the action, which he described as unjustified, and called for the bans to be urgently lifted.

The UK, EU and US are among those who have imposed travel bans.

Omicron has been classed as a “variant of concern”. Early evidence suggests it has a higher re-infection risk.

The heavily mutated variant was detected in South Africa earlier this month and then reported to the World Health Organization (WHO) last Wednesday.

The variant is responsible for most of the infections found in South Africa’s most populated province, Gauteng, over the last two weeks, and the number of cases of “appears to be increasing in almost all provinces” in the country, according to the WHO.

South Africa reported 2,800 new infections on Sunday, a rise from the daily average of 500 in the previous week.

Government adviser and epidemiologist Salim Abdool Karim said he expected the number of cases to reach more than 10,000 a day by the end of the week, and for hospitals to come under pressure in the next two to three weeks.

But Health Minister Joe Phaahla said there was “absolutely no need to panic”.

“We have been here before,” he added, referring to the Beta variant identified in South Africa last December.

On Monday, Japan became the latest country to reinstate tough border restrictions, banning all foreigners from entering the country from 30 November.

The WHO has warned against countries hastily imposing travel curbs, saying they should look to a “risk-based and scientific approach”.

However, numerous bans have been introduced in recent days, with Rwanda and Angola being among the African states to restrict flights to and from South Africa.

Foreign ministry spokesman Clayson Monyela described their decision as “quite regrettable, very unfortunate, and I will even say sad”.

In his speech on Sunday, Mr Ramaphosa said there was no scientific basis for the travel bans and that southern Africa was the victim of unfair discrimination.

He also argued that the bans would not be effective in preventing the spread of the variant.

“The only thing the prohibition on travel will do is to further damage the economies of the affected countries and undermine their ability to respond to, and recover from, the pandemic,” he said.

He called on countries with bans in place to “urgently reverse their decisions… before any further damage is done to our economies”.

There are no vaccine shortages in South Africa itself, and Mr Ramaphosa urged more people to get jabbed, saying that remained the best way to fight the virus.

Health experts said that Gauteng, which includes Johannesburg, had entered a fourth wave, and most hospital admissions were of unvaccinated people.

Omicron has now been detected in a number of countries around the world, including the UK, Germany, Australia and Israel.