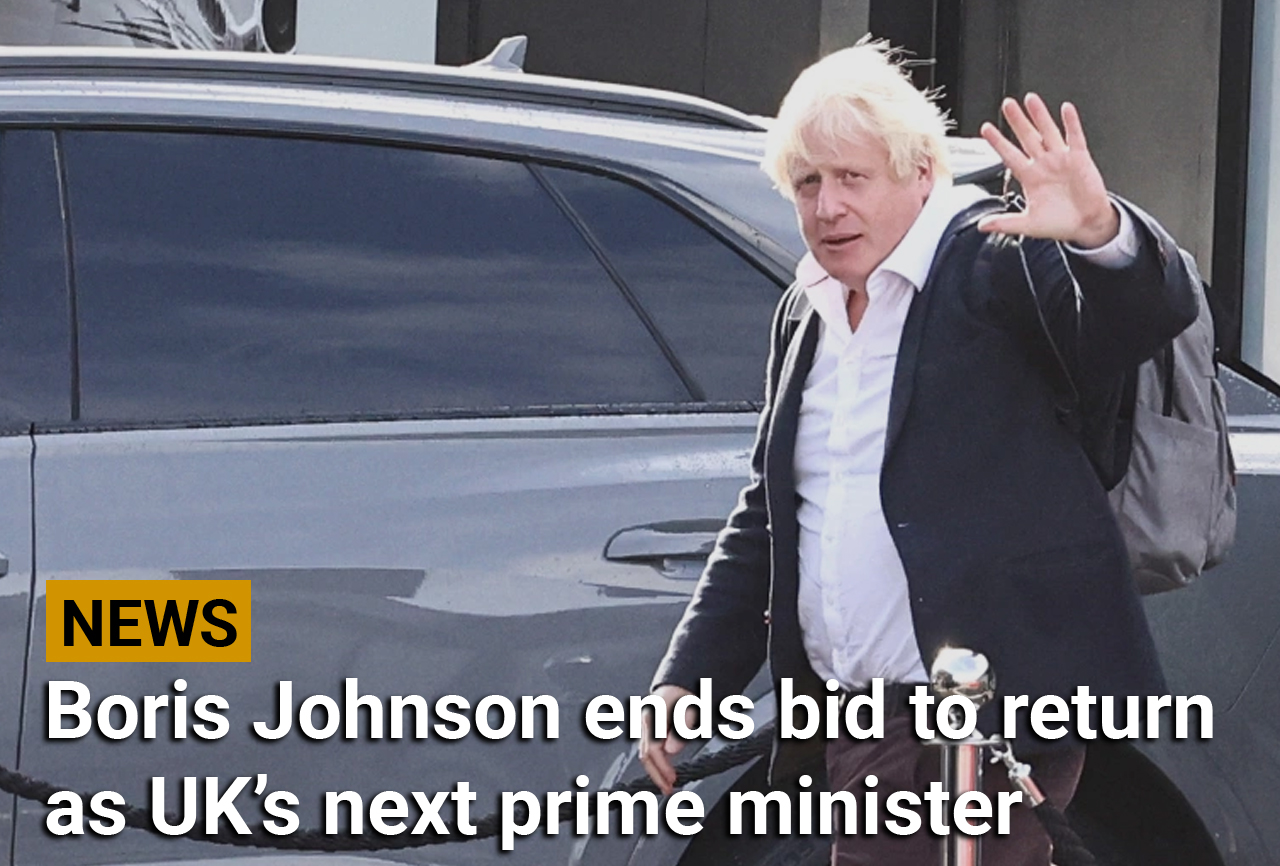 Former prime minister pulls out of race to lead the UK, making Rishi Sunak the strong favourite for the top job

Former British Prime Minister Boris Johnson has dropped a bid to lead the Conservative Party, ending a short-lived, high-profile attempt to return to a job he was removed from little more than three months ago.

His withdrawal on Sunday leaves former Finance Minister Rishi Sunak the strong favourite to become the United Kingdom’s next prime minister — the third this year — at a time of political turmoil and severe economic challenges.

Johnson had raced home from a holiday in the Caribbean to try and secure the backing of 100 legislators to enter the contest to replace Liz Truss, the woman who succeeded him in September after he was forced to quit over a string of scandals.

He said late on Sunday that he had secured the backing of 102 legislators and could have been “back in Downing Street”, but that he had failed to persuade either Sunak or the other contender Penny Mordaunt, to come together “in the national interest”.

“I believe I have much to offer but I am afraid that this is simply not the right time,” Johnson said.

The former prime minister had secured the public backing of just less than 60 Conservative legislators by Sunday, well under half of the nearly 150 endorsements Sunak had received.

Johnson’s statement likely paves the way for his archrival, the 42-year-old Sunak, to become prime minister, possibly as soon as Monday.

If confirmed, he would replace Truss, who was forced to resign after she launched an economic programme that triggered turmoil in financial markets. According to the rules, if only one candidate secures the backing of 100 Conservative legislators, they will be named prime minister on Monday.

If two candidates pass the threshold, they will go forward to a vote of the party membership, with the winner announced on Friday, just days before new Finance Minister Jeremy Hunt lays bare the state of the country’s finances in a budget plan due to be released on October 31.

That had raised concerns that Johnson would return to Downing Street with the backing of the party members and not a majority of legislators in parliament, leaving the party badly divided. Hunt declared his backing for Sunak late on Sunday.

Some Johnson supporters could switch to Mordaunt, who has presented herself as the unity candidate, but many immediately switched to Sunak. A source close to the Mordaunt campaign said the former defence minister would continue in the contest.

“She is the unifying candidate who is most likely to keep the wings of the Conservative Party together,” the source said.

Johnson has loomed large over UK politics ever since he became mayor of London in 2008 and went on to become the face of the Brexit vote in 2016. While he led the Conservative Party to a landslide election in 2019, he was forced out just three years later by a rebellion of his ministers.

Sunak said he hoped Johnson would continue to contribute to public life “at home and abroad”.

One Sunak supporter, who asked not to be named, told the Reuters news agency that his main reaction was relief because if Johnson had won, the “party would have torn itself apart”.

Another Conservative legislator, Lucy Allan, said on Twitter: “I backed Boris for PM, but I think he has done the right thing for the country.”

Cabinet office minister Nadhim Zahawi, who minutes earlier had published an article on the Daily Telegraph website praising Johnson, said “a day is a long time in politics”.

“Rishi is immensely talented, will command a strong majority in the parliamentary Conservative Party, and will have my full support and loyalty,” he said.

Earlier, many of the Conservative legislators who normally back Johnson switched their support to Sunak, saying the country needed a period of stability after months of turmoil that has sparked headlines – and raised alarm – around the world.

Johnson is also still facing a privileges committee investigation into whether he misled parliament over Downing Street parties during COVID-19 lockdowns. He could be forced to resign or be suspended from office if found guilty.

Alex Deane, a Conservative commentator, said despite Johnson dropping his comeback bid, many people in the UK believe he could still run again in the future.

“A week ago we would have been surprised if we were thinking of Boris Johnson becoming our prime minister again very soon. So it’s been a whirlwind of events here in London,” Deane told Al Jazeera.

“Never write off Boris Johnson completely. The political graveyard is littered with the careers of people who say Boris Johnson is finished. Indeed, he’s left the door open for a return down the road in his message to his supporters saying he’s not going to run this time.”

Deane said Sunak, while all but certain to be confirmed as the UK’s next prime minister, faces many challenges.

“The Conservative Party has now brought down three prime ministers in a row. If you were to ask Theresa May, or Boris Johnson, or Liz Truss, I think all of them will tell you, it was people within their own party that they feared the most and we are now going to have our third prime minister in a single year. He’s going to face some questions over legitimacy. You know, people voted in 2019 for Boris Johnson, as prime minister, and not Rishi Sunak. And he’s got a large number of people in the party that weren’t keen on him becoming prime minister. So there’s real challenges, but the biggest issue isn’t actually with Sunak’s behaviour. The biggest issue is going to be the party rallying together and coming behind him.”

Sunak first came to national attention when, aged 39, he became finance minister under Johnson just as the COVID-19 pandemic arrived in the UK, developing a furlough scheme to support millions of people through multiple lockdowns.

“I served as your chancellor, helping to steer our economy through the toughest of times,” Sunak said in a statement on Sunday. “The challenges we face now are even greater. But the opportunities — if we make the right choice — are phenomenal.”

If chosen, Sunak would be the first prime minister of Indian origin in the UK.

His family migrated to the UK in the 1960s, a period when many people from former British colonies arrived to help rebuild the country after the Second World War.

After graduating from Oxford University, he later went to Stanford University where he met his wife Akshata Murthy, whose father is Indian billionaire N R Narayana Murthy, founder of outsourcing giant Infosys Ltd.

Death toll in Sudan tribal clashes rises to at least 220