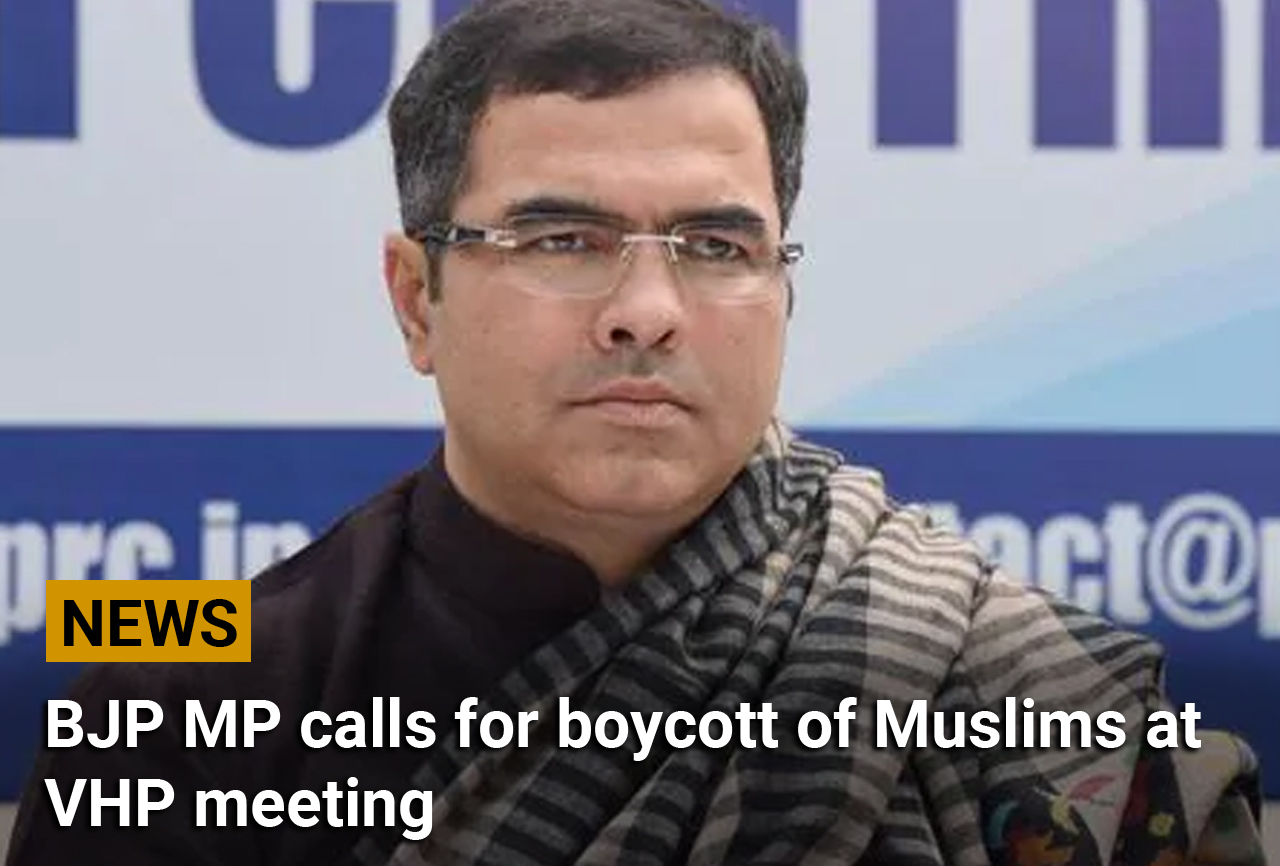 The ‘Jan Akrosh’ meeting was organised by VHP to protest against the murder of Manish, a 25-year-old resident of Sunder Nagri, located near Dilshad Garden, allegedly by three Muslims.

Bharatiya Janata Party (BJP) Member of Parliament from west Delhi Parvesh Sahib Singh Verma on Sunday allegedly called for a “total boycott” of Muslims while speaking at a meeting organised by the Vishwa Hindu Parishad in north-east Delhi’s Dilshad Garden.

The ‘Jan Akrosh’ meeting was organised by VHP to protest against the murder of Manish, a 25-year-old resident of Sunder Nagri, located near Dilshad Garden, allegedly by three Muslims.

In a purported video which was widely shared on the social media, Verma — without naming the Muslim community — is heard saying, “There is no need to buy vegetable from their stalls. They have meat shops; there is a need to close down all the meat shops which are running without licence. If you want to set them straight, the only solution is total boycott. Do you agree? Raise your hands if you agree. Say with me that ‘we will boycott them’. ‘We will not buy anything from their shops, we will not employ them’.”

In another video tweeted by VHP national spokesperson Vinod Bansal, the west Delhi MP is heard saying that “Jihadist” mindset is the reason behind Manish’s murder. “Today, Manish is not with us because of people with jihadist mindset.…our police is capable of taking action and we, Hindus, are also capable of taking action. If we want today, we can teach them a lesson within 24 hours. But we follow the law and have faith in the judicial system,” Verma said.

The Congress slammed the BJP MP for asking people for financial boycott of the Muslims. Congress spokesperson Dr Shama Mohamed tweeted, “BJP MP Parvesh Verma orders the people of Delhi to financial boycott Muslims. Will @DelhiPolice act against this man for inciting hatred amongst communities? Does PM Modi condone this speech? Is this what BJP meant by Sabka Saath Sabka Vikas! Speak up @narendramodi.”

Verma did not respond to queries seeking his comment on the speech.

When contacted, Vinod Bansal said that he wasn’t there when Verma addressed the gathering. “I don’t know what he (Parvesh Verma) has said. But today’s meeting was to protest against the growing attacks against the Hindu community. Five Hindus have been killed in this area alone, and so many in other parts of the city. We have the right to boycott people who attack us (Hindus) and play with our religious sentiments. We are not attacking any particular community; we are opposing the Islamist Jihadist elements, anti-social elements and anti-Hindu mindset. No one targeted the community, but the Jihadist elements.”

A Delhi Police officer privy to the matter, however, said that a ‘Shradhanjali Sabha’ was held for 25-year-old Manish who was killed in Sunder Nagri on October 1. “It was held at Ramlila Ground in Shahdara area. The event lasted three-four hours and was held to pay homage to Manish. No complaint has been received regarding the speeches given at the event. Videos have surfaced in the social media, and we are examining them,” the officer said, asking not to be named.