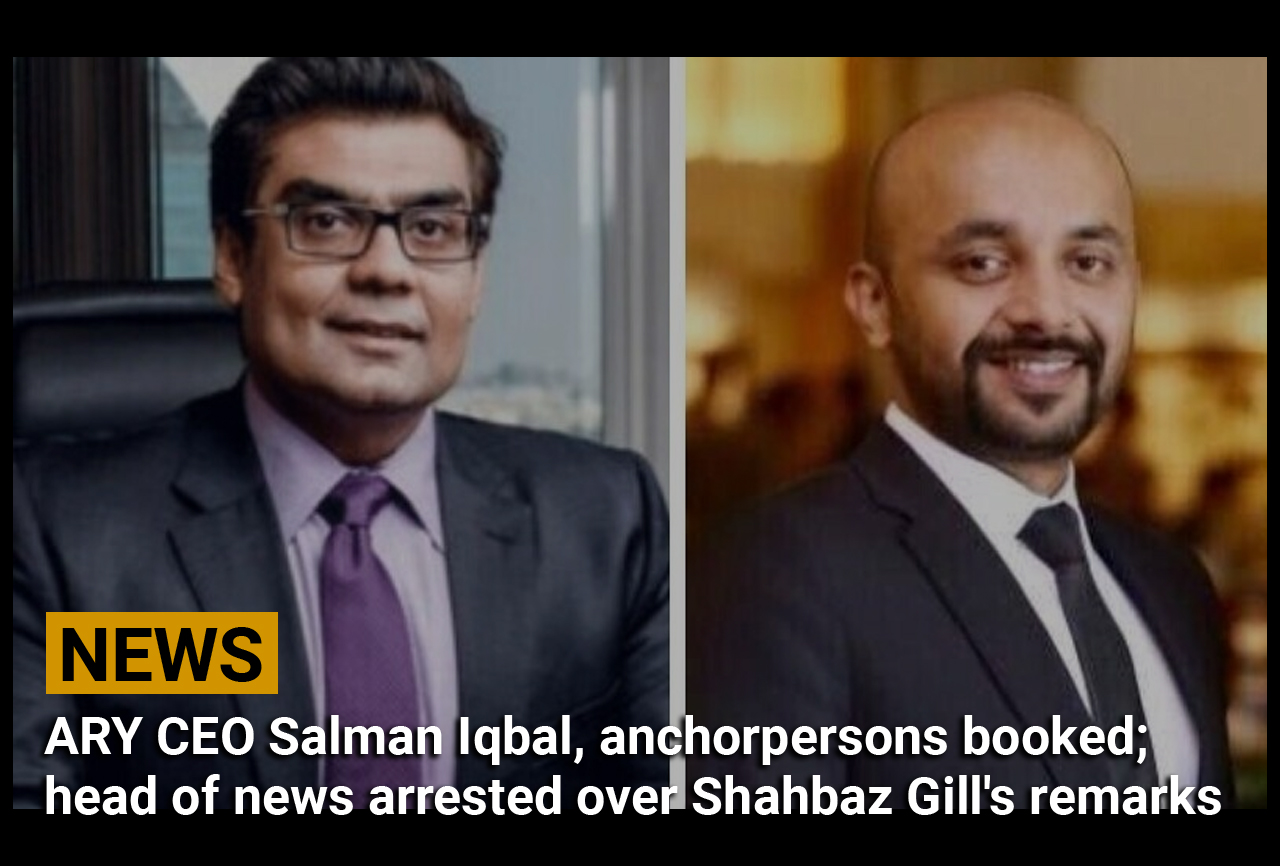 Karachi police have registered a first information report (FIR) against ARY Chief Executive Officer (CEO) Salman Iqbal and others in connection with some controversial remarks made by PTI leader Shahbaz Gill during a news programme, it emerged on Wednesday.

The police have also arrested Ammad Yousuf, the head of ARY News, from his residence in DHA, the news channel reported.

According to a copy of the FIR posted on ARY News website, producer Adeel Raja, Yousaf, and anchorpersons Arshad Sharif and Khawar Ghuman have also been nominated in the case registered on August 8.

The FIR, a copy of which is available with Dawn.com, was registered on behalf of the state by Memon Goth Station House Officer (SHO) Inspector Ateequr Rehman.

It was filed under Sections 121 (waging war against Pakistan), 506 (criminal intimidation), 505 (statements conducive to public mischief), 153 (wantonly provoking with the intent to cause riot), 153-A (promoting enmity between different groups), 131 (abetting mutiny or attempting to seduce a soldier, sailor or airman from his duty), 124-A (sedition), 120 (concealing the design to commit an offence punishable with imprisonment), 34 (common intention) and 109 (abetment) of the Pakistan Penal Code.

The FIR said that a clip of a news bulletin, aired on August 8 by ARY News, had gone viral on social media, in which Gill had made “hateful remarks” against the Pakistan Army.

Sharif and Ghuman participated in the programme as analysts, the FIR said.

It alleged that by expressing such views in the programme, the PTI and ARY News were clearly creating a divide between sections of the armed forces that expressed loyalty to the party and those that did not.

“They are sowing hatred and rebellion in the armed forces,” the complainant further alleged, adding that they were also “threatening government officers against following the government’s directives”.

“This is a pre-meditated, organised conspiracy that is being used to create hatred between the armed forces and government departments in Sindh and other provinces,” the complainant said.

The FIR stated it was evident that individuals who participated in the programme had “perpetrated the conspiracy in collusion with the producer, director and CEO”, and that the acts committed by all these individuals be booked.

“Police officers along with plain-clothed persons forcibly entered the house of Ammad Yousaf. The raiding team diverted the CCTV cameras of Yousaf’s house, and jumped into the house from the top of the main entrance,” the report said.

It added that the raiding team also took away the digital video recorder (DVR) of the CCTV cameras installed at Yousaf’s residence.

Siraj Ahmed of ARY News said that two police mobiles and a double cabin automobile arrived at Yousaf’s residence in DHA at around 2am and entered his home by scaling the wall.

Meanwhile, senior PTI leader Shah Mehmood Qureshi condemned the arrest of Yousaf and suspension of channel’s transmission in parts of the country.

“Pakistan is moving rapidly towards a fascist state where all dissenting voices are muted,” he said in a tweet.

Meanwhile, the Karachi Union of Journalists (KUJ) released a statement today, condemning Yousuf’s arrest and the delay in presenting him before the court.

Separately, KUJ General Secretary Fahim Siddiqi said that there was a “new spell of attacks on journalism” amid the current turbulent political climate, warning that journalists in Karachi should not be forced to protest.

The statement added that the “tactics” being used against ARY News were the same as the ones used against another channel previously and called on whatever was happening in the political realm to be confined to its domain.

A day ago, the Pakistan Electronic and Media Regulatory Authority (Pemra) had issued a show-cause notice to ARY News for airing comments from Gill, that it said were “highly hateful and seditious” remarks tantamount to “incite armed forces towards revolt”.

The notice went on to say that Gill was invited via a telephonic call for his comments and during his talk with the channel, Gill had alleged that the government was trying to provoke the lower and middle tier of the army against the PTI, saying the families of such “rank and file” support Imran Khan and his party “which is fuelling rage within the government”.

He had also alleged that the “strategic media cell” of the ruling PML-N was spreading false information and fake news to create divisions between PTI chief Imran Khan and the armed forces.

Gill had said the government leaders, including Javed Latif, Defence Minister Khawaja Asif and former National Assembly speaker Ayaz Sadiq, had lambasted the army in the past “and they were at the government positions now”.

“The statement made by the guest on ARY News is a violation of Article 19 of the Constitution as well as Pemra laws. Airing of such content on your news channel shows either weak editorial control on the content or the licensee is intentionally indulged in providing its platform to such individuals who intend to spread malice and hatred against state institutions for their vested interests,” the watchdog stated.