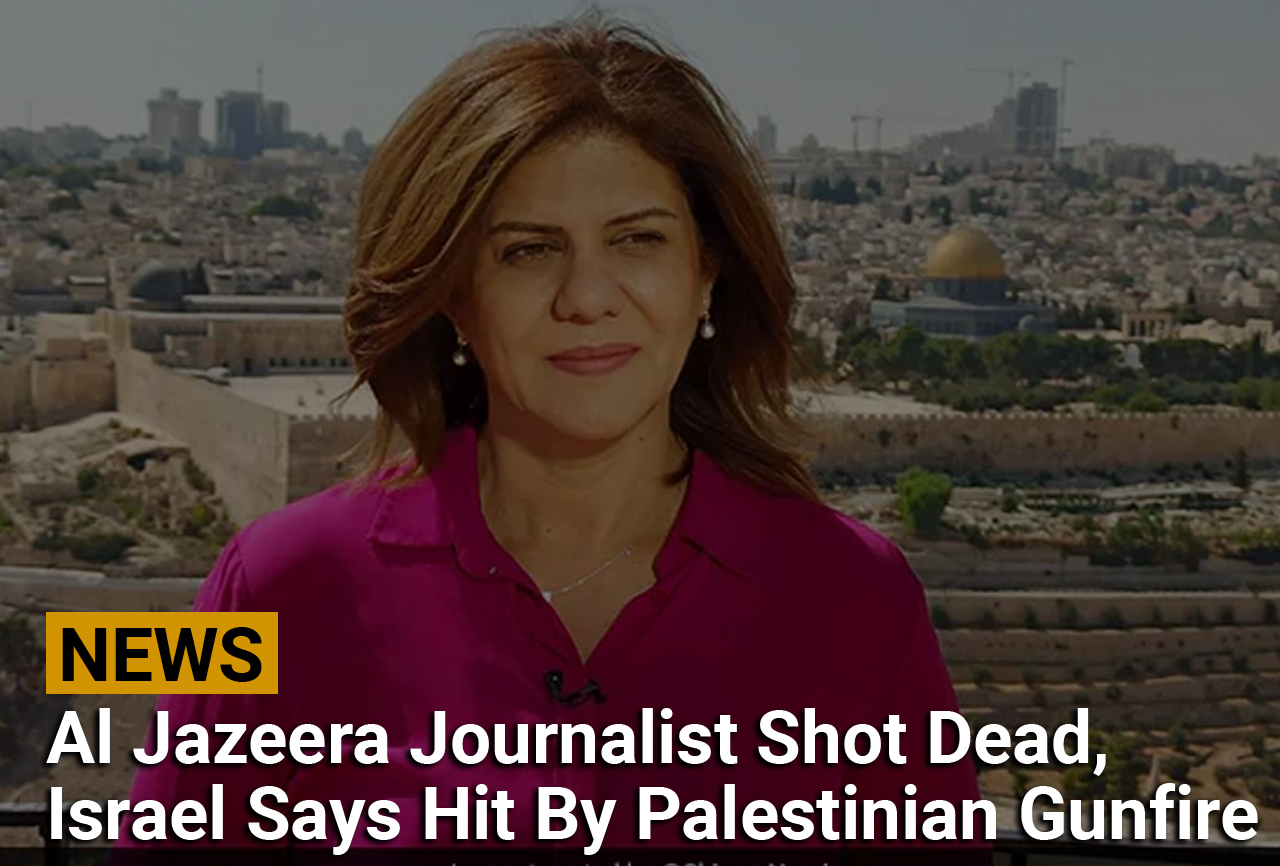 Al Jazeera and the Palestinian health ministry confirmed the death of Shireen Abu Aqleh, 51, a prominent figure in the channel’s Arabic news service.

Veteran Al Jazeera journalist Shireen Abu Aqleh, a Palestinian-American who was among the network’s most prominent figures, was shot dead Wednesday as she covered an Israeli army raid in the occupied West Bank.

The Qatar-based TV channel said Israeli forces shot Abu Aqleh, 51, deliberately and “in cold blood” while she was covering unrest in the Jenin refugee camp.

Israeli Prime Minister Naftali Bennett however said it was “likely” that Palestinian gunfire killed her.

Another Al Jazeera journalist, producer Ali al-Samudi, was wounded in the incident, the broadcaster added.

An AFP photographer said Abu Aqleh was wearing a press flak jacket when she was shot. The photographer reported that Israeli forces were firing in the area and then saw Abu Aqleh’s body lying on the ground.

There were no Palestinian gunmen visible in the area when Abu Aqleh was killed, the AFP photographer added.

The Israeli army confirmed it had conducted an operation in the camp early Wednesday but firmly denied it had deliberately targeted a reporter.

The army said there was an exchange of fire between suspects and security forces and that it was “investigating the event and looking into the possibility that journalists were hit by the Palestinian gunmen”.

“The (army) of course does not aim at journalists,” a military official told AFP.

It called on the international community to hold the Israeli forces accountable for their “intentional targeting and killing” of the journalist.

“Journalists must be protected in conflict zones and we all have a responsibility to get to the truth,” Lapid added.

Senior Palestinian Authority official Hussein al-Sheikh said there had been no contact from Israel about any joint probe and held Israel “responsible” for Abu Aqleh’s killing.

In a sign of her prominence in the West Bank, residents laid flowers on the roadside as the vehicle carrying her body moved towards Nablus, where an autopsy was scheduled before her burial in her native Jerusalem.

US ambassador to Israel Tomas Nides called for a “thorough investigation” into the killing of the US citizen.

The Israeli premier said: “According to the information we’ve gathered, it appears likely that armed Palestinians – who were indiscriminately firing at the time – were responsible for the unfortunate death of the journalist.”

The wounded Al Jazeera producer, Samudi, said there were no Palestinian fighters in the area where Abu Aqleh was shot.

“If there were resistance fighters, we would not have gone into the area,” he said in testimony posted online.

In recent weeks, the army has stepped up operations in Jenin, a historic flashpoint in the Israeli-Palestinian conflict. Several of the suspects blamed for deadly attacks on Israelis in recent weeks were from the area.

The army said that during its operation in the camp, “massive fire was shot toward Israeli forces by tens of armed Palestinian gunmen”.

The fatal shooting comes nearly a year after an Israeli air strike destroyed a Gaza building that housed the offices of Al Jazeera and news agency AP.

Israel has said the building also hosted offices used by key members of the Hamas Islamist group, which controls the Israeli-blockaded Gaza strip.

Tensions have risen in recent months as Israel has grappled with a wave of attacks which has killed at least 18 people since March 22, including an Arab-Israeli police officer and two Ukrainians.

An 18-year-old Palestinian was killed by Israeli troops during clashes near Ramallah on Wednesday. The army said its forced had used rubber bullets.

Wednesday’s deaths brought the number of Palestinians killed since March 22 to 31, according to an AFP tally.

Three Israeli Arabs have died during the same period, according to an AFP tally, among them perpetrators of attacks and those killed by Israeli security forces in West Bank operations.

“Why Not Let Him Go?”: Court Raps UP Over Samajwadi’s Azam Khan’s Plea